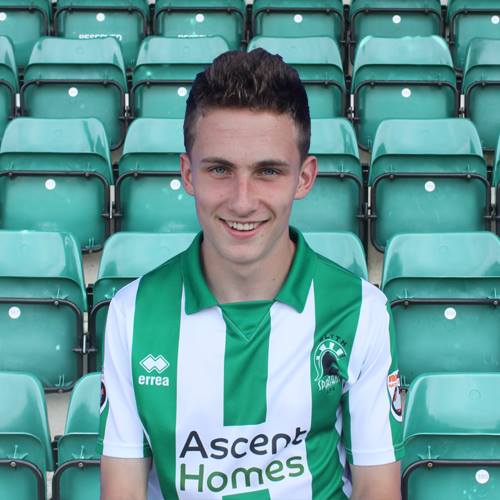 Blyth Spartans continued preparations for the new campaign with a comfortable 4-1 victory away at EBAC Northern League Division one side Dunston UTS – managed by former Spartan Chris Swailes.

Newly signed striker Bradley Fewster netted twice, adding an assist to a stunning Jack Butler finish – who also netted a brace – as the Blyth squad got vital minutes into their legs in this pre-season encounter.

The only blemish on the evening was when Peter Jameson scythed down UTS’s Jordan Nellis later in the second half – Dale Burrell converting.

The first chance fell to the aforementioned Buddle who rose highest at a Spartans corner in the third minute, but mistimed his leap, seeing his header sail over the crossbar. The game ebbed and flowed for a while before Spartans almost broke the deadlock with a swift counter-attack after quarter of an hour.

Adam Wrightson broke down the right flank before finding Fewster on the edge of the area. He looked to have given the Spartans the lead with a curling 20-yard effort – only to be denied by the fingertips of a diving Niall Harrison, himself a former Spartan.

Three minutes later Wrightson was causing mischief again – latching on to an exquisite through ball from right-back Nicholson – marauding into the penalty area before trying to place the ball past Harrison, only to be denied by the big frame of the Dunston ‘keeper.

The first opportunity of note at the other end was a long-range effort from Liam Brooks which whistled past the upright of Jameson. On 27 minutes young right-winger Jack Elliott almost created an opening for the hosts – working in tandem with Brooks down the right – his pulled back cross evaded everyone in the Spartans’ penalty area, eventually cleared by Nicholson.

Wrightson and Fewster both went close before the break, and then in first half injury time the former Middlesbrough Academy product beat the offside trap before calmly side footing past Harrison into the bottom right hand corner, a sublime one-on-one finish from the new man.

The pace dropped slightly to begin the second half, but the introduction of 17-year-old forward Jack Butler provided dividends for Alun Armstrong as he doubled the lead on 52 minutes. With the ball bobbling around the penalty area, Butler reacted quickest to prod home from close range.

Two minutes later Fewster added his second of the game with an incredible finish from an acute angle, somehow beating FA Vase winning goalkeeper Karl Dryden from the left edge of the six-yard box.

The youthful pair of Neal Hooks and Pascal Chimbonda – the former Tottenham Hotspur and Sunderland defender looking to build fitness by training with the club – were introduced around the seventy-minute mark, and the host were given a lifeline five minutes later when Jordan Nellis was tripped by Jameson.

Dale Burrell stepped up and converted the penalty high into the top left-hand corner – Jameson guessing the right way but unable to get close to saving it.

Four minutes from time, Fewster picked out the run of Butler on the edge of the area, the England Schools’ international hitting a rasping first time effort into the right-hand corner of Dryden’s net, a stunning finish to end the scoring.

Alun Armstrong was pleased with the performance from his side but insisted he’s not the biggest fan of pre-season.

“It serves its purpose,” stated the 43-year-old, “It was a difficult game in difficult conditions after the heat we’ve had over the last month or so, and it was red hot out there today.

“I’m not a big fan of pre-season, you can’t replicate the realism and toughness of league football, but it does it’s job in getting the fitness levels up.

“We played some good football at times, created a few chances, and it was good to see Bradley and young Jack Butler get on the scoresheet.

“We need to be patient with Jack, he’s a huge talent but has a lot to learn, it’s going to be a big year for him – but we can’t expect the world.”

Alun also spoke about his summer signings, and how they looked in their first out of house test of the season.

“It’s going to take Nicca a few weeks to get his fitness levels up, we all know how good he is going forward but we’ll have to work on the defensive side of his game.”

“I thought Jamie Holmes was bright and linked up well with Bradley, and everyone knows what a talent Greeny is, he’s going to be huge for us this season.”

Spartans’ next fixture is a home game against Ashington FC on Tuesday 17th July, a 7.30pm Kick-Off.