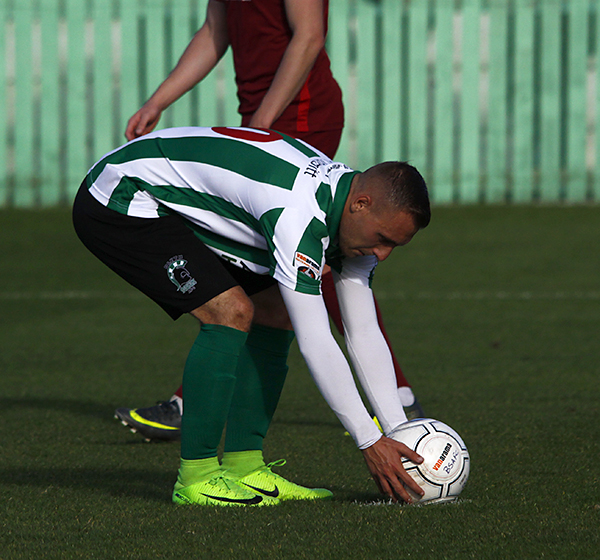 An unusually early start was matched by an unusually poor Spartans performance – as Blyth were comprehensively beaten 4-1 by Bradford Park Avenue on Saturday afternoon.

Played out four days after Halloween, Spartans’ horror show started with a defensive error just two minutes in that allowed Wayne Brooksby to open the scoring. Oli Johnson then profited from more frightening defending on the stroke of half time to double Bradford’s lead.

A catalogue of defensive mistakes for Blyth continued after the break, with Jamie Spencer and Adam Boyes profiting to put the hosts 4-0 up. Robert Dale then converted a free kick in the 70th minute, but it proved to be nothing but scant consolation in what was a thoroughly miserable afternoon for Spartans in this Vanarama National League North meeting.

Blyth named an unchanged starting 11 to the side that beat Darlington 3-1 seven days earlier. England C striker Daniel Maguire made a welcome return to the bench following injury, while David Atkinson’s international clearance saw him take his place in the away dugout as well.

The game kicked off at 1pm – due to issues with the floodlights at Horsfall Stadium – and it seemed the early start caught Spartans half asleep – as a short free kick back to Peter Jameson from Ryan Hutchinson on three minutes spelled disaster for the visitors.

The Spartans stopper returned the ball to Hutchinson inside the box, but he was caught in possession and mis-kicked his clearance under pressure and the ball fell straight to Boyes. The Avenue striker played the ball across the box and Brooksby drilled the ball past Jameson to put the hosts ahead.

Brooksby then found the back of the net again a minute later, but a potential crisis was averted by Blyth – as they had the assistant to thank for raising his flag for offside against the winger.

Spartans had to wait until the seventh minute before they could really test Steven Drench for the first time. Adam Wrightson produced a good run in the Park Avenue half to get to the edge of the box, but his shot was straight at the keeper.

With the tenth minute approaching, Johnson leapt up with a free header from a corner. It caused a bit of worry for the Blyth back line, but the ball was finally cleared away off the line.

Jameson was then called into action seven minutes later, when Nicky Clee found space 18 yards out and unleashed a fierce strike towards goal. The former Darlington stopper saved well and then tried to set up a counter attack with a quick throw out.

That attack was stopped following a foul on Wrightson on the edge of the Bradford box. Hopson’s resulting free kick then created a bit of drama down the right end for the away side.

Hopson hit the wall with his initial effort, but his drilled rebound attempt bounced off a green body and into the feet of Rivers. The winger’s low shot produced a fine save from Drench, before the home side eventually cleared their lines following a goalmouth scramble that nearly saw David McTiernan convert with a back-heel.

Johnson then had two good chances to double the lead, but he ballooned his near post header well off target on 23 minutes. The striker capitalised on Andrew Cartwright’s slip two minutes later to create a chance on the left, but the shot was blocked behind by Buddle.

A great switch from Hopson beat Graham Kelly to release Rivers down the right. The former Blackpool man jinked in and out to try and create a scoring opportunity, but Shane Killock intercepted possession before Rivers could shoot.

Lovely skill from Bradford nearly put the hosts 2-0 on the half-hour mark, when Clee picked out Johnson in the box and the striker laid the ball off for an advancing Brooksby. Trying his luck from just a few yards out, the opening goalscorer was denied a second by another last-ditch block by Buddle.

Blyth frustrated the home side with another defensive block five minutes later. Clee struck well after cutting in from the right, but Ian Watson diverted the ball out for a corner off his back.

Sean Reid had a chance to put Spartans level on 37 minutes, when he picked up Dale’s cross at the far post. Opting to strike from a tight angle, the lofty midfielder could only find the side netting.

Alun Armstrong’s side broke forward once more 60 seconds later with Hopson, who had Wrightson in support. The former Whitby Town man opted to go himself and have a go from the edge of the area, but his low drive trickled past the post.

The resulting goal kick caused confusion for the Blyth defence and Brooksby nearly capitalised on it. Gambling well to get on the long ball first, the winger tried to lob Jameson with a shot over his head that dropped wide of the open goal.

Less than a minute later, Blyth were unlucky not to score. Buddle rose well above his man to power a header at goal, but Drench palmed the goal-bound ball away with an instinctive stop.

Bradford could count themselves unlucky not to be 2-0 up just before half time, when Nicky Wroe’s shot from 18 yards hit cannoned off the post. Boyes looked to profit from the rebound two yards out, but the ball bounced off his shin before Jameson claimed the ball at his feet.

They weren’t cursing that missed chance for long though – as Blyth gifted them another goal in first half added time with another example of dreadful defending.

After losing the ball far too easily in midfield, the visitors were all at sea as Bradford advanced up the field once more – as Wroe sprayed the ball wide to Clee. The winger crossed low across the face of goal and Johnson was there at the back post to tap into an empty net and compound another Spartans mistake.

Not deterred after hitting the upright before the break, Wroe fizzed another strike at goal from 18 yards on 52 minutes. However, the ball just evaded the top of the bar with Jameson diving across thinking it was going to cause more problems than it eventually did.

The Blyth goalkeeper was then caught out moments later when racing out to claim a hopeful ball forward, but he was beaten to it by Boyes. The striker cut back inside the area and laid the ball back to Spencer, who picked his spot perfectly through a number of Blyth bodies to score his first goal for the club.

Just prior to the hour mark, a hopeful Cartwright raced down the right before cutting inside – following a one-two with Reid. The right-back got himself into a good position just outside the box, but his attempt was far from troubling for Drench.

With 61 minutes gone, Blyth really should have pulled a goal back. Rivers drifted in from the left and forced a good low save from the Bradford keeper. Substitute Maguire – who’d replaced Hopson five minutes earlier – tried to control the rebound and then left it for Dale, who uncharacteristically smashed the ball off the crossbar from a couple of yards out for what was a rare miss for the Spartans captain.

Things then got even worse for the away side, when Jameson was caught in no man’s land trying to claim a hoofed ball forward again – as Atkinson try to get in ahead of Boyes. Boyes won possession following the mix-up and rolled the ball into the empty net, despite Atkinson’s best efforts to hack the ball away from goal.

Dale’s low free kick on 69 minutes failed to beat the wall, but referee Simon Mather raced forward and booked Spencer for encroaching on the ball early. The retaken set-piece a minute later finally provided some joy for Blyth – as the talismanic winger more than made up for his earlier miss.

Dale stepped up again and drilled the 18-yard free kick low again, but this time found a gap in the wall – as Drench was helpless to stop the ball going past him in the middle of his goal.

Dale then picked the ball up in space two minutes later and tried another drilled shot from distance, but his shot was always rising and flew past the goal.

Spartans were now throwing bodies forward in a desperate effort to try and get something from the game and substitute Greg Rutherford was next to try his best to score, when a 75th minute corner ran through to him 12 yards out. He tried to best Drench with a half-volley, but he wasn’t able to find the target.

Wrightson once again shot from the edge of the box on 86 minutes looking to force a late fightback, but Drench get his body behind the ball and held well to deny him.

Blyth continued to advance upfield, but their attacking gamble didn’t work out – as a four-goal deficit was too much of an ask for the away side to come back from and Bradford were able to deal with everything that Spartans threw at them in the final few minutes.

To add insult to injury, Maguire was then forced off in the closing moments – as a precaution to avoid a reoccurance of the injury he was returning from. With all three substitutes used, Blyth were left to finish the game with ten men on what was a thoroughly depressing afternoon for the travelling Spartan army.

Armstrong will look for a marked improvement from his side when they welcome Leamington to Croft Park next Saturday, for a traditional 3pm kick off.