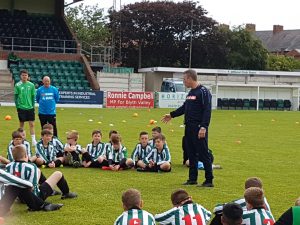 Blyth Spartans Juniors visited Croft Park on Sunday where they registered for their respective teams for the coming season and then enjoyed a training session led by Spartans manager, Lee Clark.

The session was organised as part of the Club’s new football development pathway initiative, which ultimately provides a recognisable route through the various age groups of junior football to the first team.

Another part of the pathway is the recent partnership entered into with Tyne Met College. That will allow local youngsters of school leaving age to develop their football skills while studying an educational or vocational qualification. 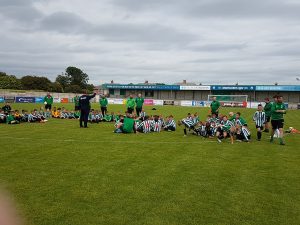 The Club’s reserve team, currently playing in the Northern Alliance First Division, is another stepping stone in the pathway. Youngsters will be given their first taste of adult football as they begin their transition from junior football to the rough and tumble of life in the adult leagues.

The pathway is a long term plan which looks to build on the existing infrastructure within the Club and give youngsters the best possible opportunity to represent the Spartans at first team level.

As part of the plan to develop closer links with the Clubs junior teams, all players will be allowed free entry to all of Spartans league fixtures for the coming season when accompanied by a parent/guardian who will be admitted to the game for the concessionary admission price.

Lee bought into the development pathway as soon as he joined the Club and willingly gave up his Sunday morning to pass on the benefit of his considerable coaching experience to the youngsters and their regular coaches.

Further initiatives will be announced during the season as the Club looks to build on a very successful start to the pathway.