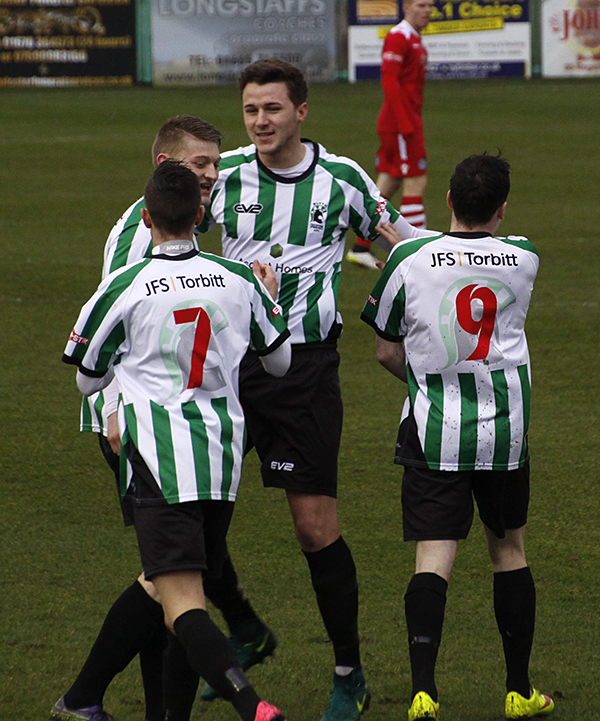 Blyth Spartans had to endure extra time before they could celebrate their passage into this season’s Techflow Senior Cup final – as Daniel Maguire’s double helped ensure that they finally prevailed 5-2 in an entertaining derby against Blyth Town.

The two sides couldn’t be separated after 90 minutes, in the first competitive meeting between the pair at South Newsham Pavilion – after Ryan Hutchinson’s second half deflection was cancelled out by a late penalty by substitute Gary Day.

Spartans’ quality shone through in extra time though – as a brace from Maguire and goals from Sean Reid and Adam Wrightson ensured former Spartan Zak Atkinson’s tap in soon after had no bearing on the result.

Alun Armstrong made six changes to the side that beat Stourbridge 2-1 on Saturday, with Matty Pattison returning from injury and Michael Liddle and Andrew Cartwright named as full-backs. Assistant manager Neal Hooks was named as centre-back behind Damen Mullen, while Wrightson started for the first time since his loan spell was renewed.

The two sides spent the opening few minutes feeling each other out in only the second competitive Blyth derby, but Spartans went close to scoring within the first four minutes. Robert Dale chipped a ball over to Maguire at the back post, but John Grey beat him in the air to head behind.

Dale was involved once again with ten minutes gone, when a great ball from Maguire released the winger down the left. Spartans’ captain got into the area and cut the ball back across goal from the byline, but none of his teammates were there to meet it.

Liddle did well to beat his man 60 seconds later, but his cross was blocked by Michael Tumilty. The Spartans bench shouted for a penalty for handball, but referee Paul Brown was unmoved in the middle.

It took 12 minutes for Town to register their first real chance, through a speculative strike from outside the area. Dean Walker struck at goal, but the ball rolled comfortably through to a grateful Paul Woolston.

With the 20th minute approaching, Wrightson made the most of some hesitation in midfield to have a run at goal. After cutting inside and riding the challenge of three Town players, the right winger’s shot bounced off the foot of the post with a sprawling Matty Crook well beaten.

Pattison’s shot/cross from a free-kick on the right soon looked to have gone straight in, soon after. However, the ball hit the back of the netting via the fence behind the goal – as some Spartans fans in the main stand appeared to celebrate amid the confusion.

Armstrong’s side went close once more on 26 minutes, when Hutchinson turned Pattison’s corner towards goal. Town’s Ian Herron was there on the near post to hack it away off the line though.

Dale cut inside just before the half-hour and tried to curl one into the top corner around Crook, but he would have been disappointed not to have tested the former Spartans stopper – as he shot well wide.

A slip from Andrew Cartwright on halfway was capitalised on by Town, with the ball then being cut back to Walker 18-yards out. The Town midfielder tried to find a way past Woolston, but could only watch as the ball just cleared the crossbar.

A wayward clearance from Crook was plucked perfectly out of the air by Dale, whose driving run took him into the Town box once more. He tried to curl one inside the far post from a tight angle, but couldn’t get enough on it to find the target.

Reid met Pattison’s corner at the near post with three minutes of the first half to go, before Liddle’s cross just evaded the head of Maguire moments later.

The Northern League Division Two side had done well to keep the Spartans at bay for 45 minutes and nearly went ahead in added time, when Pattison’s interception in the Spartans area landed at the feet of David Robinson. The striker hit a fierce first-time effort across Woolston, but could not find the back of the net – as the two sides went in level.

Spartans were almost gifted a goal by their close neighbours within two minutes of the restart, when Cartwright played in Reid. The lofty midfielder’s scuffed shot was spilled by Crook, but he recovered to claim it at the second attempt.

An unconventional corner from Pattison saw Reid loop it back towards goal at the back post. Town were forced to boot it off the line under pressure from Maguire, before Wrightson’s rebound went wide.

An extended spell of dominance from the Evo-Stik Premier League leaders nearly saw them break down Town’s resolve on 52 minutes. Pattison’s cross was cleared to Dale, who forced Crook into a firm punch at the near post from a tight angle.

Wrightson was found free on the right and managed to avoid being wiped out by Grey in the area. The winger tried to pick out Maguire at the back post, but ‘Nipa’ once again saw the ball sail just over his head.

The unlikely figure of Cartwright played a fantastic defence-splitting pass through for Reid, who equally impressed with a back-heel into the path of Maguire in the area. Unfortunately, Spartans’ top scorer got the ball caught up in his feet, before a tame effort was comfortably claimed by Crook.

Pattison played in a brilliant ball from a free-kick on the right just after the hour mark, which was met confidently by a leaping Reid. However, his powerful header went just wide.

Just when it looked like Spartans would never get their just rewards for a strong start to the second half, the visitors went ahead in somewhat fortunate circumstances on 66 minutes.

A goalmouth scramble ended with the ball rolling out to Mullen, who looked to test the Town keeper. The strike struck the foot of Hutchinson, which wrong-footed Crook and ended up in the back of the net.

Mullen tried another long-range drive with 19 minutes to go, which almost helped justify Spartans’ decision to release Crook five years ago – as he once again spilled the shot and just about recovered before Maguire could feed on the scraps.

Crook then came to punch clear a cross, but made a complete mess of it. Luckily for the Town stopper, Spartans were unable to make the most of his latest mistake.

With the away side seemingly set to cement their Techflow Group Northumberland Senior Cup final spot at St James’ Park against North Shields, they were brought back down to Earth with a bang – as former Spartan Atkinson drew a foul in the area from Hooks on 85 minutes, despite a shove by the striker on Cartwright seconds earlier. Day stepped up to smash the spot-kick straight down the middle of Woolston’s goal, with the keeper diving away to his right.

Cartwright’s luck didn’t improve two minutes later, when he was shoved to the ground once more in the Town box. Even though there were loud shouts from Spartans for a penalty, Brown ruled out the award of another late spot-kick.

With time running out, Wrightson had a shot headed desperately off the line. Mullen then had a shot blocked away by a flailing Town leg in added time – as the two sides cancelled each other out after 90 minutes.

An incensed Spartans started extra time looking to settle the tie as quickly as they could, but an air-shot from Dale and a fluffed volley attempt from Wrightson saw them fail to make the most of two good positions.

The visitors were throwing everything at their lower league neighbours, but were left frustrated when Wrightson and Mullen had shots blocked, before Cartwright fired a long-range follow up just wide on 95 minutes.

Town’s defence was finally broken once again two minutes later though – after a great one-two between Maguire and Reid played the former in. The striker finished calmly when one-on-one with Crook, to score his eighth goal in eight consecutive games.

Things got even better for Spartans just 60 seconds later – as Maguire doubled up with an equally impressive goal. ‘Nipa’ skipped past two, before firing low and hard into the corner to extend his side’s lead.

Even after Maguire’s withdrawal straight after his second, the away side grabbed a fourth goal as the clock ticked past the 100-minute mark. Reid finally found the target with a header, to nod home Dale’s cross.

After just one minute of the second half of extra time, Armstrong’s side went even further ahead. Wrightson celebrated his loan extension by slipping the ball in with ease, under an advancing Crook.

Despite being shell-shocked at the barrage of goals Crook had conceded, Town continued to push forward and Atkinson grabbed a goal against his former side on 117 minutes – as he tapped in from a cut-back on the byline.

Reid should have really had a second himself soon after – as he skied one over the bar with an open goal at his mercy, before Crook did well to save at his feet moments later. Dale then struck the bar after a lovely run at goal as the final whistle approached.

However, Spartans were able to see out the rest of a pulsating period of extra time, to set up a repeat of last year’s Techflow Senior Cup final against North Shields.

Blyth Spartans will hope that those extra minutes don’t harm their chances of making it 11 league wins in a row, when they welcome a resurgent Corby Town to Croft Park on Saturday afternoon.