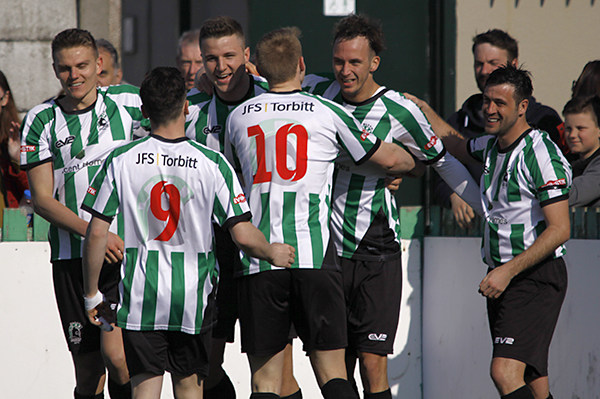 The hosts were 2-0 up after just three minutes, thanks to goals from Luke Armstrong and Daniel Maguire. David McTiernan then volleyed in a goal of the season contender against his former club on 13 minutes, with Armstrong grabbing a second three minutes before half-time to send Spartans in 4-0 up.

Dale Hopson scored a consolation for Whitby on 81 minutes, but Matty Pattison restored the home side’s four-goal advantage four minutes later – as the league champions put themselves just two points away from breaking through the 100 points mark.

Whitby needed to start in positive fashion with their chances of a playoff place dwindling, but it was Spartans that burst out of the traps and went ahead inside 54 seconds.

An exciting Blyth breakaway saw Jarrett Rivers bearing down on goal, but he lost possession in the Whitby area and the chance looked to have gone. Armstrong battled well to win the ball back though and cut back inside, before firing past Shane Bland via deflection.

The vocal Spartans supporters were celebrating once again just two minutes later – as the home side went further ahead.

Rivers put a ball in from the right and it looked to be an embarrassing miss for Maguire, as he managed to clip the bar from an open net. However, ‘Nipa’ had that much time and space, he waited for the ball to drop back down to him and put it in at the second time of asking.

Maguire could have had another on 11 minutes, when he was played in well by Armstrong. The striker scuffed his shot, but Bland was still forced into a diving save to palm it away to safety.

The same couldn’t be said two minutes later, when an unlucky 13 minutes for Whitby was compounded when a familiar figure came back to haunt them.

Robert Dale’s cross from the left evaded everyone, before Rivers put it back in and forced Bland to punch it clear. The ball travelled only as far as McTiernan, who gleefully cashed in on his former teammate’s generosity and volleyed home a priceless strike that money just can’t buy.

Spartans’ chances dried up a bit after their frantic start, but they then had three good chances in five minutes around the half-hour mark.

Maguire fired just wide across Bland on 28 minutes, before Ryan Hutchinson’s cross was blocked across the goal by Anthony Bell and just evades the far post. Rivers then managed the same trick as ‘Hutchy’ five minutes later, but his low cross bobbled behind off a Whitby body when it could have just as easily rolled into the back of Bland’s net.

Whitby were the architects of their own downfall with three minutes of the half to go though – after Armstrong took full advantage of a horror touch from Lee Bullock at the back.

With Armstrong bursting in at goal, Bullock appeared to give up on trying to atone for his error. The 20-year-old was left to finish well past Bland, whose hand on the ball wasn’t enough to keep it out.

Whitby had struggled for the whole of the first half, but were offered a slight glimmer of hope in the 45th minute – as Nathan Buddle conceded a free kick just outside the area. Dale Hopson stepped up to try and drag his side back into the contest, but the Evo-Stik League Supporters’ Player of the Season winner put the ball straight down Paul Woolston’s throat.

Town came out for the second half looking to at least make the scoreline a little bit more respectable, but failed to carve out a real chance in the first 15 minutes after the restart. Meanwhile, Spartans were restricted to just a Dale free kick that was held well by Bland.

With 61 minutes on the clock, Rivers jinked past Bell and drilled a ball into the near post. Not content with his unbelievable volley in the first half, McTiernan attempted what looked to be a majestic backheel volley ahead of his marker, but it went just wide.

The game turned into a much scrappier affair after that, which wasn’t help by the regular sound of referee S Dial’s whistle for niggling fouls.

However, Spartans’ frustrations nearly subsided when Dale drilled a free kick at goal from 35 yards on 69 minutes. Finding a way past the wall, the ball seemed destined for the back of the net until Bland got across well to punch the ball away with a fine diving save.

Substitute Jordan Laidler was next to force Bland into a save from a set-piece with 15 minutes to go – as the Whitby stopper tipped his free kick over the bar. Buddle’s header from the resulting corner was then cleared off the line with what appeared to be a hint of handball, but Dial showed no interest in Spartans’ penalty shouts.

Dial played a great advantage for a foul on Armstrong on 79 minutes, which Matty Pattison – who had replaced Dale just moments earlier – capitalised fully to release Maguire. ‘Nipa’ looked certain to score his second, but the keeper saved well down at his feet.

Whitby had waited 81 minutes, but they finally had something to cheer about when Hopson picked up a great cross at the back post. The midfielder managed to chip Woolston on his line and put the ball in off the opposite upright, despite Hutchinson’s efforts to try and clear.

Things could have got even better for the visitors just three minutes later, when Michael Roberts beat the offside trap and lifted the ball over Woolston. Opting to try the spectacular with an overhead kick into an open net as the ball dropped, the substitute blazed it wide to ironic cheers around Croft Park.

The away dugout had their heads in their hands once again on 85 minutes, when Rivers drilled in his fourth assist of the afternoon.

Maguire went past two and gave the ball to the winger, who picked out the run of Pattison at the near post. The substitute got the necessary touch to send it over the line and wrap up another fantastic win for Blyth this season.

Spartans will look to enjoy home comforts once again on Saturday, when they will be presented with the Evo-Stik Premier League title after the visit of Grantham Town.