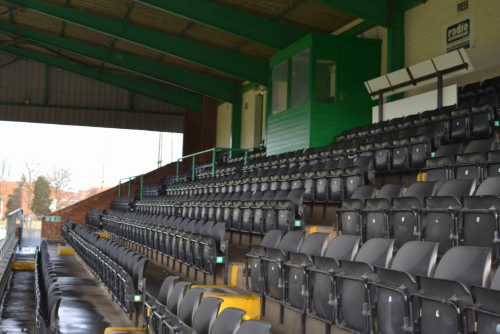 Spartans nearly completed a famous comeback with a late flurry in this entertaining Buildbase FA Trophy replay, but three first half goals for Altrincham gave Blyth too much to do in a 3-2 defeat.

A well-taken brace from Sean Miller put the visitors on their way, before a great team goal a minute before the break saw Craig Hobson give Alty a resounding lead.

Luke Armstrong then put Blyth back in with a shout on the hour mark and a late individual bit of brilliance from Robert Dale gave Spartans hope of extra time, but a last-gasp save from Tim Deasy ensured the Vanarama National League North side held on to win.

The home side welcomed captain Dale and Stephen Turnbull back into the starting line-up, while Richard Pell started in place of Ryan Hutchinson – after the knock he picked up on Tuesday saw him settle for just a place on the bench. David Atkinson’s unavailability for this round saw also Chris Bell slot in at right-back.

Armstrong has scored some fortunate goals this season by being in the right place at the right time, but he wasn’t able to profit from a slice of luck on four minutes. Michael Liddle’s cross just evaded Dale’s head and fell into the path of the youngster, but Armstrong didn’t know too much of it when the ball bounced off him and into the hands of a grateful Tim Deasy.

The home side were then left cursing their luck further just two minutes later – as their higher league opponents took the lead.

Shaun Densmore’s through ball evaded Nathan Buddle and Miller was able to race on to it at the edge of the area. Adam McHugh advanced to narrow the angle, but the Robins’ forward showed great composure to lift the ball over him and drop it behind the line from 22 yards.

Liddle played in Dale down the left with a fantastic ball back just after the 15-minute mark and the winger danced into the box, but no one was able to get on the end of his drilled ball across goal.

Tuesday’s man of the match Jarrett Rivers had caused Alty sorts of problems in the original tie and looked to do so once more, when he took the ball down well on the right and ran at goal. The winger got into the box despite being under pressure, but he lost his footing just before he could have a crack at goal.

Miller’s opener was top draw and he nearly produced another fantastic finish on 22 minutes, when he picked the ball up 18 yards out. He tried to curl one in around McHugh, but the keeper was able to parry it away with a diving save.

Blyth continued to toil away trying to get themselves back into the tie and they had a golden opportunity three minutes after the half-hour, when Dale won the ball well 20 yards out. He played in Armstrong in the area, but the youngster’s first time shot was blocked behind by Jake Moult.

Dale then went close himself with a cross/shot that was just wide, but Altrincham weathered the storm and extended their lead with four minutes of the first half to go. That man Miller made no mistake from the edge of the area, to double up with another impressive strike.

Things then got even worse for the home side, when the Robins scored their third just before the break.

An outstanding team move saw James Lawrie play a cross into the box, which appeared to be heading straight for Damien Reeves. The substitute had other ideas though and played a clever dummy at the front post, which left Hobson with the simple task of tapping the ball in.

It would be fair to assume that Alun Armstrong was not happy with what he had seen from his players – as the home side were out well before the start of the second 45.

With the words of the Spartans’ boss still ringing in their ears, Armstrong jnr won a free-kick on the edge of the Altrincham area just three minutes later. Dale stepped up to fire a rocket under the wall, but Deasy got down well to hold the ball in the centre of his goal.

Altrincham thought they had further extended their lead with 56 minutes gone, when Hobson rose to meet a cross at the far post. The striker nodded in across McHugh, but the assistant’s flag was raised for offside.

The home side took heart from that decision and their spirits were further lifted when they pegged one back just after the hour. Rivers played the ball to Armstrong, who took a couple of touches before firing an unstoppable effort across Deasy and inside the far post.

And things could have been even better for Blyth just three minutes later, when Dale picked out Reid at the front post. The forward chested the ball and shot on the volley while falling, but his strike was straight at a thankful Deasy.

Pattison – who had only been on the pitch for four minutes, after replacing Matthew Wade – played a great ball across goal, but none of his teammates were able to get onto the end of it. Turnbull played the ball back in from the left, looking for Armstrong at the near post, but Altrincham were saved by a hopeful hack away by Tom Hannigan.

Spartans threatened to at least finish with a flurry and they went close once again with 14 minutes to go, when Turnbull swung in a free-kick from the left. His ball picked out the head of Reid at the back post, but he headed down into the ground and Deasy was able to gather easily.

Rivers then tried to test Deasy as the game entered the final ten minutes, but a block from Hannigan took the sting out of his strike and presented the Alty stopper with no problems.

With four minutes to go, Spartans really should have been just one goal behind. Armstrong and Pattison attacked Turnbull’s cross at the near post and seemed certain to score between them, but the young striker’s effort ballooned up and over the bar.

That seemed to be all she wrote for Blyth’s Buildbase FA Trophy ambitions, but captain fantastic Dale had other ideas – as he danced his way into the Alty box from the right. Going past three defenders like they weren’t even there, Dale easily slotted the ball past Deasy for a superb solo goal.

The talismanic winger then looked to have added an assist to his name, as his cross towards the back post was powered towards goal by the head of Pell. However, the centre-back could only watch as Deasy tipped the ball over and – despite a succession of goalmouth scrambles from the resulting corner – extinguished Spartans’ hopes of a dramatic comeback in a pulsating finish to this Buildbase FA Trophy tie.

This result sees Blyth bow out of their final cup competition of this season, which means they have a full week to concentrate on their Evo-Stik Premier League clash against Barwell next Saturday.