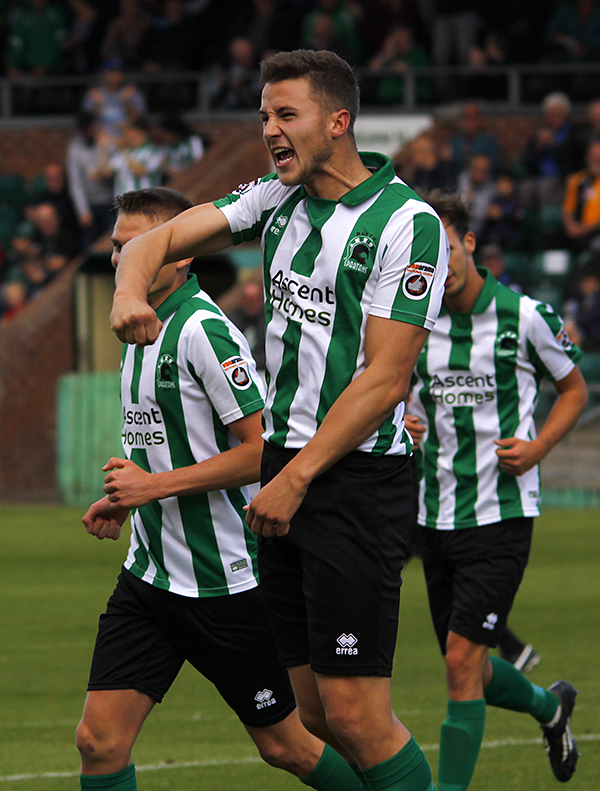 An excellent Blyth extended their winning run to four games at the expense of ten-men Chorley – as Spartans ran out 2-0 winners in an entertaining Vanarama National League North clash.

Nathan Buddle scored his second header in four days to open the scoring in an eventful 56th minute – as Stephen Jordan received a red card in the aftermath, when a handful of Magpies players surrounded referee Dean Hulme to contest the award of the free kick that the defender converted from.

The home side then finally made their man advantage count in the dying moments, when Daniel Maguire profited from lapse defending to score for the fourth consecutive game and wrap up another three points for Spartans.

Alun Armstrong named an unchanged side from that which comprehensively beat Boston United 5-2 at the weekend, for what was a clash of two of the in-form sides in the division – as both sides came into the contest having won each of their last three games.

Chorley’s Nicholas Haughton went on a dangerous run within the opening minute of the game, but dragged his shot at the edge of the area and Peter Jameson held comfortably in treacherous conditions.

An ugly late slide from Scott Leather on Robert Dale seconds later saw the Magpies centre-back come off worse – as he received a bust nose for his troubles that brought a halt to proceedings for seven minutes. Hulme stood and waited to show Leather a yellow card, to add insult to injury – as he was then replaced by Kieran Charnock.

Marcus Carver took advantage of the lapse in concentration when play restarted and found himself one-on-one with Jameson. The Spartans stopper got a touch on the ball to thwart the striker by sending him wide, before the follow-up cross was cleared away.

Jason Walker broke through himself on 17 minutes, looking to test Jameson more than his strike partner managed. However, the assistant’s flag was raised for offside to spare the keeper from being called into action again.

Spartans were straight down the other end seconds later, with Daniel Maguire getting in – after a nicely-worked one-two with Robert Dale. ‘Nipa’ ran through three in the Chorley box, but Matthew Urwin saved well with his body when the league’s joint top scorer tried his luck from a tight angle.

Sean Reid then tried one from long distance, which looked to cause Urwin more problems as he dived to his right. However, the keeper pulled his hand out of the way and watched the low fizzing drive sail wide of the far post.

Blyth began to increase the pressure on the Magpies’ backline and really should have taken the lead on 21 minutes, when more great play between Maguire and Dale saw the latter in at goal. The Blyth skipper curled one around Urwin to loud cheers from an expectant Croft Park contingent waiting for the ball to hit the back of the net, but they were left dismayed when the ball bounced back off the far post and away to safety.

Jarrett Rivers went one better than Dale 60 seconds later, but – after bursting through and passing the ball into the back of the net – he looked across to see that the assistant on the far side had his flag raised for offside.

A back-and-forth contest continued, but it was Blyth again that fashioned back-to-back chances three minutes after the half-hour mark.

Dale Hopson struck from outside the area, but Urwin punched his stinging strike away. The ball came back in moments later and Reid was denied by an outstanding point-blank save from the keeper, before his rebound effort was blocked behind for a corner.

With 43 minutes on the clock, it was nearly Groundhog Day for Buddle – after he scored a bullet header from Rivers’ corner against Boston on Saturday. He rose up to meet the cross again, but a Chorley defender on the line nodded the ball away to keep the scores level at the break.

The second half started off as a bit of a damp squib, but burst into life on 56 minutes – as Chorley contested the award of a free kick just right of centre 20 yards out, which lead to Spartans opening the scoring.

Dale whipped in a lovely ball towards the back post, where Buddle met it with a low diving header that gave Urwin no chance. Things got worse for the Magpies while Blyth celebrated – as Jordan received his marching orders for what was presumably dissent towards referee Hulme, following a number of Chorley players surrounding him on the way back for the restart.

The hosts could have doubled their lead just two minutes later, when Rivers showed great feet and then picked out Maguire in the area. ‘Nipa’ looked destined to score with a shot on the turn, but a magnificent save from an impressive Urwin saw the Chorley keeper knock the ball onto the post and keep his side in it.

As the game approached the hour mark, Maguire tried again to score his seventh goal in four games. He opted to hit one from 18 yards, but the ball just failed to find its target.

Chorley were up in arms once again when they won a free kick right on the edge of the Blyth box – as they were adamant that the foul had taken place inside the area and were appealing for a penalty. Walker stepped up and hit his shot straight into the wall, before shouting optimistically for handball to cover up for his wasted delivery.

Magpies were left feeling even more sick with six minutes to go – as Adam Blakeman fluffed his touch on halfway from Buddle’s hopeful ball forward and Maguire took full advantage. The prolific striker left the Chorley defence for dead, before calmly slotting the ball past Urwin to ensure Spartans’ winning run continued.

Blyth will hope to transfer their outstanding league form into their first cup clash of the season, when they face Evo-Stik Premier League side Shaw Lane AFC in the Emirates FA Cup second qualifying round at Croft Park on Saturday afternoon.