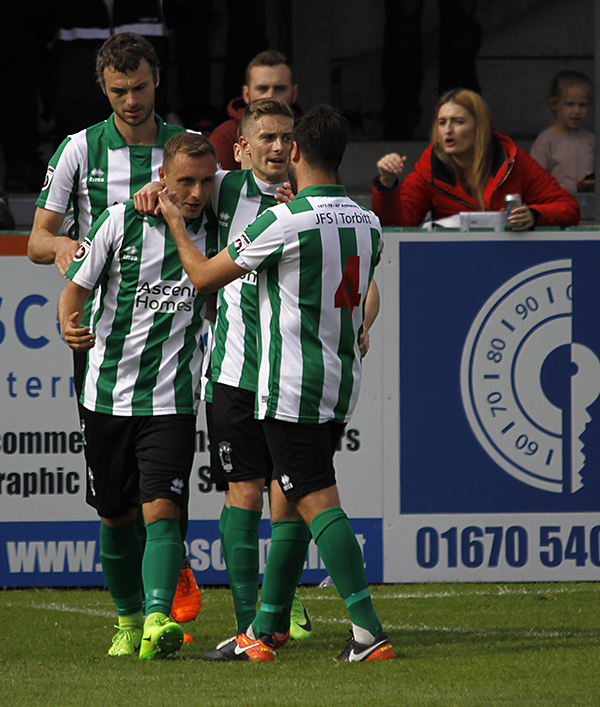 Blyth Spartans were beaten 2-0 by Vanarama National League North leaders Harrogate Town, in a bad-tempered clash that saw no less than 11 yellow cards and a straight red.

Terry Kennedy put the visitors ahead from a corner on 41 minutes, after reacting quickest to Michael Liddle’s off-the-line clearance from a corner to stab home.

In an incident that typified the ugliness of the afternoon, Harrogate substitute Jack Vann was sent off for an awful challenge that saw him slide in hard with studs showing on David McTiernan with ten minutes to go.

Spartans looked to make best use of their advantage against ten-man Town, but were caught out in stoppage time. Liddle’s failure to deal with a clearance led to Josh Falkingham – who could easily have received a second yellow more than once – wrapping up all three points for the visitors.

Following Jordan Watson’s devastating knee injury during Saturday’s 3-0 win at Curzon Ashton, Alun Armstrong was forced into one change for the visit of Harrogate. Lewis Horner came in at right-back, with Ryan Hutchinson filling the void left in the middle alongside Nathan Buddle.

Town looked to make their full-time status show in the opening minute of the game, following a sweeping attacking move towards the edge of the Blyth box. George Thomson tried to break through, but his heavy touch allowed Peter Jameson to come and gather.

The home side’s first chance of the afternoon followed two minutes later, when Horner’s cross was cleared only as far as Robert Dale. The Spartans skipper tried to place one, but Town goalkeeper James Belshaw collected the shot at head high.

A typical jinking run from Jarrett Rivers allowed the winger into the visitors’ area 60 seconds later, but his low drive was blocked away by a Harrogate leg in the six-yard box.

The hosts put together a lovely offensive manoeuvre to match Harrogate’s early opening on six minutes, when Horner, Dale Hopson and Daniel Maguire combined to let the latter cross into the area from the right. Horner looked to get on the end of the floated ball, but Warren Burrell was there to thwart the makeshift full-back in the nick of time.

An eventful first eight minutes continued when Spartans won a free kick in a dangerous area. Hopson stepped up to test Belshaw, but his shot went straight down the keeper’s throat.

A flurry of corners then followed for Armstrong’s side in the five minutes after that chance, but nothing of note was created through them.

After riding the storm out, Harrogate tried again to breach the Blyth backline when Jordan Thewlis struck from 10 yards. His shot was blocked out as far as Thomson, but he could only scuff a shot straight at Jameson from outside the box.

A goalmouth scramble saw both Rivers and Maguire unable to find the net, before the ball was picked up by Horner at the edge of the area. The former Inverness Caledonian Thistle man try to curl one inside the far post, but Belshaw saved well to his right.

Spartans were then left incensed on 25 minutes, when Maguire went to ground in the area after a coming together with Burrell in the box. Referee L Doughty ruled out a penalty in Blyth’s favour, despite a very vocal shout from the majority of the 829-strong Croft Park crowd.

The game descended into a scrappy ill-tempered affair around the half-hour mark, which saw five yellow cards shown within just 12 minutes – as both sides threatened to lose their cool.

A game of football soon broke out again with six minutes left of the first half, when Hopson’s free kick found Dale at the back post. His cross was headed towards goal by Hutchinson at the near stick, but the ball just cleared the crossbar.

A corner up the other end followed for Harrogate two minutes later, but they were able to make much more of their opening – as the away side took the lead just before the break. The set-piece had to be hacked away by Michael Liddle on the line, but Kennedy was there to stab home the rebound.

There was still time for Blyth to fashion two more chances before half-time, when Rivers cut the ball back to Maguire on the by-line. ‘Nipa’ shot from just a few yards out, but goalscorer Kennedy dived in to block the ball behind.

From the resulting corner, Hutchinson headed the ball back across goal at the far post. Sean Reid was picked out perfectly from the defender’s nod, but he volleyed over when in space on the six-yard line.

Harrogate looked to draw more blood at the start of the second half, but Thomson’s shot was deflected safely into the arms of Jameson.

Spartans had to wait until the hour mark to really test the Town defence. Dale smashed a hard shot towards goal, but Reid was helpless to get out of the way and blocked his team mate’s shot away from danger.

Anything Dale could do, Thomson fancied his chances of bettering moments later. The Harrogate midfielder hit a rasping shot across Jameson, but the ball cannoned back out off the upright.

Falkingham was walking a tight-rope – having already been one of the players booked in the first half – and a foul on the edge of the away side’s box on 63 minutes seemed to see him destined to finish the game early. However, referee Doughty gave him a talking to instead.

Hopson’s resulting free kick was nodded behind, before Buddle headed Rivers’ corner over the bar.

A cynical foul by Falkingham two minutes later then heralded cries of “Off” from the baying Blyth fans, but Doughty surprised them all by giving the Harrogate midfielder one final warning and told him no more.

Rivers twice ghosted down the right wing on 68 minutes, but his first cross was hacked away by a blue foot at the near post and his follow-up was headed behind by Kennedy with Reid waiting to turn it home.

Blyth seemed to be huffing and puffing, but to no avail – as Harrogate remained strong at the back. That was until a rush of blood with ten minutes to go seemed to give Spartans hope.

With the ball harmlessly bobbling about on halfway, McTiernan beat Vann to the ball. However, the substitute went in hard with studs up and caught the former Harrogate midfielder with an awful challenge – as Doughty was left with no option but to show him a straight red card and reduce the away side to ten men.

Spartans looked to make the man advantage count, but chances still appeared to be hard to come by. Maguire had a shot from the edge of the area with six minutes to go, but it was deflected behind for a corner.

With the game entering the final minute, substitute Macauley Langstaff was found with a beautiful ball from the right. The on-loan striker rose to loop a header towards the top corner, but Belshaw raced across well to keep his clean sheet intact.

Spartans were pushing plenty of men forward to try and force an equaliser, but ultimately – they were caught short at the back in second half stoppage time – after Liddle failed to deal with a clearance and was caught out by Falkingham on halfway.

Falkingham – who might have felt lucky to still be on the pitch following his earlier misdemeanours – raced clear of the left-back and slotted home between the legs of Jameson to seal all three points for the league leaders.

Spartans will hope to avenge this reverse when they travel to AFC Telford United on Saturday (3pm kick off.)