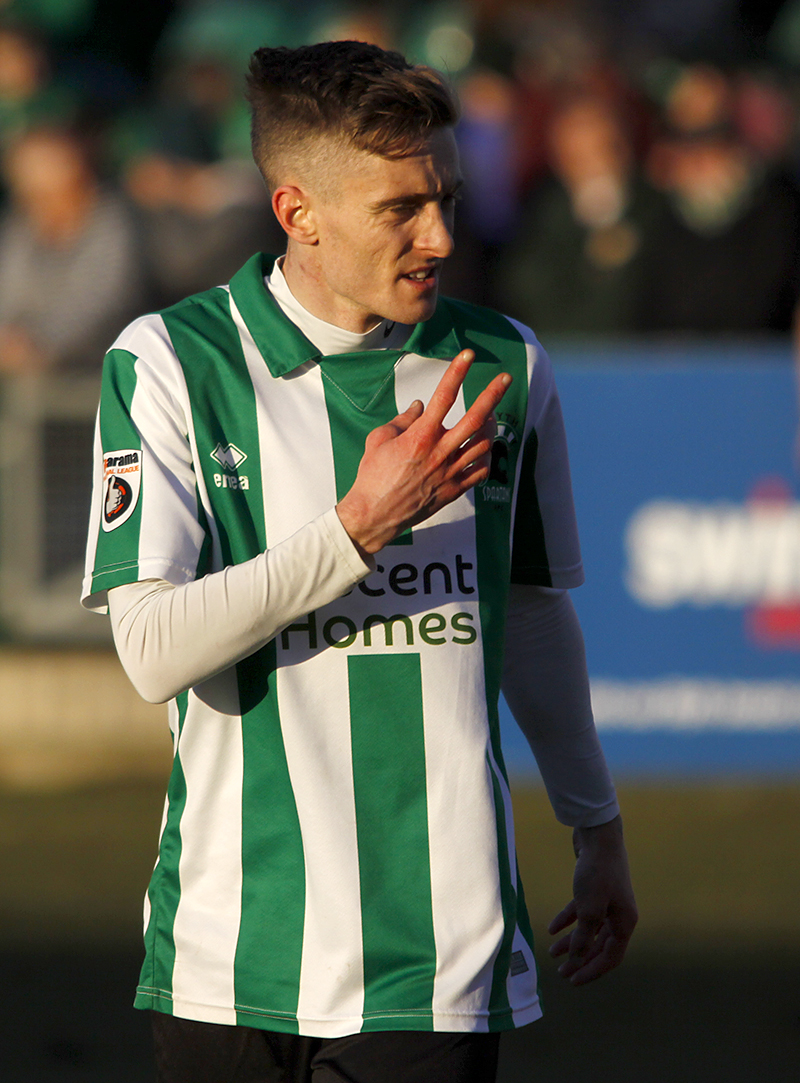 A battling Blyth Spartans were helpless to stop their losing run being extended to seven games on Tuesday night – as ugly scenes at full-time showed the home side’s frustrations in their 1-0 Vanarama National League North defeat to AFC Telford United.

Having already seen off the visitors in both the league and FA Trophy this season, the hosts were denied a much-needed hat-trick of wins over Telford – as Marcus Dinanga’s trickling shot on 28 minutes was all that separated the two sides.

A spirited Spartans huffed and puffed to pull level after two outstanding second half saves from Peter Jameson kept Blyth in the game, but a late flurry of chances didn’t prove fruitful – as Telford held on to inflict a seventh straight defeat on the hosts.

Alun Armstrong elected to make two changes from the side that started Saturday’s 2-0 loss at fellow play-off chasers Chorley for the visit of Telford. Ian Watson made way for Andrew Cartwright on the right – with Michael Liddle switching over to the left – and Dale Hopson returned to the starting XI in place of Jordan Laidler.

Spartans started their first of four games in a week and they must have had that in the back of their minds in the opening quarter of an hour – as they looked more prepared for a marathon than a sprint and United looked to take advantage in the early going, but with no end result.

Two lapses in concentration inside three minutes from Damen Mullen nearly played in the visitors, but Jameson  and then Nathan Buddle bailed out their team-mate to thwart the danger.

A Ryan Giles corner on 13 minutes was flicked across goal at the front post, but the ball ran out harmlessly for a goal kick.

The home side had to wait until the 15-minute mark to register their first real attack of the game, when Connor Johnson saw yellow for a cynical pull-back on Adam Wrightson on the right-wing – after the diminutive winger looked to have got past his marker.

Hopson stepped up to float a cross in to the back post. Ben Wilson spilled the cross when coming to claim, but Spartans were adjudged to have fouled the keeper and referee Adam Herczeg blew for a free kick.

Five minutes later, Kane Richards did well down the right to loop a ball into Giles, who leapt well to meet it. However, the hosts did well to clear it behind for just a corner.

Spartans thought they’d gone ahead on 26 minutes, when Wrightson converted from a glorious through-ball from captain Robert Dale. Assistant Mark Ryan soon raised his flag though, to chalk off the effort for offside.

Dale and Wrightson combined again 60 seconds later, which allowed the latter to get in down the left. The tricky former Gateshead man shot/crossed with the outside of his foot across goal, but a desperate Sean Reid was unable to get a goalbound touch on it to turn it in.

Blyth were made to rue those missed opportunities moments later – as Telford took the lead with a disappointing goal for the home side to concede.

Dinanga – on loan from Championship side Burton Albion – got himself into space in the area after flicking the ball over Buddle’s head to turn his man. Telford’s top scorer this season followed that great piece of play up by mis-hitting his shot, but wouldn’t have cared at all – as the ball trickled in low past Jameson.

Blyth looked for an instant response on the half-hour mark, when Mullen looked to get in on the end of a dangerous ball in. Herczeg blowed for a foul on Wilson, with the visiting keeper going down in instalments; much to the frustration of the Croft Park faithful.

Wrightson then tried to release Hopson through the middle six minutes later, but his pass was overhit – allowing Wilson to let it roll out of play.

The visitors were nearly 2-0 up with time running out in the first half, when Buddle was caught in two minds in the air and then a poor clearance from Rivers landed right in the path of Henry Cowans. The central midfielder blasted a rocket from 20 yards out, but it fizzed just wide of the far post.

Rivers then responded a minute later with a rasping shot of his own from the right, but the ball just cleared the crossbar – as Spartans went into the break looking at seventh straight defeat.

Armstrong sent his side out early for the second half after what was most likely a stern team talk at the break. They responded with a piece of promising play two minutes after the restart, but any danger was gone when Cartwright chipped a cross straight down Wilson’s throat.

The Telford stopper gratefully claimed Rivers’ corner four minutes later and turned it straight into a inviting United breakaway. Goalkeeping counterpart Jameson advanced deep out of his area to beat Giles to the loose ball and clear his lines.

United went close once more three minutes before hour, when Elliot Newby – who’d replaced Giles moments earlier – crossed in to Richards at the far post. David Atkinson was able to get a decisive touch on the ball to flick it behind though.

Telford threw away a huge chance on 62 minutes, when they broke through Blyth’s back-line with a three-on-one. Newby was rolled the ball inside the area and looked to stroke the ball past Jameson, but the Spartans stopper produced a fantastic stop with his foot to keep his side in the contest.

Rivers chipped in a short corner to Cartwright three minutes later and the right-back looked to volley it at goal, but got his attempt all wrong.

Liddle was caught out in no-man’s land seconds later and Armstrong’s side had their goalkeeper to thank once more – after Richards took full advantage and raced towards goal. Jameson spread himself well though – as he thwarted Telford once again with a superb save and all but claim Spartans’ man of the match award for the game.

Daniel Maguire then made his introduction seconds later – on for Hopson – and looked to give Blyth the cutting edge they’d lacked so far in the contest.

Mullen shot from distance with 22 minutes to go, but it was comfortable for Wilson to get down and hold.

A 74th minute incisive Blyth breakaway down the left nearly gifted the home side a deserved equaliser, when Liddle’s cross was left by everyone bar a lurking Dale at the edge of the area. The talismanic captain curled an out-swinging rocket towards the right upright, but the ball went agonisingly wide of the post.

Wrightson beat Johnson once more two minutes later and crossed in from the left. Reid met it at the front post, but was unable to keep his header on target.

One last throw of the dice saw Laidler come on for Cartwright with nine minutes remaining, but the time-wasting theatrics of Wilson looked to disrupt any chance of a Spartans equaliser.

Reid was picked out with two minutes left of the 90, but he flashed his seven-yard header across goal when he really should have done better.

Deep into stoppage time, Maguire carved out a chance for himself to put Blyth level. However, “Nipa” uncharacteristically ballooned his shot high and wide.

With yet another reverse, Blyth go into Thursday’s Vanarama National League clash with Southport desperate to end their seven-game losing record (7:45pm kick-off.)