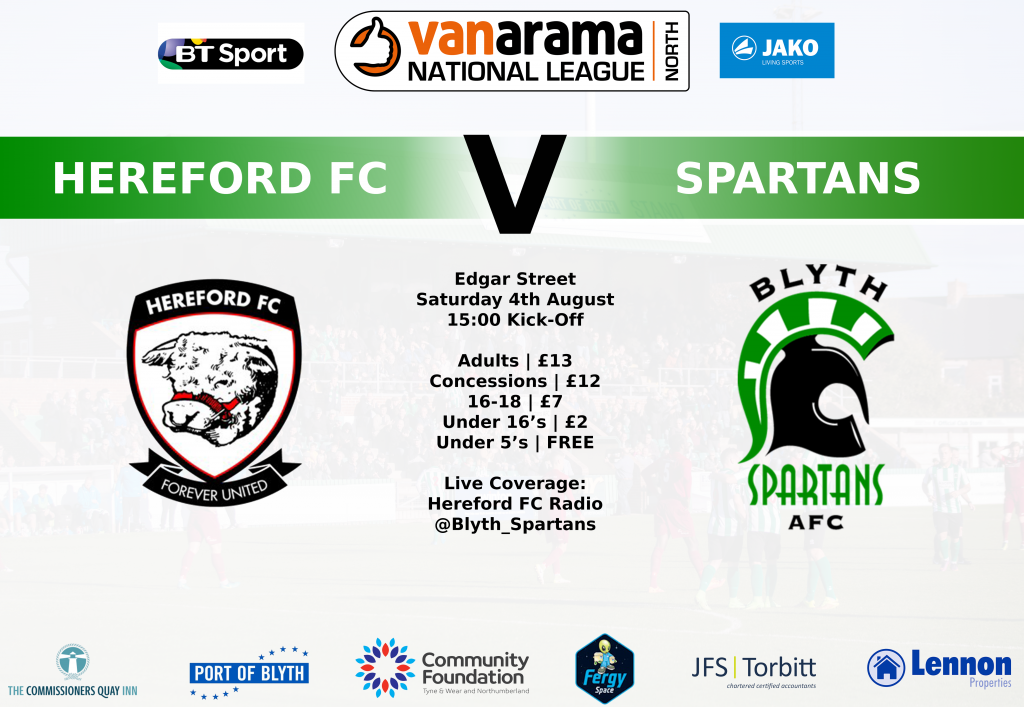 We make our longest league away trip of the season as we travel to newly promoted Hereford FC in the Vanarama National League North.

This will be the earliest ever start to a league season for Spartans – the 5th August during the 2009/10 season the previous record holder.*

This begins our second campaign back at Step 2 as Alun Armstrong and his side look to improve on last season’s tenth place finish.

Hereford FC were founded in December 2014 as the phoenix club of Hereford United – inheriting their Edgar Street ground during the process.

They entered the league pyramid in 2015/16 and have gone on to have unrivalled success as they’ve progressed through the divisions to reach the National League North.

During the 2015/16 they completed a famous treble – winning the Midland Football League, League Cup and Herefordshire County Cup in a phenomenal first season.

The only blemish on their record was a 4-1 defeat to fellow Northumberland side Morpeth Town in the FA Vase final at Wembley Stadium.

The made it back to back league championships in 2016/17 – winning the Southern Football League South & West Division One, before winning the Premier Division a year later last campaign.

In 130 league games, Hereford have won an astonishing 104 games, losing just 10 – and will no doubt be looking to contend at the top of the league table this year.

Manager Peter Beadle was in caretaker charge of Hereford United before being wound up in December 2014, and has been the ever present gaffer for the phoenix club.

A striker by trade during his playing days, he spent time on the books of Tottenham Hotspur, Bristol Rovers and Bristol City to name a few, playing as high as the then First Division.

The 24-year-old started out as a member of the Coventry City Academy and had spells with a number of non-league clubs, as well as spending a year playing College Soccer in the USA, before settling into the Gloucester City first team in 2014.

The Birmingham-born forward went on to make over 30 appearances for The Tigers before being snapped up by the then League 1 side, Barnsley in 2015 for an undisclosed fee.

With the Hereford being a phoenix club, their are very few connections between the two side. Midfielder Damen Mullen came off the bench for Morpeth Town in their 4-1 win over Hereford at Wembley Stadium, while media manager Stuart Dick was in charge of the Highwaymen’s media during that Vase run.

Club Captain Robbie Dale is set to make his 600th club appearance for Blyth Spartans if he features against Hereford.

Midfielder Lewis Horner is set to make his 50th club appearance for Blyth Spartans if he features against Hereford.

There could be debuts for Sam Brotherton, Connor Oliver, Bradley Fewster. Jamie Holmes and Bradley Skirpan.