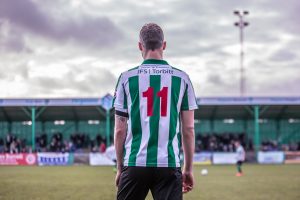 Blyth Spartans suffered a 3-0 defeat to Hereford in their National League North opener – the longest trip they will make this season.

Alun Armstrong’s men departed the North East at 7am Saturday morning in order to reach Edgar Street in time for kick-off, and perhaps in the first-half, they struggled to shrug off the long journey.

The Southern Premier League champions controlled the first-half proceedings, and grabbed a deserved lead on the half-hour mark when Harry White’s trickery on the edge of the D fooled the Blyth defence before he picked out the bottom corner.

And as Armstrong prepared for his half-time team talk, Mike McGrath popped with a goal in stoppage time when he directed Eliot Richards’ delivery past Pete Jameson.

Blyth improved in the second-half but could only test Bulls keeper Martin Horsell from corners and long distance – leaving the ever-dangerous Richards to wrap up the tie with 15 minutes to go.

Despite the loss, the game will be remembered in honour of Robbie Dale after the captain and club legend made his 600th Blyth appearance.

Sam Brotherton and Connor Oliver were drafted straight into Armstrong’s starting 11 after signing for the club on Friday alongside Kieran Green and Alex Nicholson, who also featured following their return to the club.

Neither side witnessed any action in the opening 10 minutes, but The Bulls began to dominate when Ryan Green headed onto the crossbar before White blasted over the rebound.

Seconds later, Blyth had barely any time to recover from their scare when Richards, a chief instigator throughout, sent Jennison Myrie-Williams one-on-one with Jameson, but the Blyth keeper came out on top.

The pair combined again on 27 minutes Myrie-Williams found Richards with his cross on 27 minutes, however the well-positioned Jameson pulled off another impressive save.

You felt Spartans were hanging on a little bit, and three minutes later, White put the newly promoted Bulls in front when his neat footwork created the space to power his shot into the corner.

Spartans often found themselves pegged back until half-time, although did manage to carve out their first shot on target in the 39th minut but the shot from 12-yards was comfortable for keeper Martin Horsell.

Hereford’s push for a second paid off when McGrath directed Richards’ cross past Jameson – a soft goal to concede for Spartans at one of the worse times.

It was evident that something needed to change going forward. Armstrong turned to Jamie Holmes in place of Sam Brotherton for, who had picked up a yellow card midway through the first period, for his debut. But with that meant the loss of Sean Reid at number 10, who dropped into centre-half to partner Nathan Buddle.

Spartans gradually improved as the half went on and held the better possession stats, though corners were their biggest threat with Buddle, twice (I think), heading over despite shoving off his marker.

Connor Oliver, on two occasions, tried his luck from distance in the final quarter of an hour but Blyth were condemned to defeat when Richards slotted home from inside the area on 75 minutes.

Holmes oversaw the visitors last chance in injury time when his free-kick brought a smart save from keeper Horsell. Next for Blyth, they welcome Bradford Park Avenue to Croft Park on Tuesday.