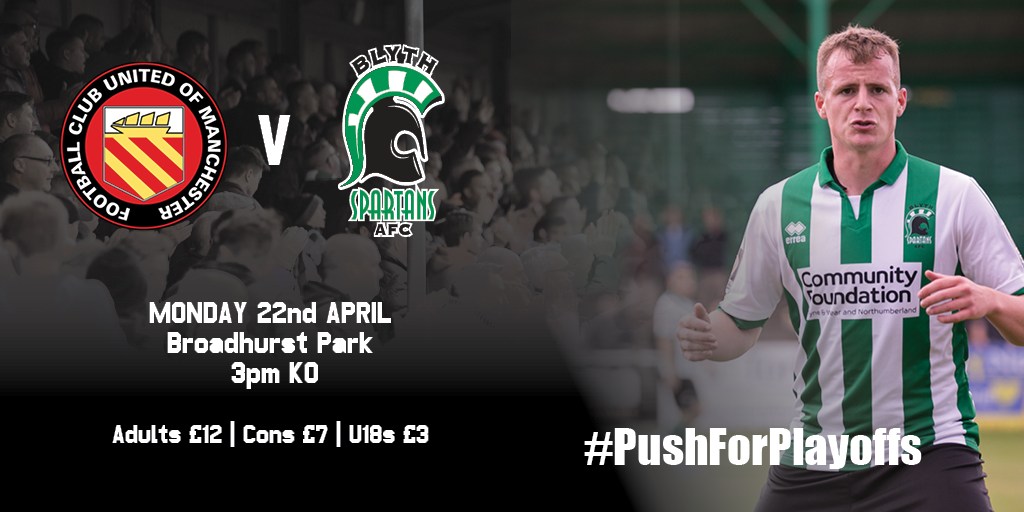 After victory over Guiseley on Good Friday, Spartans are now looking for their sixth straight win as they travel to Broadhurst Park on Easter Monday to face an FC United side with survival on the line.

The latest round of fixtures has seen Spartans cut Telford United’s advantage to just one point as they chase the remaining play off positions with two games left. Meanwhile FC United currently sit 20th in National League North, four points from safety, meaning defeat will see the home side relegated.

The reverse fixture at Croft Park was a miserable afternoon for the home side as FC United stunned Spartans with a 3-0 win.

FC United kept their faint survival hopes alive with victory in a thrilling 3-2 win away at Alfreton Town on Saturday. The win saw them leapfrog Ashton United into 20th place, four points from Guiseley in 19th.

The result was very much in keeping with FC United’s season where they have managed a respectable seven league wins on their travels. However, this has been undermined by their poor home form which has seen them only earn a solitary league win at Broadhurst Park this campaign.

Spartans have not enjoyed the best of fortunes against FC United, in the nine meetings between the sides Spartans have only won twice with one draw.

The last time Spartans made the trip to Broadhurst Park was in October 2017 where goals from Dan Maguire (twice) and Sean Reid secured a 3-1.

FC United boss Neil Reynolds joined the club in October 2018 from Bamber Bridge and has plenty non-league experience both as a player and a manager. Reynolds also combines his role as a manager with a full time job as a headmaster at South Shore Academy in Blackpool.

Despite FC United struggles this season, striker Kurt Willoughby is the league’s fifth highest scorer this season, with an impressive return of 18 goals.

Willoughby was on target in FC United’s victory over Spartans in November and also grabbed a goal on Saturday in their victory over Alfreton Town.

Striker Dan Maguire is just one goal away from making it 160 for Spartans. Maguire is currently third in the National League North goalscoring charts with 20, three goals away from Spennymoor Town’s Glen Taylor.

If he makes an appearance on Monday, Adam Wrightson will hit a century of games for Spartans.