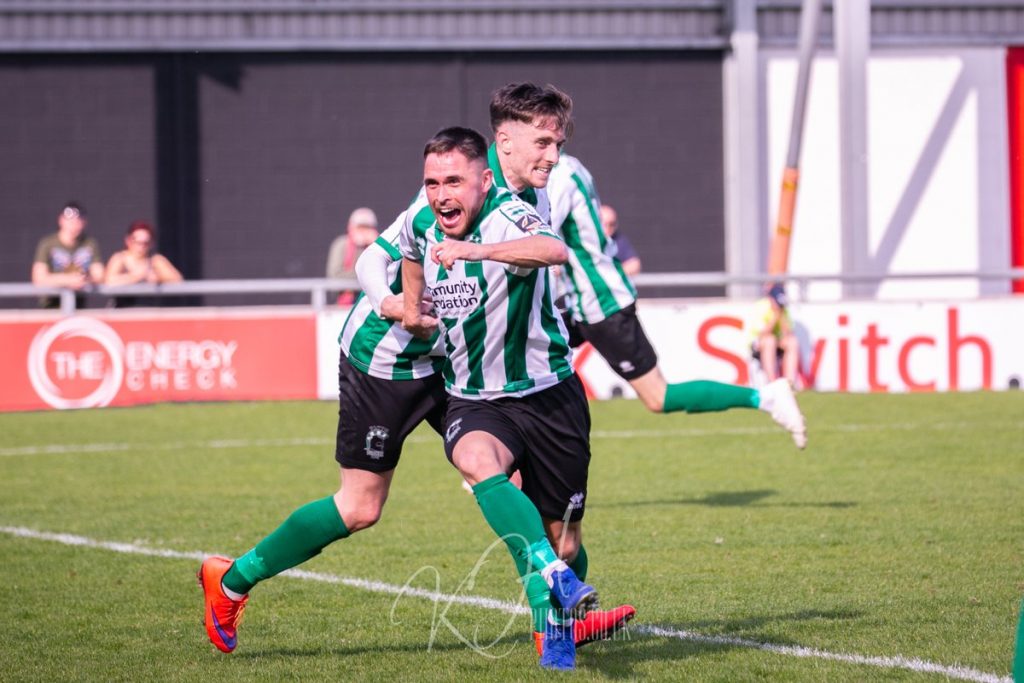 Adam Wrightson marked a century of Spartans appearances with a last gasp winner to sink FC United and take Spartans up to the play-off positions in a dramatic finale at Broadhurst Park.

Spartans got off to a fantastic start as Jarrett Rivers converted a Dan Maguire cross after 16 minutes as Blyth began to carve open their opponents.

However, Spartans’ profligacy looked to have been punished on 87 minutes as Jack Banister fired in a late equaliser with the aid of a deflection.

But three minutes later, up popped Wrightson who smashed home from six yards to seal a vital three points.

Boss Alun Armstrong kept faith with the same line-up that beat Guiseley on Good Friday as Spartans sought a sixth straight win to maintain their play-off push. For FC United only a victory – depending on results elsewhere – would be enough to stave of relegation for another week.

And it was an end-to-end opening to the game as both sides exchange speculative efforts, before Nathan Buddle had Spartans first clear chance with a towering header that forced Andrew Fisher into a fine reaction save.

Spartans’ pressure was rewarded five minutes later after a well worked move on the left hand side. Robbie Dale cut inside from the wing and slipped a reverse pass through to Maguire, who showed great footwork to make room for the cross and Rivers made no mistake from six yards.

FC United briefly rallied for an equaliser and on 27 minutes Tom Peers went close with a back post header, before Sam Baird volleyed wide from a corner three minutes later.

Spartans then retook control for the rest of the half and created numerous chances to get a vital second, the best of which were denied by Fisher. First, the keeper did well to prevent Dale from close range after he weaved his way through the home defence, and then he produced another fine reaction save to again deny Buddle.

The second half began in much the same vein, with Spartans creating three gilt-edged chances within 10 minutes. Dale, tormenting FC United on the left wing, first played in Rivers who saw his shot well saved by Fisher, the Spartans skipper then unleashed a venomous strike off the bar, before playing in Maguire who laid the ball across goal but no one could reach to put into the empty net.

FC United offered little in response, but almost got lucky as substitute Salou McDowell-Jallow’s cross from deep was spilled by Peter Jameson, only for the Blyth stopper to do well to stop the ball creeping into the goal.

Spartans again put the hosts under heavy pressure, and created another great chance on 70 minutes as Green stole the ball from Peers on the by-line, played across to Dale but he could only fire straight at Fisher. Then, 10 minutes later Jamie Holmes could have sealed the win but he fired over when inside the area.

It began to get nervy for Spartans and it looked like FC United delivered a hammer blow as they grabbed an equaliser just three minutes from time. A long ball upfield was well controlled by Kurt Willoughby who played in Banister whose shot looped off Jordan Watson and into the net.

The hosts then frantically searched for a winner but Spartans caught them on the break. As the clock hit 90, Dale released Holmes on the left-hand side, he bared down on goal and showed great composure to lay the ball across goal as Wrightson arrived at the back post to lash home as he celebrated his 100th Spartans appearance in style.

The goal deflated the home side and Spartans saw out the final moments with little drama, much to the relief of a sizeable away support. The victory sends Spartans up to sixth place in National League North, one point clear in the play off positions ahead of their final game of the season on Saturday as Southport visit Croft Park.