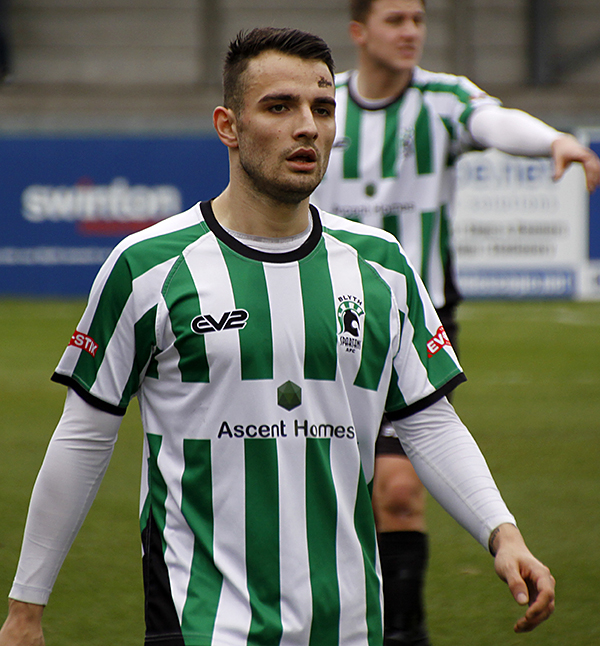 Right-back David Atkinson has decided to leave Blyth Spartans – after agreeing a deal to join Icelandic side IBV Vestmannaeyjar.

The ex-Middlesbrough trainee defender originally joined Spartans on loan from Carlisle United last December, before signing permanently when he left the League Two side by mutual consent a month later.

Although the latter part of his season was marred with injury, Blyth boss Alun Armstrong had seen enough to offer the 24-year-old a contract for this season’s Vanarama National League campaign.

However, following an interest from the Úrvalsdeild karla side – whose alumni includes former England goalkeeper David James and Alun Armstrong’s ex-Ipswich Town teammate Hermann Hreidarsson – Atkinson has opted to join IBV for the last two months of their season instead and help with their fight to avoid relegation out of Iceland’s top division.

Armstrong was obviously sad to see Atkinson leave the club, but insisted that Blyth would never stand in a player’s way if they had ambitions to play professional football.

The 42-year-old added: “I’m disappointed that he’s left, but he wanted full-time football and we won’t stand in the way of players that want to do that.

“We know Lewis Horner can play at right-back as well, so we’re still alright for players in that position – as we have ‘Carty’ [Andrew Cartwright] and ‘Hutchy’ (Ryan Hutchinson) as well. However, I’ll actively be looking for a replacement as well.”

The club would like to wish David the best of luck for the future and thank him for all of his efforts for Blyth Spartans.