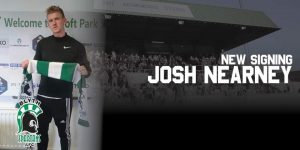 The 23-year-old began his career at Pools and went on to make one senior appearance in an EFL Trophy defeat to Sheffield United on penalties in 2015.

During his three years around the first-team set-up at the Super 6 Stadium, Nearney had loan spells at Darlington, Whitby Town and Whitley Bay – before joining the latter permanently in 2017.

After spending a season at Hillheads, Nearney returned to Whitby in August 2018 on an undisclosed fee, but mutually agreed to depart the Evo-Stik Premier outfit just three months later.

Nearney, after a brief third spell with Bay, spent the second half of last season at Northern League Division One side North Shields, who Spartans will visit in pre-season on Tuesday, July 9.

As a youth player, he sported the colours of Wallsend Boys Club and Middlesbrough. Nearney can play either as a right-back or a central defender.