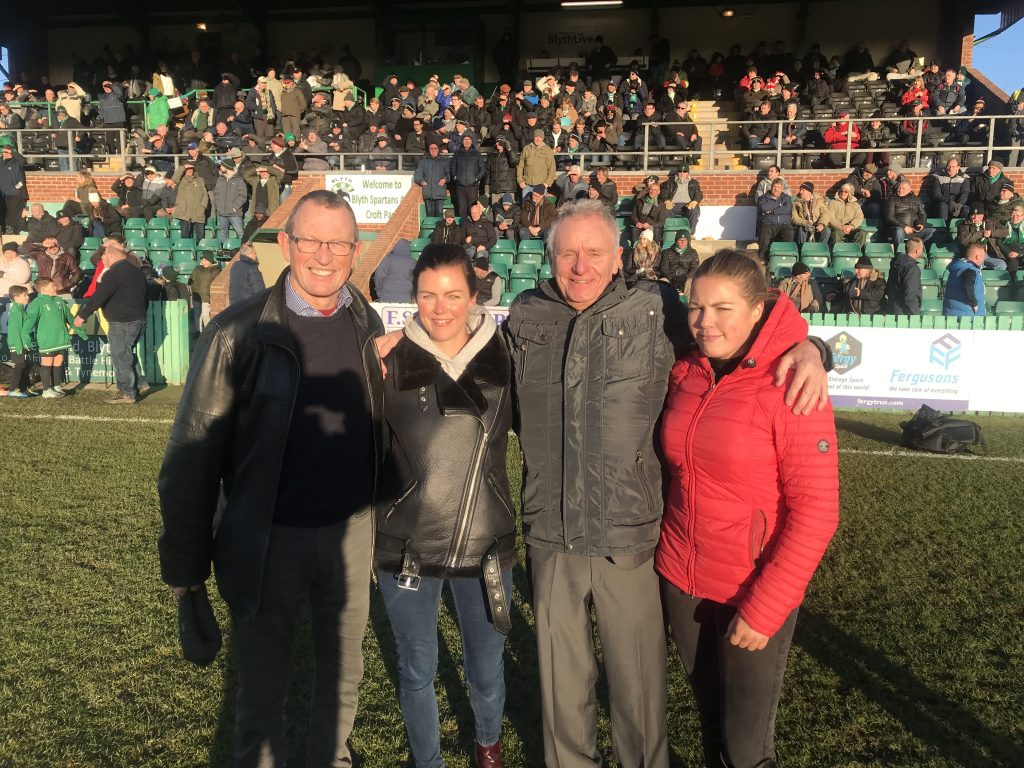 Before Saturday’s 1-1 draw with F.C. United of Manchester in the Vanarama National League North, we once again welcomed guests associated with the fantastic FA Cup run of the 1977/78 season when Spartans reached the Fifth Round proper of the competition.

John Waterson was 27 when he signed for Blyth from Whitley Bay by Spartans’ manager Allan O’Neill.

John said: “I met Blyth player Mick Dagless on a Middlesex Wanderers tour of Singapore and Malaysia in 1975 and became interested in moving to Croft Park.”

The stock controller had been at the Bay for three seasons and at Croft Park he quickly became acclaimed as the best right back in the region.

While at Hillheads he captained an FA XI which contained his future teammates at Blyth: North Shields’ Keith Houghton and Bishop Auckland’s Alan Shoulder. Two other names stood out in the side the team: World Cup winners Nobby Stiles & Bobby Charlton!

He was appointed captain by Spartans’ manager Brian Slane at the start of the 1977/78 season. John said: “All my job entailed was tossing the coin because we had so many experienced players. I’m not sure why Brian [Slane] made me captain; I must have been a good coin flipper!”

It was his challenge late on in the 5th round FA Cup tie at the Racecourse Ground Wrexham that was wrongly adjudged by referee Alf Grey to have given the home side a corner.

John commented: “After the game Wrexham’s Bobby Shinton said it was never a corner. The ball came off him. Of course we were disappointed but we didn’t complain like players do today about decisions. We would have had Arsenal but at least we had another big game – at St. James’ in the replay. That was a game and three quarters! It was a blur actually in front of that massive crowd. It seemed like the game was done and dusted in a micro-second.”

John was a virtual ever present at right back in his five years with the club but never managed to score a goal. In the summer of 1980 he left joined Gateshead, “I thought I was going to leave football after Blyth but a friend persuaded me to join Gateshead,” he said. John played two seasons in the NPL before moving to North Shields. In 1982/83 he was involved in another FA Cup run as the Robins reached the 2nd round before losing to Walsall.

Such is John’s long-lasting fame as captain of the historic 1977/78 side that in 2014 he was invited to officially re-open the town’s famous art deco cinema, The Wallaw as a Wetherspoons pub following its multi-million-pound conversion.

Rob joined Blyth in the summer of 1977 from North Shields.Interestingly he’d played very little football between the ages of 14 and 24.

Rob explained: “I more or less watched Newcastle during those years. I was playing for my works side when I was recommended to Jack Marks at Shields. Jack worked at the same place.”

Rob commented: “I was an attacking midfield player and certainly when I first joined Blyth I played high up the pitch.”

During the FA Cup run he scored goals at Shildon as well as the opening goal in 3-0 2nd qualifying round replay win over Crook Town.

“Bringing Jackie Marks to the club was a masterstroke by Brain Slane,” Rob said. “They brought in a whole batch of new players and it was incredible how the team gelled immediately. It was put together so quickly but the lads were winners and people just clicked. It was a unique time.”

Asked for his best memories Rob said: “I asked Jack Marks, after signing, if I could bring our Steven to Blyth. He was a fantastic footballer but was often in trouble with referees and in fact he was suspended for three months when he arrived so couldn’t actually play till nearly Christmas of 1977. Seeing him show his potential at Blyth was a highlight for me.

“I remember that Cup run steadily building up round by round. We had pre-match meals at a pub in Blyth; steak or mince on toast, that sort of thing. I’d never done that before. It was new to me! But Ron Guthrie took me under his wing. He’d seen it all before as a professional. Ron was fantastic with the younger lads in the squad.”

Rob found it harder to win a starting place in the side in 1978/79 after arrival of Peter Davies and left the Spartans in January 1979 and returned to North Shields before signing for Tow Law. Following a broken leg Rob retired in 1980.

It was in May 2013 that we sadly lost Steve Carney to cancer. Steve was known as a no nonsense player who worked hard for everything he achieved in the game. Former Blyth coach Jack Marks described Steve as “a team in himself”.

21-year-old Wallsend-born Steve signed for the Spartans, following his elder brother Rob, from North Shields at the beginning of the1977/78 season.

Following two years at Shields the brothers had caught the eye of Jack Marks. Steve could play in midfield or as a centre back.

Brother Rob commented; “It was fantastic for Stephen to play for a club like Blyth at such a young age. It was a bit of a shock for him as he hadn’t played for long at any real standard. I know he loved it.”

In November of 1977 Steve and Rob became the first brothers for many years to score in the same game for the Spartans. That season saw him score 16 goals in 63 games including the equalising goal in the Spartans 3-2 win at Stoke City in the FA Cup.

Manager at the time Brian Slane commented on Steve’s athleticism: “It frustrated coach Jack Marks that Steve only gave 75% effort in training. Jack would shout instructions but Steve would glower – he didn’t like training. But when it came to the game Steve never gave less than 100%. He was so fit I guess he felt he didn’t need to bust a gut in training.”

The season after the big cup run Steve made 35 appearances registering six goals.

His reputation saw Newcastle manager Bill McGarry sign him on. He made his debut for Newcastle alongside a fellow Spartan – Alan Shoulder, and Kevin Keegan. Steve was integral in United’s 1883/84 promotion season. He went on to play at Carlisle and Darlington before returning to Blyth in 1987 and retiring in 1991.