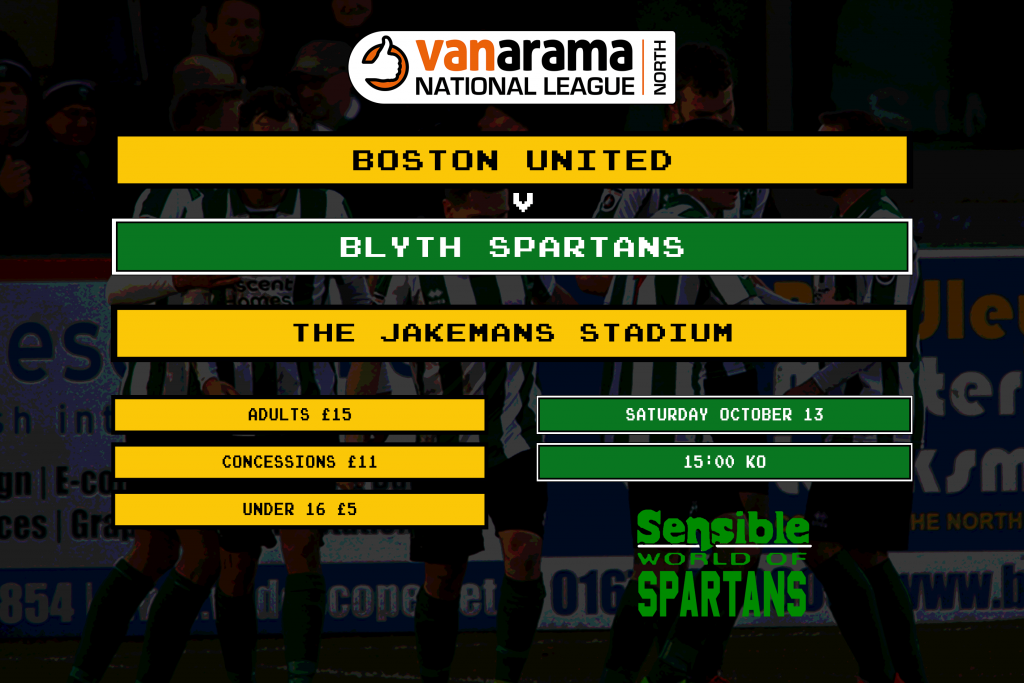 Spartans return to league action with a trip to Boston United this weekend after last Saturday’s FA Cup exploits against Gainsborough Trinity.

A strong start to the season saw Boston United win four of their first five games with wins over Guiseley, FC United of Manchester, Nuneaton Borough and Altrincham.

However, since then they have struggled to find form, picking up just two wins in six games, both away from home.

Boston have lost four in a row at home, including a shock FA Cup exit at the hands of Peterborough Sports, failing to score in all four home games and conceding eight.

In fact, the Pilgrims have only scored twice in their last eight appearances in all competitions.

Despite the poor run of form, Boston sit on 8 points – eighth in the Manarama National League North.

Spartans have had little joy against Boston United over the years, picking up just four victories in 17 attempts against the Pilgrims, all of those at Croft Park.

Blyth’s record at The Jakemans Stadium can be described as abhorrent, losing six and drawing three of the nine matches between the two sides.

Interestingly enough, five of the six defeats have been by the odd goal, with a 1984/85 FA Trophy game finishing 5-4 – Peter Cartwright, Ronan Liddane, David Buchanon and Tony McFadden on target.

Craig Elliott was appointed manager of Boston United in November 2017. Having guided Shaw Lane to three promotions in four seasons with the Barnsley-based club, Elliott stepped up to become Adam Murray’s permanent successor at The Jakemans Stadium. He had previously managed Glasshoughton Welfare and Ossett Town, having retired early from his playing days due to injury. Following four successive victories in December 2017, Elliott was awarded the Manarama National League North manager of the month award.

With 13 appearances, two goals and two player of the match performances, Brad Abbott has been a huge part of Boston United’s set up this season.

A central midfielder by trade, he scored both his goals for the season in his sides victory over FC United of Manchester, picking up the player of the match award in the process.

Brad Abbott joined the Pilgrims from Buxton for an undisclosed fee in December 2017. The former Barnsley trainee impressed for Martin McIntosh’s Evo-Stik Northern Premier Division side and became one of new manager Craig Elliott’s first signings at The Jakemans Stadium.

Michael Liddle returned to action alongside Damen Mullen and Bradley Skirpan in the Reserves mid-week Northern Alliance Division One fixture and will be in contention for the Boston game.

“Football’s not won or lost in the first 11 games, we had a lot of injuries through the first few weeks of the season but last Saturday was the first time we had a full squad, I had to leave a player our of the 18-man squad, I was shocked, it’s the first time I’ve had to make a decision like that.

“It’s going to be even tougher against Boston, but it’s what the squad needs, competition across the board, and the lads know that no place is guaranteed, places are up for grabs – if you’re not playing well someone will come and take your place, and that’s fantastic to see.

“The run of victories has given us a lot of confidence as opposed to earlier in the season. We had a tough start but we weren’t getting beat because the other team was better, it was silly mistakes that we were making that did for us.”