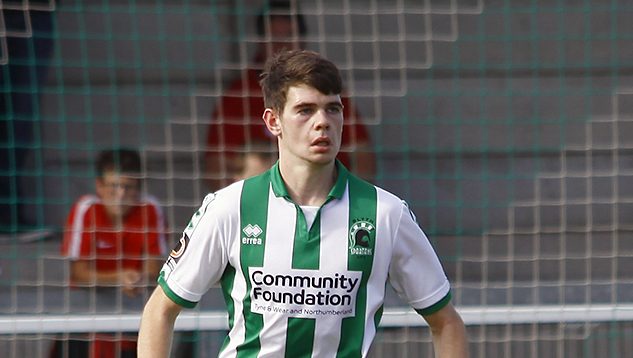 Defender Aaron Cunningham has returned to Hartlepool United after his loan spell with Blyth came to an end.

The 21-year old was signed at the start of the season when Blyth suffered a number of injuries at the centre-back position and immediately made a name for himself in a 1-1 draw with Darlington – picking up the man of the match award.

In total the centre back made 17 appearances for Spartans, netting goals against Guiseley and Spennymoor Town away from Croft Park.

Alun Armstrong paid tribute to the defender’s abilities: “He’s a proper defender, and I hope the lad gets a chance at Hartlepool as he’s proven he can play the men’s game.

“He has to believe in himself a lot more, but I’m sure he will do well and he’ll be someone I keep an eye on that’s a certainty.

“I’d like to thank Aaron for his efforts here, he’s showed us he potential he has.”

The defender himself lauded the fans, the management, the squad and his experience at Blyth.

“It’s been class,” said Cunningham, “I’d just like to thank everyone who has helped me out since I’ve been here, from the gaffa, to Daz, to everyone at the club.”

A full interview with Aaron will be in Saturday’s matchday programme.