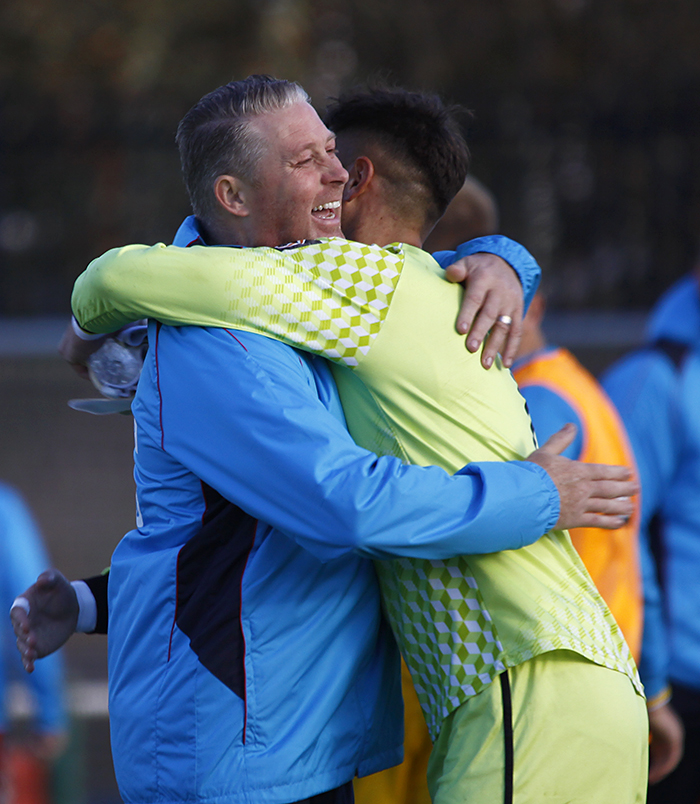 Alun Armstrong praised a “special” performance against Chorley on Saturday as his side made it seven wins in a row in all competitions.

The 43-year-old made changes to his usual attacking setup and matched up “man for man” against the league leaders.

“We had a good chat during the week, I have looked at how Chorley have got on against other teams and I just thought I will change it today, we decided to match them, go man for man.

“It worked in a way, they got frustrated in the first half and we capitalised.

It’s not our usual way of playing, but it did a job and we had a gameplan, we knew if we kept it close we had attacking options on the bench to go at them.

“That was special today.”

Armstrong employed a formation that didn’t utilise Spartans potent wingers, Jarrett Rivers and Jamie Holmes on the bench – Robert Dale and Adam Wrightson missing out through injury. And the former Middlesbrough striker admitted he had to overcome his own stubbornness to send his side out to play that way.

“I think I’ve shown a bit of stubborness at times as I want us to play attacking, free-flowing football. I’m always learning.

“I’ve had to take a step back and think, away from home against good sides like Chorley we have to change how we play.

“I knew how strong Chorley were, but thought if we can match them like Stockport did earlier this year we could do something in the last half an hour, our subs could cause chaos.

“That was the gameplan, although I’ll admit I didn’t expect us to score four, but give the lads credit, they threw their bodies on the line in defence today, maybe we lacked that earlier in the season.”

The introduction of Rivers and Holmes with just over 20 minutes remaining proved the difference, with the latter bagging a brace whilst the former channelled his inner Lionel Messi to create the fourth goal.

“Holmes and Rivers were the match winners,” insisted Armstrong

“But everyone performed today, and the workrate was excellent against a very good Chorley side.”

Despite the evident praise for his side, Armstrong was frustrated at the goals Spartans conceded on Saturday afternoon.

“I was fuming we conceded at the break – miss a clearance, don’t block a cross and don’t track our runner, it was very frustrating.

“It changed my team talk from a positive one to a different type, but I think Chorley were hard done by to be down at that point.

“Then after the break we switch off at a corner and it’s all level.

“But give the lads credit, they bounced back from that when last year they probably would have crumbled – we are mentally tougher this year.”

And even though his side were awarded two spot kick by the referee, Armstrong was insistent that the visitors should have been awarded a third:

“It was a definite penalty to take the lead, in fact both penalties were, and we should have had a third when Holmes was brought down through on goal for his hat-trick, their player even admitted he clipped him.”

“It doesn’t matter if the referee has awarded two, he needs to give the third, a pen is a pen.”