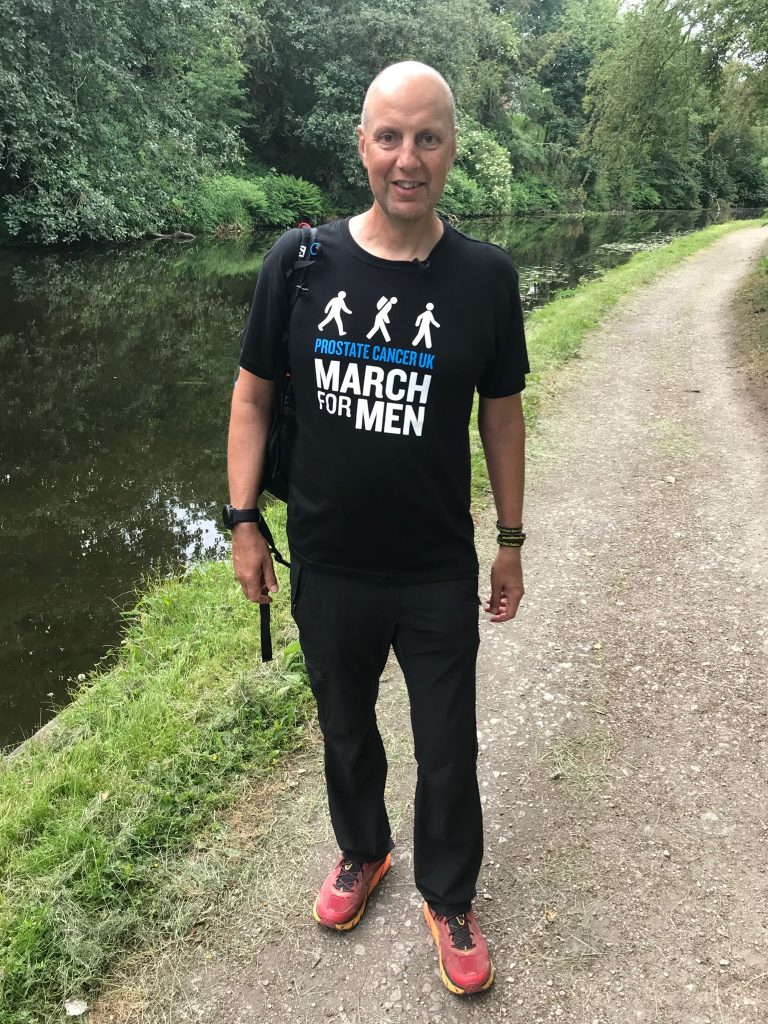 Ultra-marathon hero, Kevin Webber, from Epsom, Surrey, will support Prostate Cancer UK’s partnership with the MANarama National League by taking on taking on seven walking marathons in seven days ahead of Non-League Day on October 13th.

Starting at Blyth Spartans on Sunday, October 7th, the 53-year-old‘s epic March for Men will see him walk more than 180 miles before arriving at the live-on-BT Sport clash between FC Halifax Town and Chesterfield the following Saturday.

In total, he will visit 10 National League clubs, hand-delivering unique captains’ armbands to be worn by the teams on Non-League Day.

This season the National League has chosen leading men’s health charity Prostate Cancer UK as its first ever official charity partner, to unite in the fight against the UK’s most prevalent male cancer, and in a first for English football a national football league has changed its branding midseason.

Vanarama, the title sponsor of the National League, has changed its name to MANarama since the start of September until Non-League Day on October 13th to raise awareness of the deadly disease. In that time 688 men will die from prostate cancer, emphasising the need to take action.

The UK’s leading vehicle leasing company has thus unveiled a striking new logo and also pledged to raise £150,000 in just 43 days from a vehicle-leasing incentive that runs across September, as they tell the nation to ‘lease a van, save a man’. Their own website has also been completely rebranded to reflect its commitment to the fundraising drive.

Vanarama and its newly-launched car leasing platform, Motorama, will donate £50 for every vehicle leased from the start of September until Non-League Day, when a cheque will be presented on October 13th at FC Halifax Town vs Chesterfield live on BT Sport. From September 1 until Non-League day 688 men will die from prostate cancer, emphasising the need to take action.

Webber was diagnosed with advanced incurable terminal prostate cancer in 2014 aged just 49 with three young children and told that he may have only two years to live.

Since then he has raised more than £200,000 thanks to support from his long-time employer RBS, and regularly pushes himself to the limit. Last year he took part in 12 days of Sky Sports’ presenter Jeff Stelling’s epic 15 marathons in 15 days and ran his own marathons for the other three. The father-of-three has also tackled some of the world’s most gruelling ultra-marathons, including the trans-Saharan, Marathon de Sables three times and the Likeys 6633 Arctic Ultra.

One man dies every 45 minutes from prostate cancer, and on Non-League day, all MANarama League captains will proudly wear a unique bright orange captain’s armband, which includes the iconic Prostate Cancer UK logo, to illustrate their clubs’ support against the most common cancer in men.

As well as delivering the armbands, Webber will be wearing customised half-and-half shirts representing the clubs he is travelling from and to.

Kevin’s March for Men will see him head from Blyth Spartans to Gateshead on the opening day, before walking from the Gateshead International Stadium to Hartlepool United on Monday, October 8th. The following day he heads from Victoria Park to Spennymoor Town, and then on to Darlington.

He breaks through the 100-mile barrier the following day and on Thursday heads to York City and Harrogate Town. His penultimate trek, on Friday, October 12th, takes him from Harrogate to Guiseley AFC.

And on Non-League Day he leaves Nethermoor Park and reaches Bradford Park Avenue ahead of their 3pm kick off against Kidderminster Harriers. The final leg takes him to The Shay ahead of the teatime clash against Chesterfield.

Webber said: “In 2014, at the age of 49, when I was told I may only have two years to live, my whole world came crashing down. All I could think about was “two years”. A few months later, after my first session of chemotherapy, I even had a thought that I would never run again, but I decided not to let the cancer win. Instead I ran for 3 slow miles that day and kept on running further and further day by day.

“Since 2015, I have completed many marathons and ultra-marathons including, my bucket list dream, the Marathon des Sables and the Likeys 6633 Arctic Ultra in Canada beyond the Arctic Circle. I’ve met some wonderful people in the last few years and everyone has been so generous in helping me raise much needed funds for Prostate Cancer UK.

“I have loved football at all levels all my life and it has blown me away that the National League and Vanarama have chosen to add their weight to stopping prostate cancer being a killer.

“My personal March for Men is my small way of saying thanks to them, and also doing my bit to help raise awareness and funds for this indiscriminate family-wrecker of a disease.”

Michael Tatershall, National League Chief Executive, said: “Kevin’s challenge is truly incredible and at The National League, and as part of the wider football family, we can’t help but be inspired and enthused to support him.

“Prostate Cancer UK are our first ever charity partner and we are thrilled to be working side by side with them and Vanarama to help raise funds and awareness to combat this deadly disease and support men like Kevin and their loved ones.

“We were proud to make history by rebranding to the MANarama National League and will be behind Kevin every step of the way in this epic challenge.

Angela Culhane, Chief Executive of Prostate Cancer UK, said: “It is truly inspiring that Kevin has once again decided to take on such an immense challenge.

“Kevin has been an incredible supporter of the charity for the past four years and remains fiercely determined to make a difference. He wants to break down barriers, to question taboos, to make a difference to men affected by this disease and their loved ones. His epic achievements over the past four years have done just that and we salute him as he sets off on this exciting challenge.”

Andy Alderson, Vanarama CEO and Founder said: “I had the pleasure of meeting Kevin when he visited our HQ in Hemel Hempstead. I was blown away by his story. His positivity and passion for raising awareness of this deadly disease is commendable. The word ‘inspiration’ is often overused, but in Kevin’s case there’s no better word to describe him.

“The decision to change our name from Vanarama to MANarama was an easy one, especially after meeting Kevin. We’re looking forward to revealing the success of our ‘lease a van, save a man’ campaign at Non-League Day alongside Kevin and Prostate Cancer UK.”

Many people are unaware that prostate cancer is the most common cancer in men. It’s a huge issue that cannot be ignored. One man will die from prostate cancer every 45 minutes in the UK. That’s over 11,800 men a year.

You can sponsor Kevin via: https://www.justgiving.com/fundraising/kevin-webber6 and to find out more information about Prostate Cancer UK’s work in football go to: www.prostatecanceruk.org/football