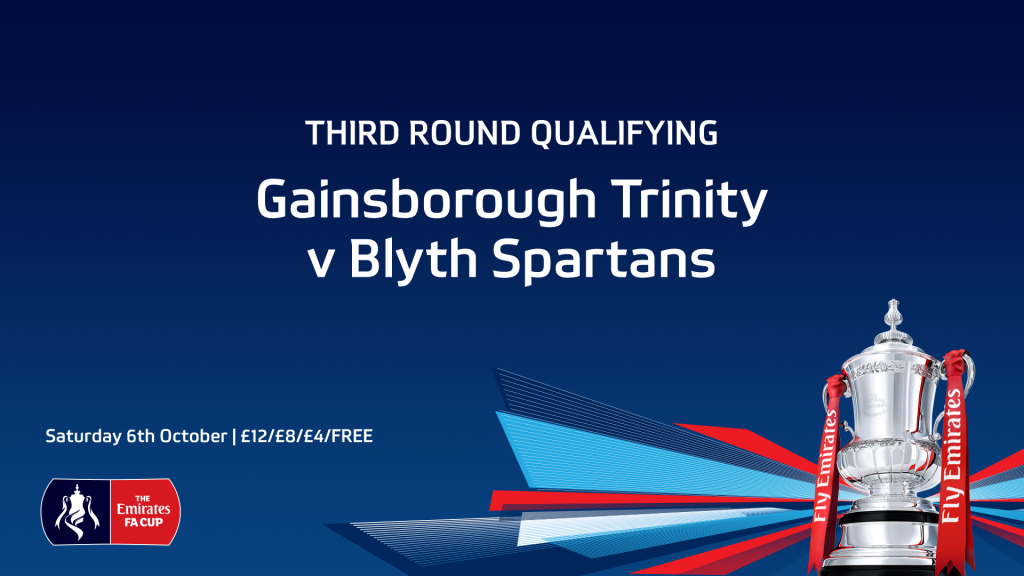 The FA Cup is once again upon Blyth Spartans, and we face a familiar foe in Evo-Stik Premier Division side Gainsborourgh Trinity at The Martin & Co Arena in the third qualifying round of the competition.

Spartans have a storied history in the competition, and will be looking to reach the fourth qualifying round for the first time since the famous run of 2014/15 season. It’s a vital fixture for Alun Armstrong’s side which could potentially bring in £15,000.

Gainsborough Trinity currently reside in ninth place in the Evo-Stik Northern Premier League with 17 points from their nine games played. They sit just one point outside the play-offs as it stands – that position currently held by fellow North East side South Shields.

At home, Trinity have won five out of five at home, conceding just four goals in those five games. Four of those wins were in the league with the other an 8-2 demolishing of Chasetown in an FA Cup first qualifying round replay. They then beat Halesowen Town 3-0 away from home to advance to this stage of the competition.

This game will mark the 40th time the two sides have faced off since the start of the 1995/6 season, with Trinity historically owning the upper hand. They’ve won 14 times, Spartans 12 with the other 13 games playing out in draws.

At the home of the opposition, Spartans have managed six wins, three draws and lost on nine occasions. The sides have met twice in the FA Cup at The Northolme, the hosts coming out on top on both occasions, hopefully we won’t see a similar result this weekend..

In all, Spartans have netted 46 times against Trinity since 1995, Gainsborough recording 53 goals. Robert Dale is the top scorer in the fixture for Spartans in the current squad with four goals – those goals came in the 2006/7 and 2007/8 seasons. Glen Robson is Spartans leading all-time scorer against Trinity with six.

As a player Lee Sinnott was a defender for Walsall, Watford, Bradford City, Crystal Palace, Huddersfield Town, Oldham Athletic and Scarborough. His biggest impact was at Bradford City, where he stayed for five years over two spells, making over 200 appearances. He made 505 appearances in the English Football League, and 653 appearances in all competitions. He played in the 1984 FA Cup Final for Watford, taking home a runners-up medal.

As manager of Farsley Celtic between 2003 and 2007, he won promotion three times in four seasons to take the club from the Northern Premier League to the Conference. This was followed by a short spell at Port Vale in the 2007–08 season. He managed Bradford Park Avenue for ten months in 2009, before returning to the game with Altrincham in May 2011. He led Altrincham to promotion out of the Conference North via the play-offs in 2014, but was sacked in March 2016.

Alex Byrne linked up earlier in the summer with the well renowned V9 Jamie Vardy academy where he impressed a number of coaches. The Trinity management team of Lee Sinnott and John Reed however were able to persuade the attack minded midfielder would be best served joining the Holy Blues where he would link up with a number of familiar faces.

Michael Liddle is available after suspensions ruled him out of the 1-0 win against A.F.C. Telford United last Saturday, with no further injuries picked up by Alun Armstrong’s squad along the way.