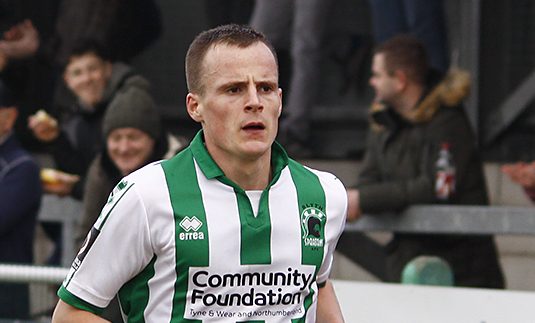 Dan Maguire’s 20th goal of the season had given the hosts the lead inside 10 minutes, but the playoff contenders soon rallied.

The visitors produced a defensively astute second half display – which saw Blyth create very little – but all eyes will be on Foden’s disastrous debut.

In what has become accustomed in recent weeks, Spartans started the game strongly and opened the scoring on 10 minutes.

Kieran Green dispossessed Byrne to allow Maguire to break away, the striker lashing home from the edge of the area with a sublime low finish into the bottom left hand corner.

The tide turned on 25 minutes when Ndlovu’s run into the area wasn’t tracked and Foden brought down the striker. Byrne fired his penalty into the top right-hand corner to level.

Five minutes later Foden then misjudged a Byrne corner – flailing an arm in the face of Dean who bundled the header into an empty net.

Worse was to come for Spartans when Matt Lowe ran free down the right flank before picking out Byrne on the edge of the area – the midfielder striking through a sea of bodies straight past Foden.