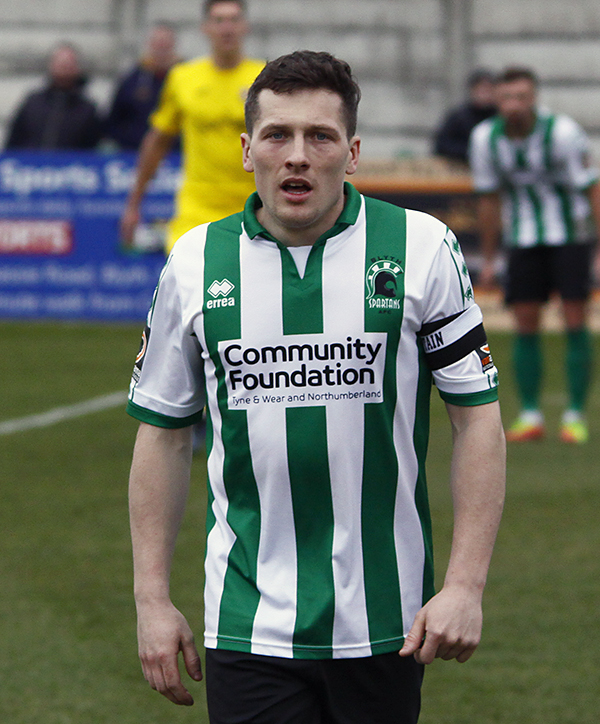 Dale’s 201st Spartans goal cancelled out a John Johnston strike in a first half controlled by the hosts.

Both sides hit the woodwork in the second period as Blyth created the better chances but the game fizzled out into a draw.

Dan Maguire made his 300th appearance for Blyth, but he spent most of the first 10 minutes watching the game from afar.

Altrincham started brightly, and only a timely interception from Louis Laing in the area denied Yusifu Ceesay a chance to open the scoring in the fifth minute.

Spartans first opportunity fell to the aforementioned Maguire when he bobbled an effort just wide of Tony Thompson’s post.

Within 60 seconds the hosts took the lead. A mazy run by Johnston saw Spartans defenders back-off the talented midfielder before curled a low effort into the bottom right hand corner.

In the 26th minute Spartans were handed a golden opportunity to level when Thompson was adjudged to have picked up a intentional back pass just outside his six-yard box.

Reid rolled the ball back to Dale who somehow smashed the strike through six Altrincham defenders who were just three yards away – into the back of the net.

Nine minutes after the interval Spartans were denied the lead by a fine save from Thompson as Nathan Buddle’s goalbound effort was tipped onto the bar and out of play.

Three minutes later it was the hosts turn to hit the bar, Jake Moult’s effort deflected onto the crossbar by Peter Jameson.

On 68 minutes Spartans should have gained the lead. A mistake by the hosts saw Kieran Green latch on to an errant backpass, but the in-form midfielder couldn’t apply the finish.