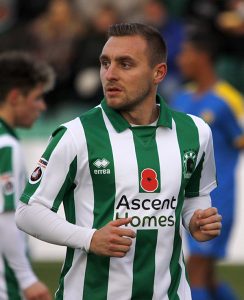 Spartans started 2018 in the same way that they ended 2017 as they tasted defeat against Spennymoor. The returning Dale Hopson curled Blyth into an early lead before Kallum Griffiths equalised with a deflected strike past the helpless Peter Jameson. Rob Ramshaw put the Moors into an early lead in the second half before Glen Taylor fired home a swerving effort to make it 3-1.

Blyth got the game underway in gloomy conditions with a trio of changes as Dale Hopson, Michael Liddle and Ryan Hutchinson returned in place of Jarrett Rivers, Ian Watson and Greg Rutherford.

Both sides took time to settle in the opening 5 minutes as Blyth looked to acclimatise to kicking uphill and towards their band of travelling support.

Robbie Dale escaped down the left as he got away from Griffiths before trying to cut inside however his ball was overhit as he aimed towards Sean Reid at the far post but it drifted harmlessly out of play.

Glen Taylor had the first meaningful effort of the game as he turned on the edge of the area before firing in a right footed shot that was turned away at his near post by Peter Jameson.

Adam Wrightson broke with pace and broke into the Spennymoor box before seeing his run brought to an abrupt end by a great sliding challenge by James Curtis.

Blyth took the lead as David Atkinson did well down the right to win a corner. Robbie Dale and Dale Hopson played a series of short passes which allowed the latter space and time on the edge of the area. Hopson curled a beautiful first time effort in off the near post with Shane Bland diving for thin air.

There was almost an instant reply from the home side as Rob Ramshaw kept in a long ball before hooking the ball into the box. Taylor was waiting for waiting to volley the ball home but it took a goal saving block from Nathan Buddle to put the ball out for a corner.

Blyth almost doubled their lead on 25 minutes when the ball broke to Kieran Green 25 yards out who strode on the ball and rifled an effort that destined for the top corner until Bland acrobatically tipped the ball away for a corner.

Spennymoor who for the first 30 minutes had really struggle exert any authority on the game almost got level when Griffiths whipped a dangerous ball into the middle which was just ahead of Taylor as he looked head home.

Spennymoor levelled against the run of play on 36 minutes; Michael Liddle had done well to shepherd Ramshaw away from goal but a neat turn from the winger allowed him to cut the ball back to Griffiths. The Spennymoor right back struck the ball well destined for the near corner but aided with a heavy deflection it flew into the far corner past Jameson.

The home side were pushing for a second and Ramshaw thought he had won a penalty as he tumbled in the box under a challenge from Atkinson but the referee rightly waved away the appeals. No yellow card was forthcoming for the forward though.

On 42 minutes, Ramshaw was again involved as he volleyed an effort from the edge of the box following a headed clearance by Hutchinson.

Blyth responded, Green was wrestled to the floor by Chantler but the referee allowed play to go on as Green was able to release Wrightson but the lively winger was unable to stab the ball past Bland.

It took the hosts only 2 minutes into the 2nd half to go ahead as a defensive error from Buddle was seized upon by the home side and Ramshaw was released one against one with Jameson and he bobbled the ball home.

Spartans were cut apart by the rampaging Henry and the midfielders cross was turned away by Liddle but only as far as Ramshaw who saw his effort deflected wide by the Blyth full back.

Blyth were on the ropes and Spennymoor had a great chance to add to their lead as a ball swung in from Anderson was nodded down by Taylor but the onrushing Foley was just unable to get the final touch the divert the ball home.

Wrightson who had looked Blyth’s most dangerous player in the first half escaped down the left and away from the diving challenge of Chantler but his cut back was diverted away by Curtis.

Robbie Dale so often the heartbeat of a Spartans side was intent on causing problems for the home side and did so on 65 minutes when he skipped by Chandler before slipping the ball through to Hopson. However, the touch was heavy and the chance was gone before Hopson tried to redeem himself but his ball back into the middle was over everyone.

The hosts did add a third goal on 68 minutes, Anderson crossed the ball through to Taylor who took the ball down and ran through on goal before arrowing an effort that moved away from Jameson and just inside the far post.

Spartans tried to get back into it as the game wore on and Sean Reid who had played as the lone striker for much of the game volleyed an effort from 25yrds but it lacked any real power and was comfortably gathered by Bland.

Jordan Laidler who had arrived as sub and came on to replace Wrightson showed some trickery to get away from Chantler and crossed towards the penalty spot. It was headed away but only as far as Green who moved the ball on to his left foot but sent it wide.

As Spartans pushed forward in the hope of creating a grandstand finish it looked more likely that Spennymoor would add to their tally. A great ball in from Johnson was deflected behind by Atkinson with Taylor again poised.

As it was there was to be no further chances with Spennymoor deservedly taking the 3 points on a disappointing afternoon for the Spartans who were unable to capitalise on their first half dominance.

Next up for the Spartans is a tough home game on Saturday 6th January against Gainsborough Trinity at Croft Park with a normal 3pm kick off.

Subs not used: MacDonald, Watson, I.