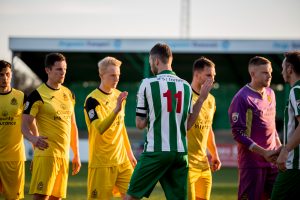 A spirited Blyth Spartans were unable to beat Nuneaton Town in order to give themselves a chance of sneaking into the playoffs – however, it did not matter as both Bradford Park Avenue and Spennymoor Town won.

George Green opened the scoring for the Boro soon after the news filtered through of Bradford and Spenny losing before half-time.

Robbie Dale equalised 10 minutes from time as Spenny turned it around against Southport but Ashley Chambers instantly restored the hosts’ advantage with Spartans pushing for the win.

To Blyth credit, they continued to fight until the end for the fantastic travelling supporters and earned only their second draw of the season through Sean Reid’s 88th-minute stunner.

As Spartans looked to apply early pressure on their playoff rivals, Dan Maguire thought he had given his side the lead after four minutes but his celebrations were cut short by the offside flag.

News filtered through about Southport – soon after Reid should have connected better with a cross from the right-hand side – and Kidderminster’s leads against Spennymoor and Bradford, however fell behind themselves in the 24th minute.

Moments before Green had fed in Chambers – forcing a good save from Peter Jameson – Green himself broke the deadlock following a neat finish after being found in-behind the Blyth defence.

Blyth reacted fairly quickly to going one goal down, and on 30 minutes, the visitors’ bench and travelling fans were left scratching their heads as to how they hadn’t equalised.

Maguire lofted the ball over keeper Ross Etheridge and appeared to be bobbling in only for David McTiernan to stick a leg out near the goal line and divert the ball away from the target.

Two minutes later, a debatable offside decision then prevented Maguire once more after he headed home from inside the six-yard box from Andrew Cartwright’s cross.

Armstrong’s men created one last opportunity before the half-time whistle as Dale’s corner was cleared into the path of Adam Wrightson on the edge of the box, but despite a sweet connection, the shot floated over the bar.

Blyth were unable to carry the momentum from the final 15 minutes into the first-half, and their hopes of reaching the playoffs took a big blow as Spennymoor turned it around against Southport.

It’d be Blyth’s captain Dale that would drag his side back into it as his low drive into the area found its way into the bottom right-hand to give Blyth hope of a comeback.

And with the Spartans players knowing a win was required to possibly claim seventh place, they instantly committed bodies forward and that left them short at the back allowing Chambers to sneak in and regain the hosts’ lead.

Spartans fought until the end and managed to carve out another equaliser courtesy of Reid’s shot from outside the box that sailed into the top corner.