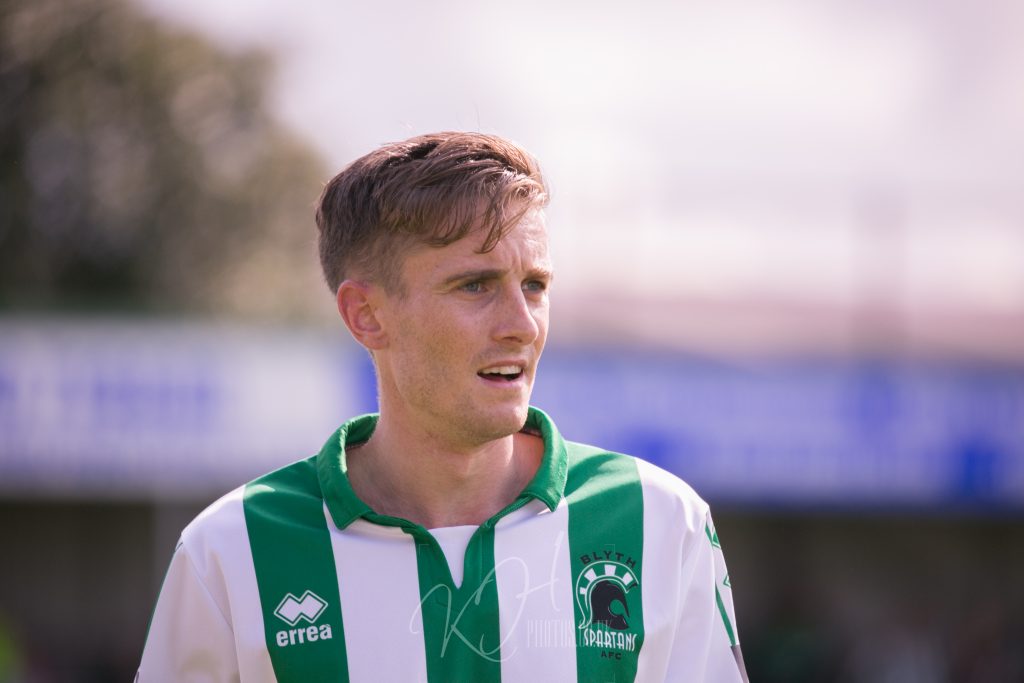 Blyth managed to overcome tough opponents Altrincham 2-1 thanks to goals from Sean Reid and Jarrett Rivers to give Blyth Spartans their second win of the season.

Blyth opened the scoring in the 25th minute when Sean Reid and Lewis Horner played some great passing football to work their way into the box with Horner knocking a ball through for Reid to lob the charging Wynne with a first time shot.

Altrincham equalised a minute later when Hancock got on the end of a through ball and smashed his shot into the far left corner past a diving Jameson to cut Blyth’s celebrations short.

The match continued to be competitive between the two side which both of them having spells of dominance but it was Blyth who came out on top when Rivers managed to get the ball in the box and fire a shot in the roof of the net in what would be the winning goal in the 82nd minute.

Blyth Spartans made two changes from the side that lost to York City with Michael Liddle and Aaron Cunningham returning to the defence in place of Alex Nicholson who missed out due to illness and Connor Oliver who dropped to the bench.

They were quickly challenged on their return by Jordan Hulme and Max Harrop who combined frequently in the early stages of the match with the best chance coming 6 minutes in, when Hulme made a run out wide and whipped a cross into the area with Harrop managing to get his head on it but sent it narrowly wide.

Maguire managed to get a chance for Blyth when he got on the end of an over the top through ball but couldn’t get a clean shot.

Harrop continued to cause problems for Blyth when he managed to get himself into space to have a shot but his volley from outside the box was tame and ended up going wide.

Both teams had chances to score as the match became competitive end to end action. Horner found himself in space outside the box, he got a shot away that went wide. Hulme got a chance at the other end as he charged to towards the Blyth goal and got a strike away that went into the side netting.

Blyth opened the scoring in the 25th minute as Horner and Reid played a one to two between each other with Horner sending a ball through for Reid who took it first time and put it over the keeper to make it 1-0 to Blyth.

Blyth’s lead didn’t last long as Altrincham equalised a minute later when Hancock managed to run into the Blyth box and strike the ball into the far left corner of the goal.

After the equaliser, Altrincham continued to put pressure on Blyth with Hancock becoming an issue for them. Hancock found himself free in the box from a corner but his header went wide. Hancock got himself another chance not long later, having a strike at goal from outside the box that went narrowly wide.

Blyth got themselves back into the match with Maguire having a chance at goal as turned around a Altrincham defender and had a powerful strike that was saved by the keeper. Dale cut inside and had a left footed shot at goal cleared of the line by White.

The second half started with few clear cut chances. Maguire managed to challenge the keeper when Jameson launched a ball up the pitch where Maguire controlled it with his chest and had a first time strike at goal that had some power behind it but the keeper was able to deal with it.

Blyth got another chance to take the lead when Rivers floated a ball into the box for Reid who sent his header over the bar.

Altrincham came back into the match as Densmore sent in a low cross into a box that Hulme backheeled into the side netting. They continued to have chances as Williams took one touch control the ball and hit it first time into the stands.

Oliver played a great ball to Wrightson who used to his pace to charge past defenders and get a shot away that went narrowly wide of the left post.

Altrincham dominated for a large portion of the match as they kept trying to find a winner. Hancock had a great shot from outside the box saved by a driving save from Jameson. Hulme had a great chance one on one with Jameson inside the box but the keeper managed to save Hulme’s effort with his left leg.

Blyth had a corner that bounced around the box only to fall to the feet on Rivers who sent his shot into the roof of the net to give Blyth the lead again.

Poole had a great chance to score from a free kick but it was saved by Jameson only to land at the feet of Peers who missed a glorious chance to equalise for Altrincham.

Maguire had the last chance of the game in stoppage time but his shot went straight at the keeper and the referee blew for full time.

A great win for Blyth at home after some unlucky results in the last few games. They will be looking to build on this performance and continue to strong in their next game when they travel to Kidderminster next weekend.

Sponsors’Man of the Match – Dan Maguire