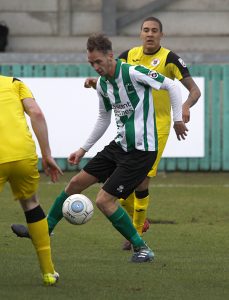 It was an afternoon to forget as Blyth were well and truly beaten as a superior Harrogate Town side enhanced their promotion hopes. McCombe headed the hosts into the lead on 10 minutes, Wright doubled the lead against the run of play before Sean Reid grabbed a goal back for Blyth. Dominic Knowles bundled home the third before the interval. Further goals in the second half from Thomson and Wright made the score 5-1.

Blyth manager Alun Armstrong was forced into 3 changes as the Spartans looked to get their playoff hopes back on track. Joe Gorman, Jordan Laidler and Macauley Langstaff came into the side for David Atkinson, Ben Liddle and Dale Hopson respectively.

A change in formation was evident with Blyth reverting to a central defensive back three with Jarrett Rivers and Michael Liddle operating as wing backs and Macauley Langstaff upfront with Robbie Dale.

The Spartans got the game underway in monsoon conditions in North Yorkshire. The hosts were first to threaten when Dominic Knowles flicked a header from the edge of the area towards goal but the ever-alert Peter Jameson was able to palm the ball over the bar.

The hosts deservedly opened the scoring on 10 minutes as a corner from Joe Leesley from the right was curled into the box and a simple header from McCombe was nodded home. It was no less than Harrogate deserved for being on the front foot from the opening whistle.

Blyth responded with a change in formation to the more trusted 4-2-3-1 and it almost paid dividends as a through ball from Sean Reid was just in front of Damen Mullen but Robbie Dale had gambled and from a tight angle was unlucky to see his effort rebound off James Belshaw in the Harrogate goal.

On 19 minutes, Jordan Laidler was invited to come forward and the defensive midfielder hit an effort from 25yrds that left the crossbar shaking. Robbie Dale picked up the loose ball and drove into the corner of the box before tumbling to the floor under pressure from Ryan Fallowfield but the referee wasn’t interested.

A more dominant Spartans side upped the ante as the half wore on, Sean Reid was fouled as he flicked the ball forward, the referee played a good advantage to allow the ball to come through to Jarrett but the former Blackpool winger sliced his shot wide of the target when well placed.

Harrogate hit back and were inches away from doubling their advantage as the dangerous George Thomson hit a drive from the corner of the box that zipped off the wet surface and wide of the far post with a sprawling Jameson relieved to see effort go wide.

Despite the pressure applied from Spartans, it was Town who doubled their lead on 36 minutes. Moments after Jake Wright had seen a cross deflected up onto the cross bar, the forward was able to make it 2-0. A corner was met with a towering header as Blyth switched off again from a set piece.

Blyth got their reward on 39 minutes for their endeavour and pulled a goal back. Robbie Dale played the ball into Michael Liddle and the full back crossed the ball to the far post where the marauding Sean Reid was able to volley home.

The scoring wasn’t finished before the interval though and it came with more than a hint of controversy. Damen Mullen had produced a heroic block to stop Thomson from smashing home. Another corner caused chaos in the box as a sense of déjà vu struck the Spartans supporters. The ball was curled into the far post and was eventually bundled home by Dominic Knowles. The Spartans players were incensed with the officials as they failed to spot Knowles was beyond Jameson and with only one Blyth player on the post, he should have been flagged offside.

Harrogate could have even added a fourth in added time at the end of the half as Fallowfield who had been terrorised by Robbie Dale, got forward and twisted Michael Liddle inside and out before rifling a right footed drive that sailed over the bar.

The second half had barely got underway before it was halted as Ryan Hutchinson went down under an innocuous challenge with Falkingham. Hutchinson was stretched off and it seemed unlikely that he will be returning anytime soon.

On 53 minutes, Knowles used his strength well to bully Gorman off the ball and slip the ball through to George Thomson who was one on one with Jameson and the winger slipped the ball under the advancing Jameson and into the back of the net.

Blyth looked to hit back and on the hour mark, Langstaff had two opportunities to reduce the arrears. Firstly, he curled an effort from the edge of the area that cleared the crossbar after working some space. Moments later, he was released and raced through to face Belshaw, it took a last ditch challenge from Warren Burrell to divert the ball behind for a corner.

The horror show continued as Harrogate added a fifth. A long ball was played over the top and a missed interception allowed Jake Wright to get on the end of it. The striker was allowed time and space to turn before he curled a sumptuous effort into the top corner.

Heads began to drop as another heavy away defeat loomed, a loose ball in the midfield was seized upon by Harrogate and a ball was played to Joe Leesley but his effort skipped off the turf and beyond the far post.

Adam Wrightson was brought on to try and stretch the Harrogate backline and he almost reduced the arrears. He did well down the left before cutting into the box and delivering a ball into the area but the arriving Sean Reid was just a fraction late.

The rest of the game petered out without too much incident as Harrogate demonstrated their superior fitness and were able to hassle Blyth into errors.

Next up for Blyth is a home game with Kidderminster Harriers on Saturday as both sides look to secure a play-off place.

Subs not used: B. Liddle, MacDonald