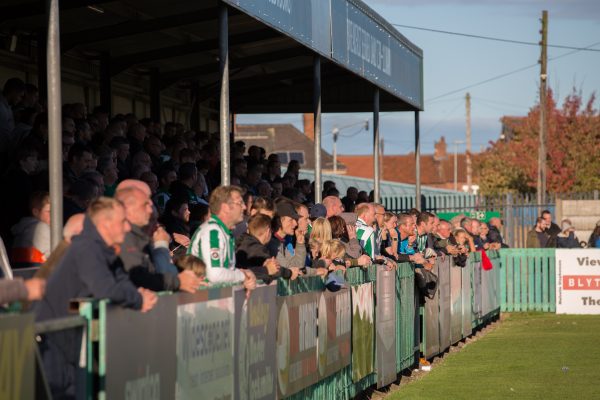 Spartans boss Alun Armstrong gave Darlington a glimpse of exactly what they’re missing on Saturday – after Blyth came from behind to register a 3-1 victory in the first North East derby of this season’s Vanarama National League North.

The 42-year-old was courted as a possible replacement for Martin Gray at Blackwell Meadows and he might well have been questioning his decision to remain in Northumberland half an hour in, when David Syers put the visitors ahead. Whatever Armstrong said at half time worked wonders for his side though – as Adam Wrightson pulled the home side level just three minutes after the restart.

Sean Reid then headed home nine minutes later to turn the tie in Blyth’s favour, before Robert Dale smashed home a third with nine minutes left – as third-placed Spartans consigned former Nantwich boss Tommy Wright to a second defeat at Croft Park this month, in what was his first game in charge of Darlo.

Speed demon Wrightson was deployed up front in place of the injured Daniel Maguire, with new signing Greg Rutherford having to settle for a place on the bench in the first game following his international clearance coming through. Dylan McGlade was also named as a substitute, but the returning David Atkinson was unavailable for this eagerly anticipated clash.

The Quakers’ visit to Croft Park was being billed as a feisty affair and those pre-match predictions looked to be correct when Leon Scott rugby-tackled Jarrett Rivers to the ground on halfway to halt a promising Spartans break. Referee Paul Brown had a word with the left-back, who might have felt very lucky to escape his name going in the book.

Both sides made a cautious start to the game, with no real chance to speak of until Darlo won a free kick on the right wing in the tenth minute. Both David McTiernan and Nathan Buddle saw their headed clearances attempts thwarted by the wind, with the ball carried back into the danger area, but the set-piece amounted to nothing as former Quaker Peter Jameson claimed the loose ball.

The bumper Croft Park crowd had to wait another two minutes for a clear-cut opportunity in front of goal from either side and it fell, once again, to the visitors. Ex-Blyth midfielder Josh Gillies picked out the run of Dominic Collins with a corner, but the defender powered his header over the bar.

Another former Spartan, Adam Bartlett, was enjoying a quiet first quarter of an hour in the away goal, but the hosts threatened for the first time on 17 minutes. Rivers danced into the box and beat Scott in the process, but Terry Galbraith was there to cover and clear the danger.

That opened the floodgates for Blyth, who started to dominate the game with a flurry of chances in quick succession.

A fantastic break from the home side a minute later saw Wrightson move out wide to the left to pick the ball up. He crossed in looking to find Dale Hopson or Rivers in the middle, but Bartlett got a firm hand on the ball to take it away from the waiting pair.

With 20 minutes on the clock, Rivers released Andrew Cartwright down the right. The full-back crossed in early to Wrightson, but the makeshift centre-forward’s touch took the ball away from him and the chance was gone.

Cartwright was then the intended recipient for Robert Dale’s cross two minutes later, but the ball bobbled away to what seemed to be nothing. Wrightson showed great instinct to race onto the loose ball and smashed a shot at goal, but his first-time effort was blocked by a Darlington body.

Spartans continued to press forward as the game entered the 27th minute, with Ian Watson playing a deft one-two with Dale to fashion a chance at the edge of the area. The left-back dragged his shot across goal, however, and the ball rolled harmlessly into the arms of Bartlett.

Blyth’s frustrations at one end were then compounded on the half-hour mark, when the Quakers took the lead through another Gillies corner.

The ball dropped perfectly for Cartwright to boot the ball away to safety, but his poor clearance fell straight to the feet of Syers just right of goal. The forward took a touch before dispatching a neat finish past Jameson, beating the keeper low at his near post.

Spartans twice had opportunities to restore parity with the first half drawing to a close, but wasted both chances when presented with corners in the final five minutes before the break.

There was still time for Darlington to try and turn the screw with a second goal, when another poor clearance – this time off the head of Rivers – dropped invitingly for Syers again. Thankfully though, he blazed a shot well off target from the edge of the area – as Blyth went in behind after a scrappy first half affected heavily by the windy conditions.

Darlington were quick out of the traps at the start of the second half and looked to be desperate to add a second early on, but Blyth pegged them back on 48 minutes – after a great break from part-way inside their own half.

Rivers slipped the ball through to Wrightson, who still had plenty to do as he ran at goal. The diminutive forward shot low across Bartlett, with the ball bouncing in off the far post.

The Blyth bench were then incensed four minutes later, when Dale’s shot was blocked by Scott’s raised hand in the box. Their shouts for a penalty fell on deaf ears though – as Brown remained unmoved.

The home dugout were back on their feet on 57 minutes, but this time it was in celebration after a well-worked Hopson free kick.

The ball in dropped to Buddle, who did well with his back to goal to play the ball out to Dale on the left and keep the attack alive. The Blyth captain stroked in a pinpoint cross and found the head of Reid, who gave Bartlett no chance with a glancing header down towards the bottom corner.

Darlington appeared shell-shocked after conceding twice in nine minutes, but looked certain to draw level again just after the hour mark when Nathan Cartman played a ball into the path of Gillies inside the Blyth box. Presented with the simplest of opportunities to score against his former side, the winger was denied by Jameson’s fantastic stop with his foot.

The away side came close to an equaliser again on 65 minutes, when Galbraith’s free kick saw Jameson raise his hand in the air for an offside appeal. With play continuing, Syers looked to take full advantage of the mix-up but his shot was diverted behind off the leg of Jameson.

The resulting corner then resulted in a goalmouth scramble in the home side, but Rivers did his job at the near post by hacking the ball away on the line to keep the visitors at bay once more.

Another Hopson set-piece nearly presented Spartans with another goal with 19 minutes remaining – as his drilled free kick towards the penalty was turned towards goal by Wrightson. He did well with the volley, but Bartlett was able to save well down to his right.

Dale then flashed a ball across the face of goal looking for Rivers four minutes later, but the winger was unable to poke the ball home and give the hosts a two-goal advantage.

Hopson presented a similar chance for Reid to get his second of the afternoon on 78 minutes. Unfortunately though, the lofty midfielder stabbed the ball wide of goal when he really should have done better.

That miss was all but forgotten three minutes later though, when Dale produced his vintage best to give Blyth breathing space.

Twisting and turning as he glided into the area down the left, the talismanic winger profited well from a ricochet off his marker to set the ball up for a shot. Dale is no stranger to fantastic goals and this one was no different – as he smashed an unstoppable effort past his former Spartans teammate Bartlett and into the roof of the net, to the elation of the majority of the 1554-strong Croft Park crowd.

Rutherford and McGlade then made their Spartans bows on 85 minutes, replacing Wrightson and Dale respectively – as the Croft Park crowd rose to their feet to give them a standing ovation, before they were back on them at the final whistle to celebrate an impressive victory over their North East neighbours.

Spartans now have a full week to bask in the glory of their North East derby win, before they make the trip to Bradford Park Avenue for a 1pm start next Saturday.