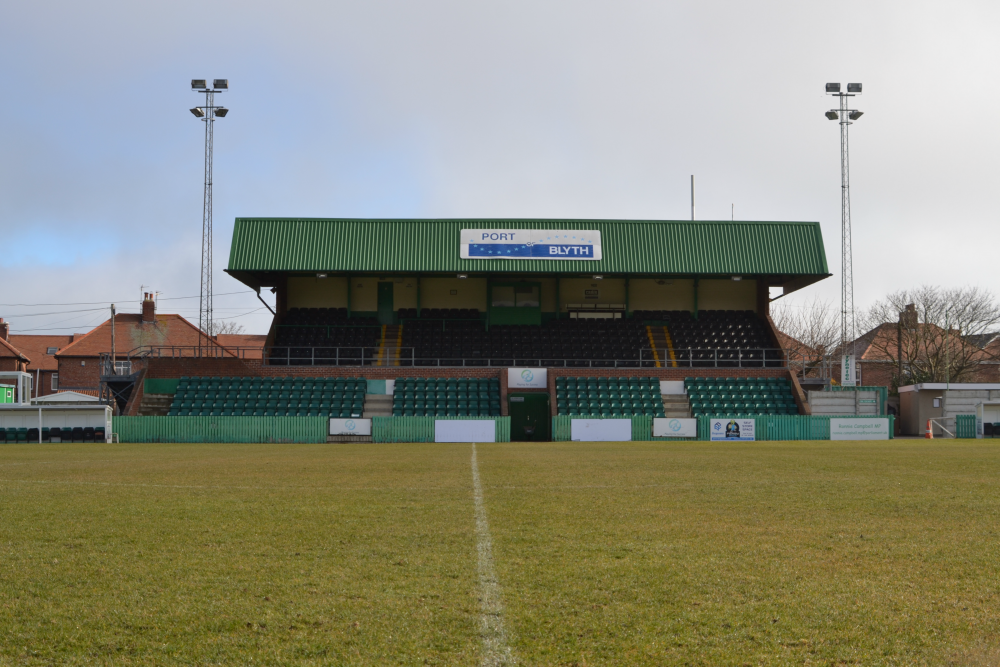 A blistering performance from Blyth saw them blow away near-neighbours Bedlington in this Northumberland Senior Cup tie.

The 11-1 scoreline could have been even more emphatic if not for some eye-catching saves by the Terriers goalkeeper Jak Wells.

The Spartans were up for it from the start with Daniel Maguire testing the visitor’s defence before Blyth took the lead on four minutes. Bedlington’s Paul Wardle played the ball off Blyth’s Jarrett Rivers and it fell to Michael Richardson who took the ball round Wells and calmly poked it home.

However, within a minute of the restart a ball down the middle eluded the Blyth defence and Terriers’ striker Jack Foalle did well to lob over Adam McHugh in the Blyth goal to equalise.

The Spartans took this set-back in their strike and went on to dominate the half, and the game.

Richardson fired wide twice from distance before an intricate move from Blyth saw the former Newcastle midfielder find Sean Reid with audacious flick. Reid’s effort was cleared as the pressure mounted on the visitors who struggled to contend with the Spartans’ pace and movement.

Jarrett Rivers cleverly created space for himself but his shot was blocked. A Richardson cross was then headed just wide by the leaping Reid. Incessant Blyth pressure saw Rivers and Maguire linking up to provide Reid with an opening and only desperate defending saved the day for the Terriers.

Rivers shot straight at Wells before Blyth’s dominance resulted in them taking the lead.

After 32 minutes Rivers’ trickery proved too much for Luke Walton and his searching cross fell to Reid at the back post. Wells got a hand to Reid’s effort but couldn’t prevent in hitting the back of the net.

Within three minutes the Spartans made it 3-1. Neal Hooks found Reid who in turn picked out Maguire. The Blyth front man then instinctively slotted the ball through to Rivers who side-footed the ball past Wells.

Minutes later a sweeping move concluded when a Rivers cross from the right was met by Reid who only needed one touch to slam the ball beyond Wells.

Faolle had a chance to pull a goal back but he shot over from 22 yards.

Half time must have come as a welcome relief for Bedlington. But their heads must have sunk after the break when Blyth brought on three top quality substitutes in the form of Robbie Dale, Matty Pattison and Nathan Buddle. Unsurprisingly the subjugation of Bedlington continued unabated and, indeed, it intensified.

After only six minutes the onslaught continued when Reid robbed Chris Armstrong. His delicate flick was pounced upon by Richardson who drove forward and stroked the ball past Wells. On 57 minutes a deep cross from Dale found Pattison in the penalty box. The South African controlled the ball with aplomb before ruthlessly powering a shot across Wells and in to the bottom corner of the net to make the score 6-1.

Richardson once more narrowly missed the target before, on 62 minutes, he met Pattison’s accurate cross and steadied himself before finishing with ease. Only a minute later Rivers came close to extending the lead further but Wells was alert to the danger and saved well. However the Bedlington keeper could not deny the effervescent Rivers for long as, almost immediately, the Blyth winger gave him no chance with a shot of power and precision.

Wells was back in the thick of things making a top drawer save from Pattison.

The Spartans stunning showing showed no sign of abatement and on 74 minutes a Pattison cross was well controlled by Rivers who turned and swiftly despatched the ball beyond Wells to make it 9-1. A thundering Reid effort was excellently turned over the bar by the acrobatic Wells but this was only to delay the next Blyth goal: an absolute screamer by Richardson which flew in to the top corner of the net giving Wells absolutely no chance.

Pattison brought out the best in Wells again before a rare foray up field by the visitors saw Lee Scott rattle the Blyth bar.

Inevitably though it was the Spartans who had the final say when, with two minutes remaining, Rivers fed Dale and the Spartans winger rifled the ball in to the bottom corner of the goal to make the final score 11-1.