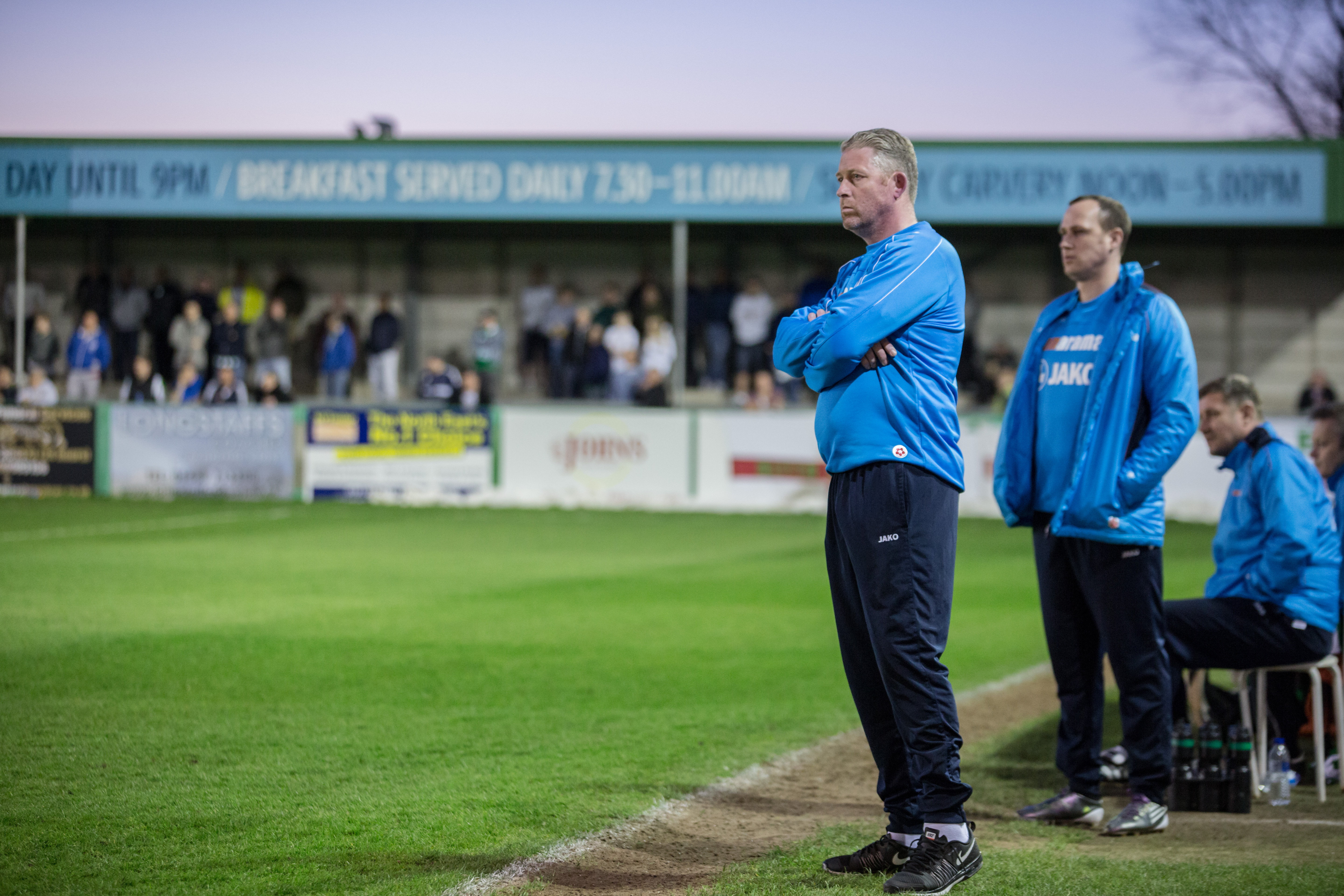 When a County corner went out for a throw-in on the far side off Jason Oswell at the end of a very evenly contested first half, Matthews mistakenly gave the visitors a throw-in. Blyth’s dismay was then compounded when Jimmy Ball smashed home from 18 yards following the restart, especially when they’d also appealed for a handball by Oswell in the build-up as well.

In addition to being unable to find an equaliser in a commanding second half showing, Spartans’ miserable final Saturday home game of the season also saw their squad depleted even further – as Jordan Laidler, Jarrett Rivers and Andrew Cartwright all hobbled off during the second half, to add insult to injury on a truly unforgettable afternoon against the former Football League side.

After watching his side end their seven-game run of defeats with a comfortable 2-0 win over Southport on Tuesday night, Alun Armstrong made one change to the starting XI for the visit of his former club – after the ex-centre forward spent four years at Edgeley Park between 1994 and 1998, making 160 appearances and scoring 49 goals. Left-back Michael Liddle came back in for Ian Watson, having sat out Thursday night’s win.

The visitors arrived at Blyth looking to cement their fifth place standing for the playoffs and forced a corner within the first four minutes. Scott Duxbury swung one in from the right, but Cartwright headed clear as first man at the near post.

Stockport looked to make hay while the sun shined again two minutes later, when a ball was played in from the left looking for Oswell. The ball ran just behind him though, with David Atkinson able to take full advantage to clear.

Damon Mullen ran at goal two minutes before the 15-minute mark and played a delicate ball through for Daniel Maguire. The forward turned and shot but was unable to keep his attempt under the bar.

Mullen was at the heart of Blyth’s next attack minutes later, when he teed up Sean Reid 20 yards out. The attacking midfielder’s effort was far from worrying Stockport keeper Ben Hinchcliffe though.

Matty Warburton went for the spectacular on 22 minutes, having broke through Blyth’s back-line amid desperate offside shouts. He tried to chip the advancing Peter Jameson, but got it all wrong and the ball sailed over the frame of the goal.

Mullen went on another driving run almost straight from the restart and hesitated as he carried on into County territory, looking to play provider once more. ‘Damo’ opted against that this time and struck one himself from distance, but his fierce strike fizzed just over with Hinchcliffe flapping at it.

A lovely lifted ball from Robert Dale released Liddle down the left with 28 minutes gone, but the left back’s first-time cross was blocked by a blue body in the box.

Oswell bore down on goal just after the half-hour mark under pressure. Nathan Buddle dived in at his feet in the box as he shot, but Jameson was still required to get down at his near post and palm it behind.

From the resulting corner, Chris Smalley headed the ball down into the ground, only for it to bounce back up and onto the bar, but went behind to the relief of the Blyth defence.

Blyth had a corner of their own cleared soon after, with a follow-up ball – which was floated back in looking for Buddle – headed out as far as Mullen at the edge of the box. The midfielder volleyed a first-time strike back in, but his effort was blocked away.

Just as the delicately-balanced first half appeared to be coming to a close, controversy contrived to give County a crucial advantage going into the break when a Stockport corner sailed straight out across the other side of the pitch.

With Spartans aghast at what appeared to be an incorrect County throw – which was also taken further up the pitch than where the ball had went out – things went from bad to worse when there were also suspicions of a Stockport handball as Oswell teed a shot up for Ball. The winger – of course, given all the contentious decisions that had led to this point – smashed home from 18 yards out, much to Armstrong’s frustration – as he angrily remonstrated with Matthews as the teams left the field at the end of the half.

Obviously dismayed at the way the first 45 ended, Spartans started the second half in the ascendancy – as they carved out two half-chances within the first three minutes. Reid struck wide with an ambitious attempt from a tight angle, before Laidler put one past the outside of the upright from distance soon after.

Reid then had another chance on 51 minutes, when he rose to meet the cross from Liddle. However, it wasn’t plumb for the lofty Spartan and his awkward header at the near post was off-target.

Unfortunately, Laidler’s game was over on 54 minutes when he went down in some discomfort in the home half. After a prolonged spell off treatment on the pitch, the midfielder hobbled off with the support of both physios Chris Bell and Rob Wark to applause from all four sides of Croft Park.

Spartans were agonisingly close to an equaliser five minutes after the hour mark, when Rivers crossed in from the right looking for Dale. However, the ball sailed inches over the Blyth captain’s head and the chance went begging.

Armstrong’s injury woes increased further still when Rivers went over on his ankle in front of the away dugout with 69 minutes gone, meaning Adam Wrightson came on to replace him at right-wing.

And the diminutive winger nearly had an instant impact as well, when he was picked out on the penalty spot following Dale’s corner. Wrightson’s strong snap-shot looked destined for the bottom corner, but an outstanding one-handed save from Hinchcliffe low down to his left helped him to keep his clean sheet intact.

Oswell got the ball fed into feet inside the Blyth box with 13 minutes to go and looked certain to score. However, he was thwarted by a diving Buddle once again – as the centre-back dived at his feet, just as he had in the first half to block his shot.

On 87 minutes, Maguire got his head onto Dale’s cross and looked to have finally brought his side level. To the despair of the Croft Park faithful though, his header flashed across the face of goal and wide.

Cartwright then tweaked his hamstring in the first of what ended up being ten added minutes at the end of the second half to complete a hat-trick of injuries and a thoroughly frustrating afternoon for the home side – as they failed to get the rewards that their performance had more than deserved.

Blyth now go on to their final home game of the 2017/18 Vanarama National League North season, when they welcome Curzon Ashton to Croft Park on Tuesday evening (7:45pm kick-off.)