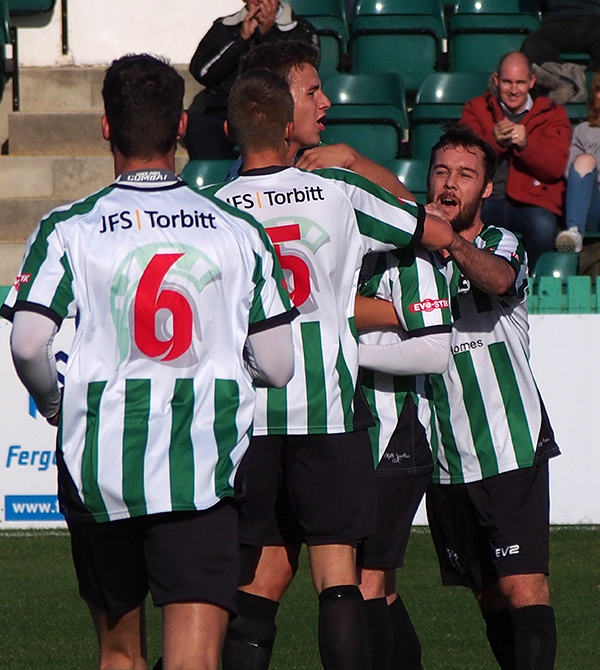 Blyth Spartans twice came from behind to force a replay in a compelling FA Trophy Third Qualifying Round tie – as they held Vanarama National League side Altrincham to a 2-2 draw.

The hosts went ahead on nine minutes through Jake Moult’s header, before Jarrett Rivers nodded in an equaliser. Moult scored his second from the spot, before substitute Sean Reid ensured the game remained level at the break.

Both sides went close to securing a home tie against Macclesfield Town in the second half, but the pair will have contest a replay at Croft Park on Saturday to determine who progresses.

Blyth were forced into three changes against the Vanarama National League North side – as captain Robert Dale, Stephen Turnbull and on-loan David Atkinson weren’t available for selection. That meant Jarrett Rivers, Matthew Wade and Andrew Cartwright returned to a Spartans side wearing their yellow change kit for the first time this season.

Altrincham appeared to be desperate to put their disastrous league form to one side – with only one win in 18 so far – and came straight out of the blocks early. Craig Hobson drilled a ball across the face of goal on two minutes, but Michael Liddle was there to clear the danger.

Hobson then met a cross at the front post two minutes later, but he couldn’t do enough to force Paul Woolston into anything other than a routine stop.

Blyth’s first real chance at goal came when Matty Pattison was bundled over 20 yards from goal. The South African stepped up to dispatch the set-piece himself, but his effort uncharacteristically went well off-target.

The Robins continued to try and press in the early stages and they were rewarded for their efforts, when the went 1-0 up inside ten minutes.

Damien Reeves had a header saved by Woolston and, while the ball appear to have been cleared, the home side were able to knock it back in and Moult was there to powerfully head in the game’s opening goal.

Pattison then went close again, but whether he meant it or not is another matter. His cross/shot from the left went over the head of Tim Deasy, but fizzed just over the crossbar and onto the roof of the net.

The back-and-forth nature of the opening spells continued and Altrincham could have doubled their lead on the 15-minute mark. Simon Richman unleashed a powerful effort from long-range, but a fantastic stop from Woolston saw the on-loan Newcastle United stopper parry the ball over the bar.

Less than 60 seconds later, Blyth had a good chance to punish Altrincham’s wasted chance. Pattison picked out Armstrong from the right wing, but the striker could only head wide under pressure.

Blyth continued to apply pressure and they were nearly presented with a gift from former Gateshead goalkeeper Deasy in the 19th minute.

Some trickery from Daniel Maguire in the area ended with him firing a strong strike at goal, which was spilled towards his own goal by Deasy. Luckily for him though, Tom Hannigan was on hand to hack the ball away and River’s rebound was blocked behind.

Maguire scored two goals against Alty in the 4-1 Emirates FA Cup First Round between the two sides back in 2014 and he looked to be a handful for the home side once again – as he had a good shout for a penalty when he was brought down in the box two minutes later. Referee M Woods remained unmoved by the appeals though.

Blyth’s attacking spell really warranted an equaliser and it came on 23 minutes, following some excellent play on the right from Pattison. The former Newcastle United midfielder then crossed in from the byline, which was headed home by the unlikely figure of Rivers to restore parity.

Rivers had a good chance to double up on the half-hour, when Sean Reid – who had replaced Maguire following a knock to Nipa’s knee – was beaten to a header by Hannigan. The ball fell nicely for the winger, but he could only fire over the bar.

Blyth were well on top by this point, but Hobson fired a warning shot that the hosts were still in the contest. The ball fizzed across Woolston, but went well wide of the upright.

Spartans continued to push forward and another error from Deasy nearly gave them the lead with 33 minutes gone. His parry from Pattison’s shot bounced off Armstrong and looked to be going in, but Deasy was able to atone for his mistake by finally gathering the ball on the line.

Unfortunately for the visitors, they literally handed the initiative to their opponents with six minutes of the half remaining – after Michael Liddle was adjudged to have handled the ball in the box. Moult stepped up and smashed in his second straight down the middle of the goal, which went in off the underside of the bar.

With time running out before the break, Blyth were able to reply instantly with a second equaliser on 42 minutes. Armstrong’s header from Rivers’ cross forced another spill from Deasy and Reid was able to burst the net with a ferocious strike on the rebound from two yards.

Following a frantic finish to the first half, the start of a second half was more of a subdued affair.

So much so, in fact, that the spectators at Moss Lane had to wait eight minutes for the first real action after half-time. Richman played the ball into the feet of Damian Reeves inside the box, but his shot on the turn was blocked behind by a Blyth body.

Spartans had to wait until the 65th minute for their first real chance of the second 45 and it came from Rivers’ corner. The ball was cleared only as far as Damen Mullen 25 yards out, but he snatchedf at his strike and it went well off-target.

Only three minutes later though, Mullen turned provider – as his through-ball was deflected into the path of Pattison on the right. The winger opted to fire first-time from a tight angle, but his fierce rocket could only clear the bar.

Richard Pell then tried to divert Rivers’ free-kick towards goal with his leg, but he was always stretching and the ball went harmlessly wide of the post.

With 15 minutes to go, Armstrong played a low ball across to Pattison on the penalty spot. The winger struck an effort at goal, but it was blocked well at his feet by Moult.

Less than 60 seconds later, the Robins could – and probably should – have been ahead once more.

Woolston dived to tip substitute Sean Miller’s curled shot onto the crossbar, which presented Harry Cain with a simple header to retake the lead. Showing a lot less composure than his England-playing namesake though, he headed the ball straight at the keeper – after Woolston had recovered well to get back to his feet after his initial save.

Blyth broke well from an Altrincham corner and Armstrong did very well to beat his man and get in down the right. Just as he had done three minutes earlier, the youngster tried to roll the ball back to Pattison but his pass was read well and intercepted by Moult.

Both sides were trying everything to claim the tie by this point and Richman fired a rasping effort at goal. However, Woolston produced an equally impressive save to parry the ball away.

Rivers played an inch-perfect ball into Reid with seven minutes left. The forward saw his strike saved well by Deasy, but the assistant had already flagged for offside.

The former Blackpool winger then took it upon himself to drive at goal just two minutes later – as he jinked his way into the Altrincham area. Unleashing the same stepovers that humbled Hartlepool United just over two years ago to the day, Rivers shot was then saved by the legs of Deasy.

With neither side able to successfully secure safe passage into Saturday’s First Round tie, Blyth will welcome Altrincham to Croft Park this weekend – in order to determine who host Vanarama National League side Macclesfield in the next round.