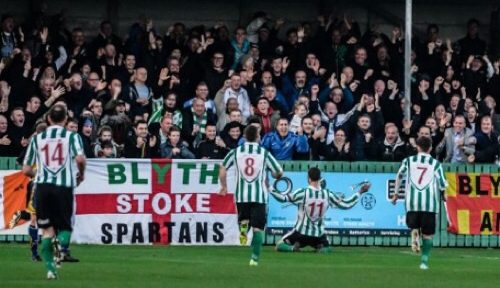 TEAM NEWS
Blyth will hope to continue their Buildbase FA Trophy campaign on Tuesday evening, when they make the trip to Altrincham. Hopefully, it will be third time lucky for Alun Armstrong’s men – following two previous postponements.

A battling Spartans performance on Saturday saw them gain a point at home to Buxton, despite playing more than 50 minutes with ten men – after Damon Mullen’s red card. Altrincham warmed up for the encounter with a defeat at home to Tamworth on Saturday, with the Robins’ goal coming from James Lawrie.

In the previous round, Blyth required some heroics from Matty Pattison to dispatch Halesowen, who were leading 3-2 before Pattison arrived from the bench to turn the game in Blyth’s favour.

Altrincham – by virtue of playing in the Vanarama National League North – enter the competition at this stage, but have a common connection with Spartans this season. Morpeth Town were drawn to face Altrincham in the FA Cup, after seeing off Blyth in the previous round.

Altrincham will hope for some relief from their wretched league form this season – as currently sit bottom of the National League North with only one win from their 18 games so far.

IN THE OPPOSITION DUGOUT
Jim Harvey – Appointed in September of this year, following the resignation of Neil Young, Harvey has plenty of experience both as a player and manager. His previous clubs include Arsenal and Tranmere as a player and manager of Morecambe and FC Halifax Town, amongst others. He has also been the assistant manager of the Northern Irish national side.

DANGER MAN
James Lawrie – Northern Irishman Lawrie is leading the goalscoring charts for the Robins this season from midfield. Coming through the youth system at Port Vale, James has been with Altrincham since August 2011.