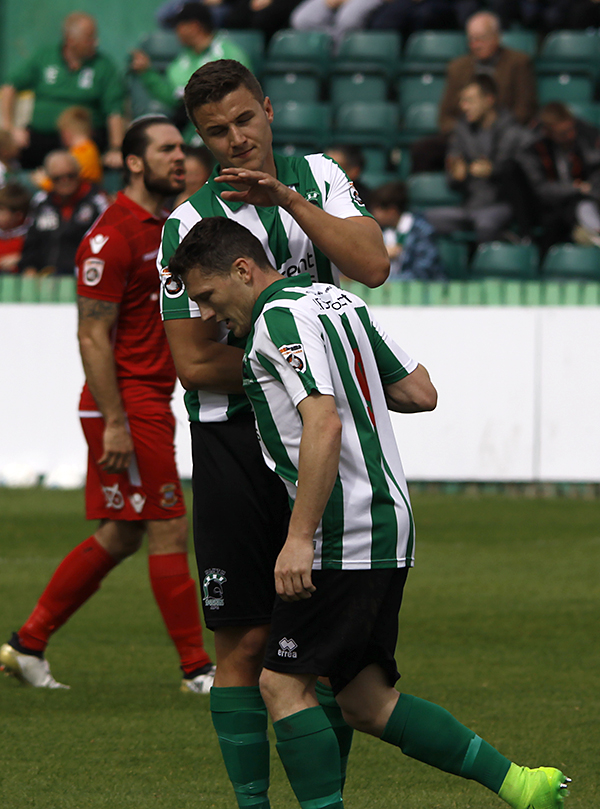 A game of two halves is a cliché often thrown around in football but it was a genuine case of it today as Blyth raced into a three goal lead at half time thanks to goals from Robbie Dale, Dan Maguire and Dale Hopson. However, AFC Telford United responded after the break with goals through Dinanga and Newby to make it a nervy finale.

Blyth started in the ascendency with Dale Hopson the first to try his luck on 6 minutes. David McTiernan found the former Whitby man 25yrds from goal. Hopson was allowed to turn with the ball and let fly with a rocket that Jas Singh in the AFC Telford goal made a meal off to get it behind.

AFC Telford responded with a chance of their own after 9 minutes. Jordan Lussey worked his way into some space on the corner of the 18yrd box. He curled an effort that was destined for the bottom corner but Peter Jameson was able to get down comfortably to deal with it.

The hosts had a fantastic opportunity to take the lead only a few minutes later as Anthony Dwyer turned and fired in a fizzing shot. Jameson was able to get down low to his right to tip the ball for a corner. It was a fantastic save that didn’t tell the story of what was to come.

Blyth raced down the other end of the pitch and after Jarrett Rivers whipped a delightful cross into the box it was met by the leaping, bearded figure of David McTiernan but his glancing header came back off the bar. Dan Maguire looked to seize on the rebound but was flagged for offside as the hosts breathed a sigh of relief.

On loan Burton Albion forward Marcus Dinanga was a thorn in the side of Spartans last season when he was at Matlock Town and he looked to repeat his performance. After 19 minutes he served notice off how dangerous he could be, turning away from Hutchinson in the box, the striker had the full goal to aim at but could only fire disappointingly into the waiting arms of Peter Jameson.

AFC Telford were forced into a tactical change as Aaron Simpson was forced off. He had landed badly on his back after only a matter of seconds but couldn’t continue and was replaced by the imposing figure of Aaron Hayden. The change required a change in formation as Hayden slotted in a centre back.

Jarrett Rivers was a constant source of danger for Blyth and was inches away from opening the scoring on 20 minutes. He jinked his way down the right before stepping inside and curling a left footed effort that narrowly missed the far post.

Spartans took the lead on 28 minutes, a corner routine saw the ball cut back for Lewis Horner who dummied it and fell to Robbie Dale who whipped the ball first time into the corner from 20yrds. It was a fantastic strike and left Jas Singh rooted to the spot as he turned and watched the ball nestle in the far corner.

The lead was doubled on 31 minutes as Dan Maguire slid the ball home. Hopson got away down the  flank and was able to fire a ball across the box that left the home defenders in limbo as to how to deal with the ball. Maguire was able to react first and prodded the ball home.

Maguire was involved again moments later as he chased a lost cause and won possession of the ball in the box. Aaron Hayden who had looked shaky since coming on early as a sub clumsily brought down Maguire and the referee had no hesitation in pointing to the spot. Dale Hopson stepped up and despite Singh guessing the right way was unable to get near the ball.

Some scintillating play almost led to a 4th on 38 minutes. Ian Watson and Dale combined well in their own defensive third to clear the ball up to Maguire. In turn the ball was fed to Hopson who ended the move trying to backheel the ball in but Singh managed to smother the opportunity.

The home fans and players were stunned by this 7 minute triple salvo by the visitors but tried to get themselves a foothold in the game. Newby showed great footwork in the box to work space for himself but his curling effort was weak and gathered by Jameson with ease.

The second half got underway with the hosts looking to salvage something from the game. John Marsden who had come on a replacement for Curtis Strong had the first effort of the second half but a strong block from Nathan Buddle stopped it from troubling Jameson.

Another familiar face to Spartans fans was Anthony Dwyer who on 51 minutes should have done better after breaking clear. Despite Nathan Buddle coming across to pressure the striker, he was still able to get an effort away that failed to seriously test Jameson.

Dwyer came even closer 5 minutes later as he hit the inside of the post. A corner was only cleared as far as Dwyer who took aim from 25yrds, it took slight deflection off the head of David McTiernan before hitting the post and bouncing away to safety.

There was another scare for Spartans on the hour mark. Dinanga powered his way into the box before taking aim from a tight angle. Jameson stood up well to block the initial effort, the rebound fell nicely for Dinanga who saw his second effort go into the side netting.

The hosts were got themselves back into the game on 64 minutes. A free kick was harshly awarded against Ian Watson and the full back was cautioned for his trouble. The kick was swung into the box and Dinanga was able to nod in at the near post.

The game started to swing from end to end. Jas Singh produced two terrific saves to keep AFC Telford in the game as Hopson and Dale both saw efforts blocked by the home custodian.

A nervy finale was ensured as AFC Telford pulled a second goal back on 78 minutes. Anthony Dwyer drove down the left and slid the ball across the goalmouth and the arriving Newby was able to stroke the ball home from 2 yards out.

Spartans responded well and had good chances to add to their tally. Once again though, Singh was able to make the saves and keep his side in the game. Hopson and Maguire saw their efforts blocked before Sean Reid his effort narrowly wide of the post.

As the game approached stoppage time, Hayden was moved forward as Telford chased an unlikely equaliser. The centre half found himself running clear and he showed good skill to take the ball round Jameson, unfortunately his next touch was horrific and it ran out of play.

AFC Telford were piling forward as the same approached its conclusion and Singh joined the attack for a final corner. The ball found its way to the back post where a Telford met it only to see the ball strike the post and then ricochet off the shins of Singh and into the arms of Jameson.

There was to be no further scares for the Spartans as they clung on to record their third successive victory and move up to 8th in the Vanarama National League North table.

Next up for Spartans is another away trip on Tuesday evening as they travel to face United of Manchester looking for a victory to climb into the play off positions.