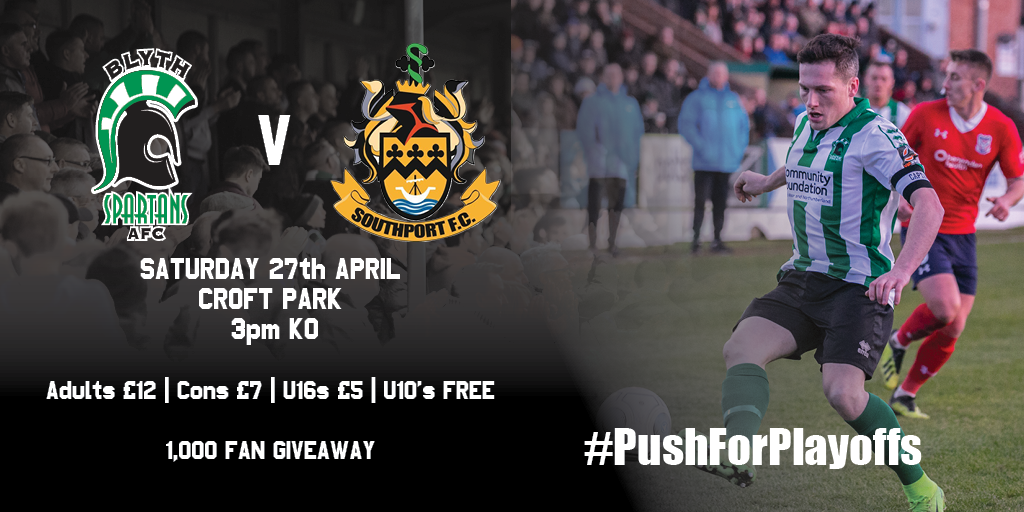 It’s the moment of reckoning for Blyth Spartans as we host Southport this afternoon knowing three points would secure a play-off berth.

Alun Armstrong’s side are currently sixth in the Vanarama National League North after Easter Monday’s late victory over FC United of Manchester.

Adam Wrightson’s 91st minute winner means that Spartans have their path to the paly-offs in their own hands – all they need to do is win.

Spartans could potentially secure a play-off spot even if they lose or draw. If either Bradford Park Avenue or AFC Telford United lose, Blyth will enter the playoffs for the first time.

Southport sit 13th in the National League North and Spartans will be looking to deny to Merseysiders a symmetry to their results.

After 41 league games this season they have won 13, drawn 14 and lost 14 matches – they also own a better away record than they do at their own Merseyrail Community Stadium.

They have won seven times away from home, lost eight and drawn five.

They picked up just eight points from their first 14 league games this campaign before turning the tide by going 12-games unbeaten including eight victories.

They’ve won just two of their last nine games in the National League North and have safety secured for another year.

This will be meeting number 13 between the two sides – and there has yet to be a draw.

Southport have seven victories to Spartans five to date – but since returning National League North Blyth have won three out of three without conceding a goal.

Hopefully that trend continues this afternoon.

Liam needs little introduction to Southport fans, being the most successful manager during the club’s non-league era with 336 games in charge.

League in an incredible 2011/12 season, breaking the club’s consecutive away wins record in the process. Liam has won the National League North as manager three times.

Dion weighed in with some crucial goals for Southport in 2017/18, having signed in January 2018 from Fleetwood. Dion can play on the left or right wing or as a number 10, he began his career in the youth academy at Blackpool, before joining AFC Fylde in 2014.

He’s netted 14 times in the league this season with three of those coming from the penalty spot.

Dan Maguire is one goal away from making it 160 for Blyth.

Jordan Watson is a games away from 150 appearances at the club.

Blyth Spartans can secure a play-off berth with a victory this afternoon or if they match or better the result of either Bradford Park Avenue or AFC Telfird United.