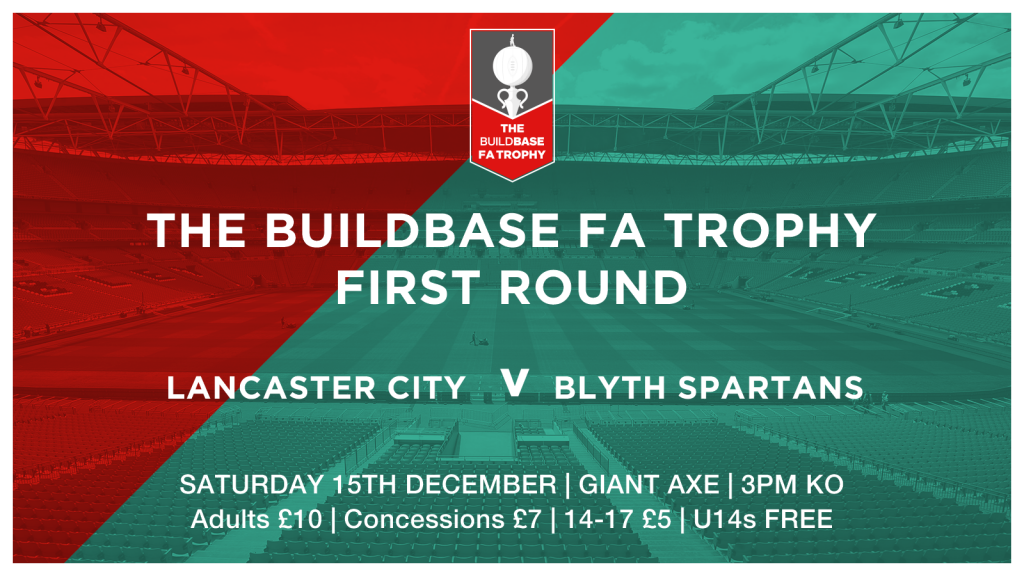 By Stuart Dick
Blyth Spartans return to Buildbase FA Trophy action when they travel across the Pennines this weekend to take on Lancaster City at the fantastically named Giant Axe.

Spartans defeated Marske United 4-1 to reach the first-round proper of the competition, whilst the Evo-Stik Premier League side have beaten Marine 2-0, Ossett United 1-0 and our fellow National League North side Guiseley AFC in a 2-1 replay win after a 2-2 draw in the original tie at Giant Axe.

Despite their league position, Lancaster have lost just one of their last seven games, and just three of their last 11. They have yet to score more than two goals in a fixture this season, and free-scoring Spartans will take solace in that fact.

The tale of the tape:
Lancaster and Spartans meet for the 23rd time, although the first game between the two organisations was when the hosts this weekend were named Lancaster Town in 1931 – six years before the club adopted their current guise. Spartans winning 3-0 in the FA Cup first round.

City dominated the early games in the series, winning seven, drawing four and losing just twice against Spartans before fortunes changed from 2002 onwards. Since a 4-2 defeat in 2001, Spartans have won six, drawn 2 and lost none of the last eight games.

Spartans have also won the only two FA cup competition meetings between the two sides – the aforementioned 3-0 win over Lancaster Town and a 4-2 win in 2002 over City, Pepper, McMahon (2) and Robson on target.

The Manager:
Mark Fell joined the club in October after he resigned from his role at Ramsbottam United, and since he has joined the club’s results have turned around, with only three defeats under his tenure.

The Key Man:
Robert Wilson has netted six goals since the middle of October and is the club’s top goal scorer this campaign, netting two penalties in his six.
Rob is no stranger to the Dolly Blues as he was once a part of the set up at Giant Axe.
Other than Lancaster City, Wilson played for Workington AFC, AFC Fylde, Kendal Town and recently, American side, Cincinnati Dutch Lions.