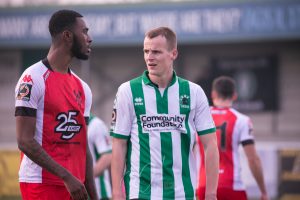 Kieran Green says Blyth Spartans will continue to take it one game at a time after a 2-0 win over Guiseley maintained their National League North playoff push.

Alun Armstrong’s men moved into the top seven on goal difference courtesy of goals from Green and Nathan Buddle, with close rivals AFC Telford United in action this afternoon (3pm) at Hereford.

As well as getting on the scoresheet, Green produced a tireless display in midfield against a physical Guiseley, where he was selected as the Sponsors’ Man of the Match.

And while he was pleased to collect the MOTM award, Green was quick to heap praise on his defence after recording a second successive clean sheet.

“It was nice to get the award but it was all about the result – it was a great one,” said the former Gateshead man.

“Guiseley are a fit side; they have strong players. It was tough, they’ve got some big lads, and when they resorted to lumping it, it was always going to be a battle.

“I thought the lads at the back were outstanding and they won us the game really.”

Green handed Spartans the lead after 12 minutes when Dan Maguire unselfishly teed up the midfielder to tap home from inside the six-yard box after a defensive mix-up by the visitors.

Green conceded that it wasn’t the prettiest of performances for the 915 in attendance to witness, however, the focus was the three points, which he admits perhaps had an effect of Blyth’s usual expressive style.

He said: “We started well but it was a tough pitch.

“It was a bit dry but we knew if we didn’t concede we win the game – so maybe that’s when you stop taking risks when you go 1-0 up.

“I think when you get in front, especially with the playoffs, it was in my head that if we don’t concede we win the game and then it’s three points closer to the playoffs.”

Buddle’s header with one-minute of normal time remaining wrapped up the win for Armstrong’s side – and propelled them into the playoff spots for at least 24 hours.

Green said: “It was a cracker at the end by Budds!

“He wasn’t actually going to go up for the corner – but he’s asked the gaffer and obviously scored a very important goal.

“In fairness to him, he does turn out and score every now and again.”

With a trip to FC United of Manchester on Monday before rounding off the season at home to Southport on Saturday, Green says Blyth will take it one game at a time with the playoffs an extreme possibility.

He said: “The thing about the performance that was good was when it wasn’t going our way on the ball and we weren’t doing nice things we like to do – we all dug in and grafted well.

“We’re doing what the gaffer says, all we can do is take one game at a time, try and outwork the other team and play our stuff.”