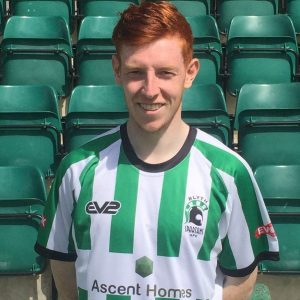 Blyth Spartans can confirm that Michael Richardson has left the club – after completing a transfer to Northern League side South Shields for an undisclosed fee.

Joining the club in the summer of 2014, the 24-year-old has made over 100 appearances for Blyth and was part of the 2014/15 Senior Cup-winning side that also reached the Emirates FA Cup Third Round in the same season.

However, the former Newcastle United youngster has found himself down the pecking order since Alun Armstrong’s arrival and has had to make most of his appearances under the current Spartans boss from the bench.

Armstrong said: “They’ve been chasing him for a while and I got an offer. I told them what I thought Michael’s value was, they matched it and I gave the option to Michael.

“I told him that I wanted him to stay as he was part of the squad but that he should go and have a chat with them. He’s come back and said that he wants to leave.

“If you look at the way I’ve probably used him, he’s been coming off the bench mostly – as I couldn’t seem to find his best position. He’s more of a number ten and, looking at the way I’m setting the lads up, we haven’t really got a number ten role as such and I think that’s probably what’s made his mind up.

“I didn’t want to lose him, but that’s part and parcel of football. If someone comes in and matches your valuation of the player, then you can’t do anything about it really.”

The club would like to thank the midfielder for all of his efforts during his time at Croft Park and wish him well for the future.