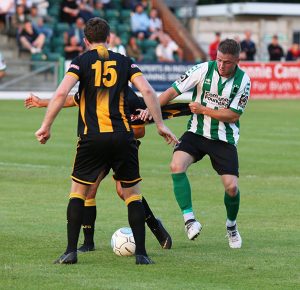 Blyth Spartans’ latest signing, Craig Spooner, spoke of his delight to ‘get out there’ and play at Croft Park in front of the Spartans fans this week against Morpeth Town.

Despite losing 4-2 and three of the goals coming from set-pieces Spooner was upbeat about what was to come from himself and the team.

The ex-Newcastle United product admits the fans were ‘fantastic’ despite seeing their side succumb to their first defeat under Lee Clark.

The midfielder spoke about what it was like to play his first game at his new home pitch.

He said: “Fantastic I thought the fans were great, I thought we were a bit unlucky to get beat off three set plays and a goal late on but it was really good to get out there.”

Spooner was dominant in the midfielder starting up attacks and switching Spartans from defence to attack efficiently and he admitted getting more minutes is the key to improving.

Clark has changed the way Spartans have played compared to last season and Spooner believes the ex-Newcastle player has helped him adapt his game already.

Spooner said: “Yeah definitely, when I first came in I had a lot to learn and I think he’s helped a lot with my positional side of the game playing in the centre midfield role.”

With three pre-season friendly games remaining for Clark’s side, Spooner believes it has been a good time for the players to get used to each other and prepare for the season ahead.

Spooner spoke about pre-season: “Really good everyone is enjoying pre-season we’ve been playing a lot of games and a lot of small-sided games in training to try and get us ready for the season ahead.”