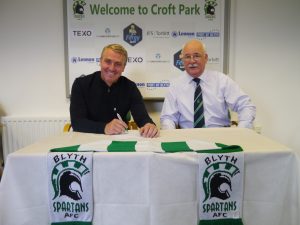 “First and foremost, it’s football – I love it, I want to be on the grass,” said Blyth Spartans’ new manager.

“I’ve been too long out the game and an opportunity to be at home around my family at a great club with great tradition. When they contacted me and I was honoured.”

Blyth have called a press conference at Croft Park at 3pm on Monday. To apply for a press pass, please email Media Manager Stuart Dick at stuart@sdjournalism.co.uk.

The news was welcomed by new club sponsor Texo, we’ll be making a further announcement on the details of our new sponsorship deal this coming Monday.