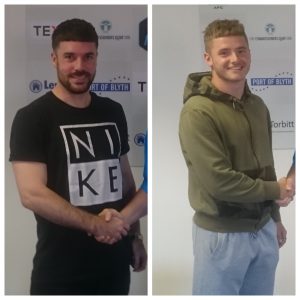 With four pre-season games completed, Lee Clark has moved swiftly to add yet more talent to his squad with midfielders Damen Mullen and Craig Spooner signing for the 2019/20 season.

Mullen, 30, is no stranger to Croft Park having played for a number of years, surpassing 200 appearances for the club and was a vital cog in last season play-off contending side:

“It’s been a long summer,” said Mullen on signing the new deal, “obviously was a bit up and down at the end of the season, but good to get it sorted now.

“I’ve missed the first couple of weeks of pre-season, to be fair my wife has just had our first child, hence I’ve come in a bit later than I expected.

Mullen lauded the signings Lee Clark has made this summer, and is impressed with the calibre of talent at the club:

“There is a lot of young lads in the dressing room, loads of energy in the side and pace, there is no point on dwelling on what happened, we’ve got a new team,

“It’s a new start and we’ve just got to get going into the new season.

“Delighted he’s signed a new contract with us, he’s had a few things to sort out in recent weeks, he’ll be an important signing for us.”

And after a successful trial with the club, Clark has also secured the services of Craig Spooner – a former Newcastle United product who played his football at North Shields last season.

The talented midfielder has impressed in the pre-season games – scoring a stunning goal in the 3-1 win over Stranraer – and Clark has worked quickly to ensure he’ll be at Croft Park this season.