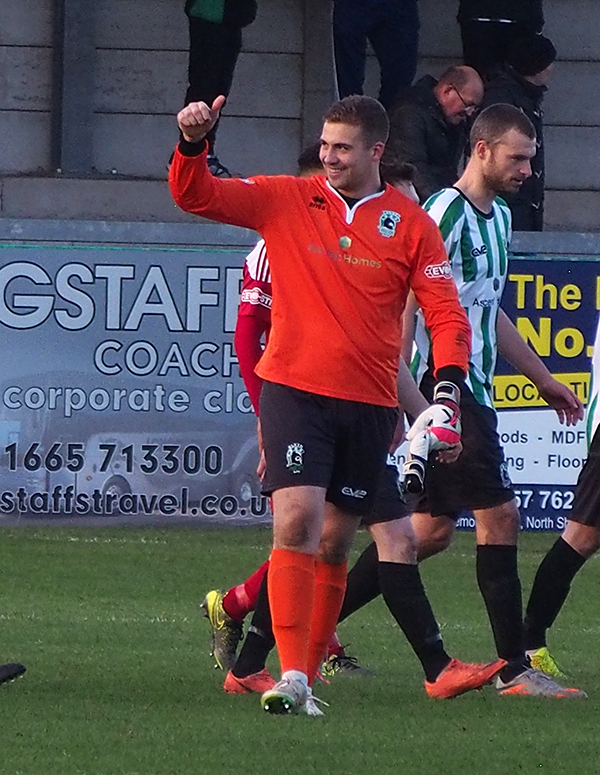 Alun Armstrong has revealed that he believed Adam McHugh would save his second last-minute penalty of this season during Saturday’s 2-1 win – as the Blyth Spartans keeper denied Stourbridge an equaliser with the last kick of the game.

Blyth had raced to a 2-0 lead just after the half-hour mark, thanks to Nathan Buddle’s header and a deflected drive from Robert Dale, but Luke Benbow dragged Stourbridge back into the Evo-Stik Premier League clash with a sublime rocket across goal.

The dominant Glassmen were awarded a lifeline when Michael Richardson handled in the area from a corner in added time at the end of the game. Benbow stepped up and drilled his spot-kick down the middle, but McHugh was able to save the ball with his legs and maintain his run of penalty heroics.

McHugh has saved each of the last four penalties he has faced and – after producing four saves out of five spot-kicks in a Spartans shirt – his manager revealed that he had no doubt that the goalkeeper would deny Benbow a second goal.

Armstrong said: “I didn’t think we were going to concede, if I’m honest with you. Adam was standing there and I thought he would save it – as it’s just got to that point now that you fancy Adam to save a penalty.

“That’s a great position to be in as a goalkeeper. He’s got a great record and you look at it now, people will have it in their minds – if they get a penalty against us – that he’s saved his last four penalties, so that’s great for him and us.

“Fair play to the kid, he’s took his chance. I’m chuffed to bits for him and he’s getting his rewards.

“I probably do still need to get someone in to help him – as we don’t have a goalkeeping coach – and I’m working on that, because he needs some help on that side. He’s been in brilliant form for us recently though.” 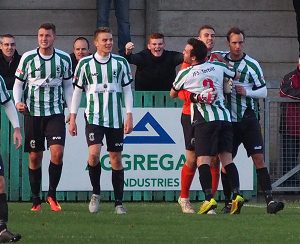 Confused looks spread around Croft Park in the last of four stoppage time minutes, when referee J Matthews blew his whistle after a Stourbridge corner had already been taken. Michael Richardson appeared to believe the ball was dead and hit it with his hand, but the official pointed to the spot instead.

Armstrong too was bemused by the eventful end to the contest, but revealed that he spoke to the referee after the game about the incident and the referee’s decision.

The 41-year-old added: “If I’m honest with you, I couldn’t understand what was happening. I’ve seen the ball come in, their keeper looks like he’s gone to catch it and Michael’s stuck his hand up and hit it.

“Then, I’m thinking ‘What’s happened? The ref must have blew his whistle’. The lads have said that he blew the whistle after the ball was kicked, hence why Michael’s hit it away.

“In fairness, he should have just headed it or kicked it away as far as he could, but the referee pulled me in after the game and we discussed it. I don’t think he realised that the corner had already been taken when he blew his whistle, but that could have cost us two points.

“I think it would have been unjust if we had came away with a draw, because I thought our first half performance was really good. Yes, they did get back into the game, but I think what we did in the first half should have merited us going further ahead and winning the game before the break.”

Despite hanging on at the end, Blyth had been much the better side in the first half – as they went in two goals to the good at the break. Armstrong was delighted to see the lads turn it on for the first half, but had a feeling that Stourbridge would sneak back into it in the second half.

Armstrong said: “I thought we were fantastic in the first half – as the lads did everything that we asked of them. We were on the front foot and could have been three, four or even five nil up at half-time.

“You could sense in the changing room that they were thinking ‘What if we concede?’ and I told them that the next goal was all important and that we had to make sure it was us that got it.

“We started playing too direct, by just hitting the ball up to Nipa and Luke when they were 40 yards away from everyone else and we couldn’t get the midfield up quick enough to support them. We dropped off a little too deep and we tried to fix that a bit at half-time.

“The two lads up top were in for a tough afternoon – as they just chased the ball for 90 minutes and, when they got it, there was no one there to support them in the second half. That resulted in them winning possession and hitting us with the direct ball, which allowed them to get in.”

Armstrong’s side managed to record three clean sheets in his first four games in charge, but Spartans have conceded in each of their last three matches – albeit taking the maximum nine points available from them. Armstrong admits that both he and new joint assistant manager Darren Holloway will work on the defensive side, but had nothing but praise for his players’ efforts against the Glassmen.

He said: “Me and Daz have had a chat and there’s a lot of work to be done defensively, regarding positional play.

“I couldn’t fault the lads’ effort though. Some of the lads looked like they were dying out there and, if I could have made five subs then I would have – as the lads ran their socks off.

“You’ve got to look at them and they’ve done fantastically well in the last five games, considering some of the journeys we’ve had to make. We’ve gone unbeaten in the last five, drawing one and winning four.

“I can’t ask any more of them – as they’ve been outstanding. Long may it continue!”

Having watched his side exhaust themselves battling over the winning line on Saturday, the Spartans manager now has a full week to prepare for Blyth’s next match – as they begin their Buildbase FA Trophy campaign in Yorkshire. Armstrong admits that he wants to win the game, but suggested that his team selection might see some rotation – in order to keep his players fresh for the club’s league commitments.

Armstrong revealed: “We’ve got Goole in the FA Trophy on Saturday and that’s one that we want to try and win as well. However, there will be some changes – as I have to look after the lads and be fair to them.

“I need to make sure we’re ready for the league game on the Tuesday after though, so I’ll speak to the lads personally and see how they feel about needing a rest or not. We need to carefully balance them, but we want to win the game as well.

“I’ve got to be fair to the other lads that haven’t been playing – as there’s some that I’m still yet to see play much yet. It’s difficult to get into a winning team, but I could see in the final stages against Stourbridge that there are some fatigued legs in there and I need to make a couple of changes for Saturday.”