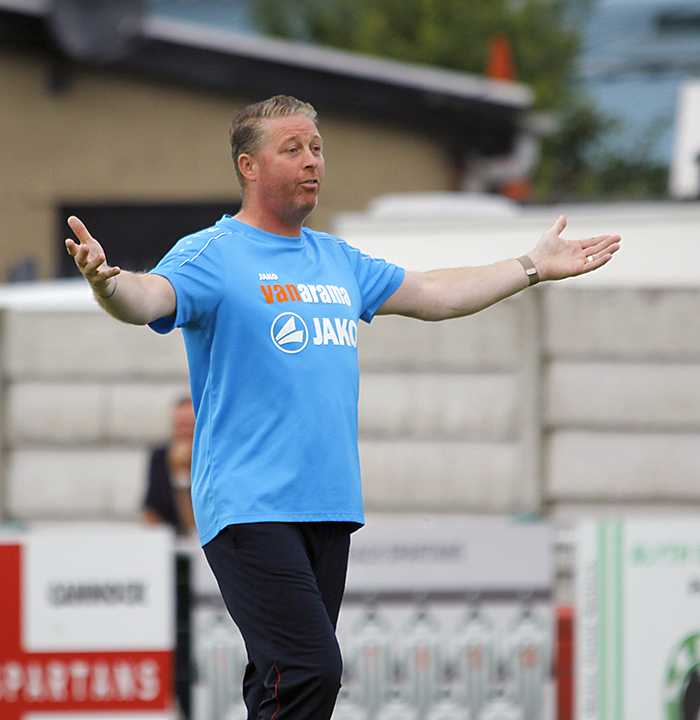 Alun Armstrong was in a jubilant mood yesterday evening after goals from Sean Reid and Jarrett Rivers secured Spartans’ second win of the season against a very competitive Altrincham side.

Reid and Lewis Horner combined to give the hosts a 25th minute lead, which was cancelled out by Josh Hancocks tidy finish within 60 second.

Rivers became the hero on 82 minutes when he rifled the ball into the roof of the net through a sea of bodies – after a beautifully floated cross by Dan Maguire.

“Today was a must win for us,” admitted Armstrong moments after the final whistle, “Our performances over the last two games deserved something, and unfortunately we came away with nothing.”

“It was a different story this afternoon, we were nowhere near out best, especially in the first half – but we’ve got three points on the board and that is all that matters.”

Spartans came into the game on the back of a 2-1 defeat at the hands of league leaders Chorley, and a contentious 2-0 defeat to York City on Monday afternoon.

But it could have been so different, with Altrincham dominating the opening half an hour.

“I was fuming,” exclaimed the 43-year-old manager, “It looked like we had packed in after two hard to take defeats – I was really annoyed with our first half display and at half time we got into them and said things had to chance – and to be fair, we got the reaction we wanted.”

Reid’s first half finish ended a memorising move, but Armstrong laughed when it was suggested the attacking midfielder – who played his 149th game for Spartans – meant his effort.

“Not in a million years has Reidy meant that, he’s tried to control in and we’ve got the first bit of luck we’ve had in a while.”

“But it was the move that impressed me. It’s the first time we’d moved the ball quickly through the middle with one touch passing and some combinations – Horner and Reid worked the opening fantastically.”

And Armstrong praised his goalscorers work ethic for the team – having spent the last two games at centre-half.

“He played well in those two games – but we lost both. When he plays centre-half we don’t win. It shows his importance in the middle of the field, he’s a massive presence for us going forward.”

As happy as the former Middlesbrough striker was about the first goal, he was as equally disgusted with the equaliser 60 second later.

“It was simply embarrassing, every one stood back and watched the goal happen, I was fuming at that.”

After Spartans took the lead in the final ten minutes, Tom Peers missed a golden chance to level when he skied an effort from three yards out – after Pete Jameson parried the ball straight to him from a routine save.

“My heart was in my mouth, they way Pete is playing you never expect him to do that. We got away with one there, but once again we’ve deserved a bit of luck.”

“It also shows we need to learn to play the ‘what ifs’ better, our lads saw the free-kick go in and though ‘Pete’s got that.’ 99% of the time he has, but we need to be prepared for the one time that he hasn’t – and it’s not just in those situations, it’s all over the park.”

But all in all, Armstrong was happy with the result, even if the method of getting it wasn’t pleasing on the eye.