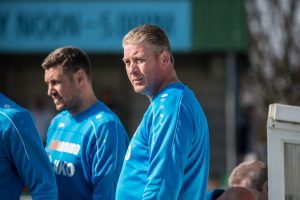 The excellent 289 Blyth fans were dealt a cruel blow in the 84th-minute as Jamie Turley headed home a Leyton Orient winner,  preventing a FA Trophy last 16 replay at Croft Park on Tuesday.

The away supporters out-sang the Orient-faithful throughout the afternoon before passionately showing their appreciation for their side’s superb efforts at the full-time whistle.

“They were brilliant and I was more gutted for them because it would have been great to get Orient back to Croft Park – imagine the noise we would have got there!

“They’ve came such a long way and they haven’t stopped singing all game.

“You can see what that does for our lads, so we’ve got to make sure we can get that at home.”

Playing at the home of a former Football League club, against the National League leaders, in front of a 1800+ crowd – Armstrong believes it shows how far the club has come since his arrival in 2016.

He said: “It was devastating to lose in the way we did but we’ll take massive satisfaction from what we done today.

“I’m so proud of the players, the fans and the club – it’s in a good place at the minute.”

“We’ve come on leaps and bounds in the two-and-half-years I’ve been here and I don’t want it to stop but sometimes you just have to take stock – realise what we are – realise where we are – and just enjoy the games.”