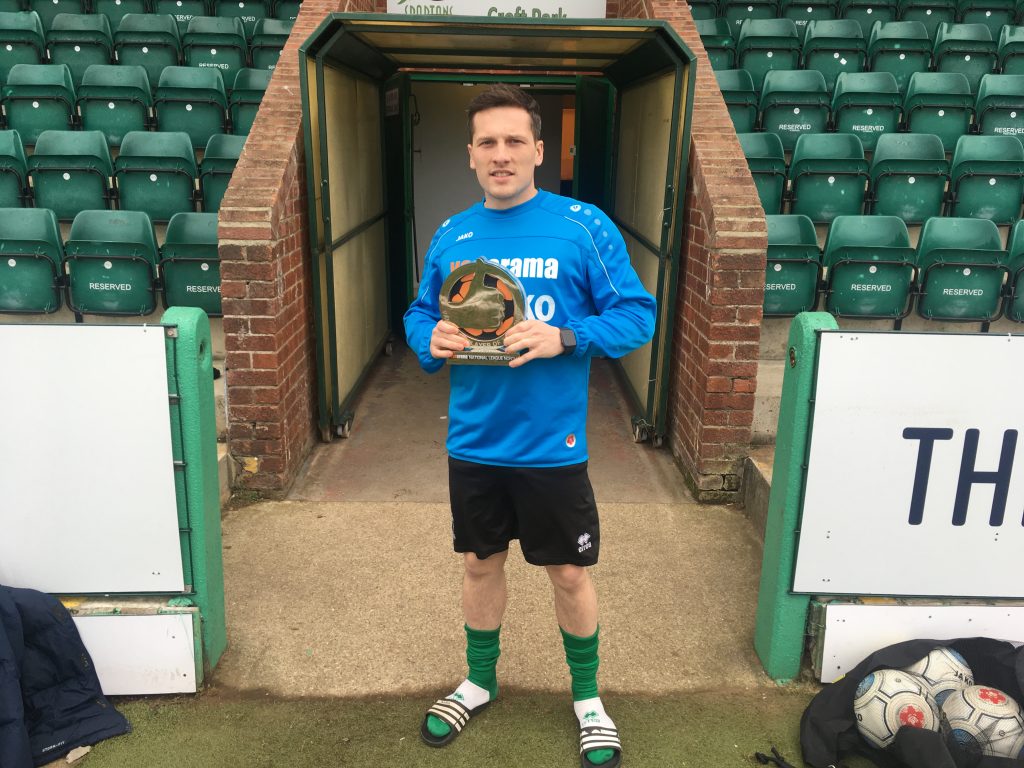 Prolific striker Dan Maguire’s has been awarded the Vanarama National League North Player of the month award just two days after he netted his 150th goal in a green and white shirt, lifting Spartans over National League Boreham Wood on Saturday afternoon.

“I’m delighted,” said Maguire on receiving the award, “I’ve been playing well as of late and I just hope I can keep scoring the remainder of the season.”

‘Nipa’ has reached the 150 goal milestone in just 291 appearances for Spartans, scoring at a phenomenal rate of more than a goal every two games.

Since signing from Seaton Delaval in 2012 – and making his debut against Witton Albion in September of that year – Maguire has been the lynchpin of a front line that has year on year been one of the most potent in non-league football.

“It was a big chance for me when I signed back then, I’m just happy I’ve been able to contribute over the years.

“I never imagined scoring 150 goals for Blyth, but I’ve had the chance to play with some fantastic players who make my job easier.”

Forming a formidable partnerships with forwards and midfielders the likes of Robert Dale, Sean Reid, Jarrett Rivers – and previously players the calibre of Luke Armstrong, Paul Robinson and Stephen Turnbull – ‘Nipa’ has always had excellent service.

“I just try and work hard and do my best for the team. Whether it’s me scoring or someone else, the most important thing is we are winning games, which we have done a lot of over the past few years.”

The current 9, 10 and 11 for Blyth Spartans have amassed 413 goals between the them, and Maguire hopes there is plenty more to come from the trio.

“I love playing with Robbie and Reidy, we all complement each other well. Robbie’s just a legend, he’s capable of things no one else at this level is – and Reidy is relentless up and down the field.

“Those two, plus likes of Jarrett, Jamie (Holmes), Connor (Oliver) – the entire team in fact – it’s a team that’s full of players who create chances, makes my job a lot easier.”