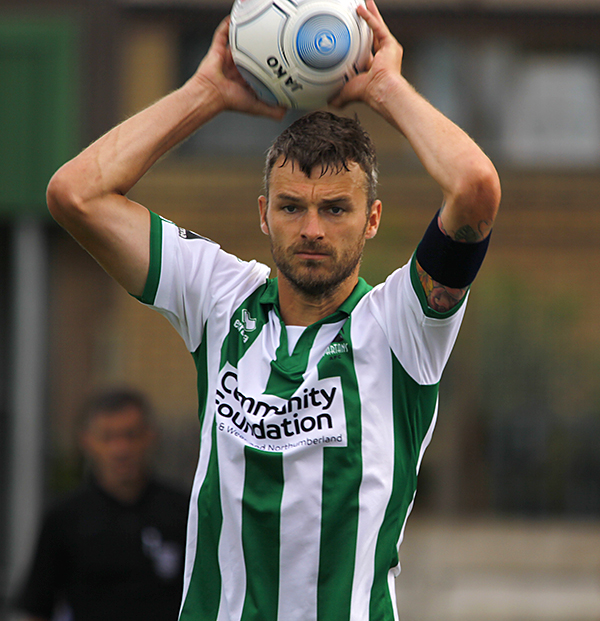 Blyth Spartans were defeated 2-1 by league leaders Chorley in what was a fiesty affair, with the visitors reduced to 10-men when substitute Courtney Meppen-Walter was sent off.

Chorley opened the scoring in the 66th minute when Watson brought down Elliott Newby in the box and a penalty was given. Alex Newby put the penalty away.

Chorley scored again five minutes later as Newby flicked on a header for  Josh Wilson to chase, Wilson then sent a thunderous strike into the top left hand corner of the Blyth goal.

In the 75th minute, Meppen-Walter fouled Dale inside the box receiving his second yellow of the game. Dale then stepped up to take it and scored but it was only a consolation goal in the end although it did end Chorley’s record of not conceding this season.

The visitors started off strong in the opening minutes as Wilson had a weak volley from outside easily saved by Jameson in the 3rd minute.

Blyth managed to get themselves back into the game. In the 7th minute, Maguire capitalised on a misplaced pass and charged towards goal then having a shot across goal saved by a diving Urwin.

Chorley could’ve been down to 10 men when in the 19th minute of the match, Wilson went into a challenge high on a Blyth player but the referee only brandished a yellow.

Robbie Dale caused the visitors problems in the first half as Blyth began to dominate the match. Dale whipped a cross into the box that was headed wide by Green. Two minutes later, Dale had a shot deflected just over the bar and from the resulting corner managed to get a shot that curved narrowly wide.

Blyth continued to put the pressure on the league leaders as Maguire managed to muscle off the defenders and get a shot away which went straight at the Chorley keeper.

Chorley had a chance at goal as Wilson managed to a shot away but it was cleared off the line by Reid. Chorley slowly got back into the match as Carver forced Jameson to make a diving save.

Towards the end of the first half, Blyth had chances to open the scoring as Rivers launched a cross into the box with Buddle getting his head on the ball to send towards goal but it just needed a extra touch to put it into the net but no one was there to provide one. Watson had a audacious effort from long range that was saved easily by Urwin in the last minute of the first half.

Chorley started the second half well with a shot by Carver saved by an impressive save from a charging Jameson.

Chances were few and far between in the second half but Dale managed to get a shot away when he cut in onto his right foot and had a shot at goal that was easily saved by Urwin.

Chorley then had an opportunity as the ball bobbled between Wilson and Carver in the Blyth box but Jameson managed to jump on the ball.

Chorley were given a penalty when Watson brought down Elliot Newby in the box. Alex Newby stepped up to take the penalty and hammered in.

Just a few minutes later, Newby headed the ball on for Wilson to get and he hit a thunderous strike that went into the far corner of that goal to make it 2-0 to Chorley.

Chorley continued to put pressure on Blyth as Wilson managed to score a goal after first hitting his shot against the post but he was offside.

It was a heated game and things finally boiled over when Meppen-Walter brought down Dale to concede a penalty and was shown his second yellow card. Dale then went and took the penalty, hammering it home to give Blyth a chance of rescuing a point.

Blyth pushed hard in the closing minutes of the match trying to get that crucial equaliser. Reid had a great shot inside the box saved impressively by Urwin. While Dale had a shot at the near post also denied by Urwin in the first minute of stoppage time. Ardelean had a last chance of the game as Dale sent in a cross and Ardelean headed just wide.

Blyth can take away the fact that they managed to the first goal against Chorley this season in what was always going to be a challenging game against the league leaders.

Blyth’s attention turns to York as they travel there on Monday in what could be York’s first game with a new manager.

Subs not used: Fewster (injured in the warm-up), Skirpan (GK)

Man of the Match – Dan Maguire