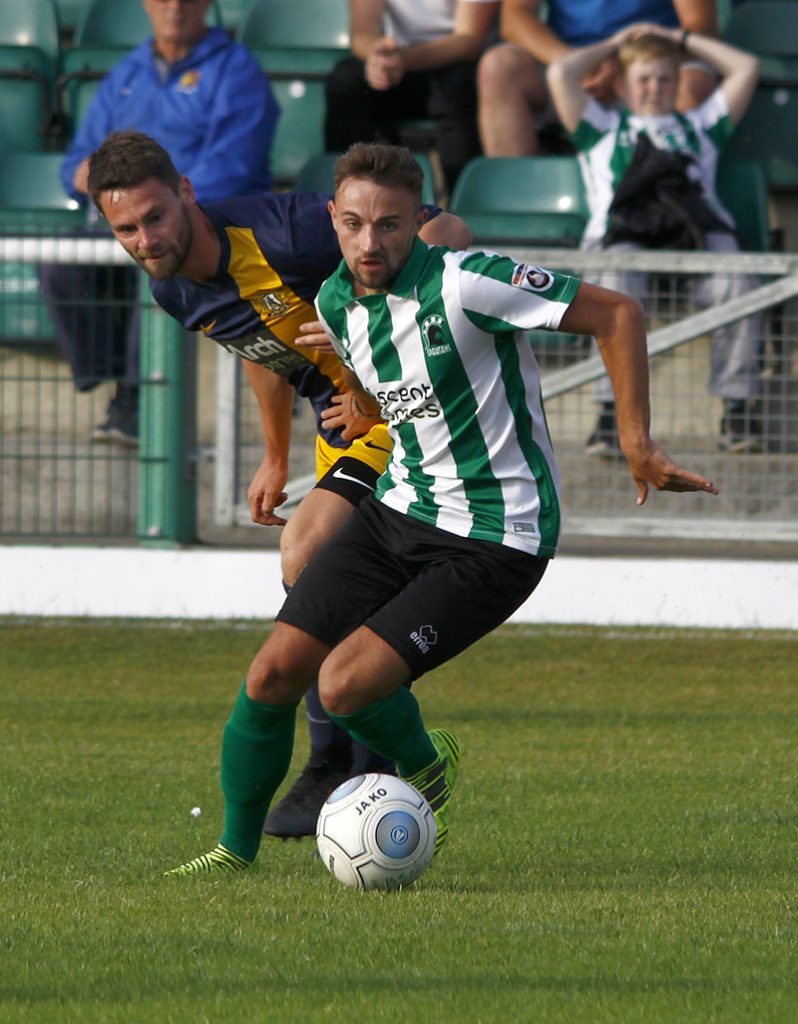 The former South Shields forward came off the bench to score a penalty and tap home after a stunning Jarrett Rivers run and cross to secure all three points for Blyth.

Sean Reid and Dan Maguire’s wonder-strike had given the visitors a two-goal lead before the Magpies responded through Josh O’Keefe in first-half added time and Elliott Newby before Holmes took centre stage.

And it was high flying Chorley who dominated the opening half an hour, Marcus Carver taking aim from inside the penalty area, Jameson equal to the challenge with five minutes played.

On 12 minutes the hosts thought they had took the lead. Adam Blakeman’s corner was steered goal wards by Stephen Jordan, but Lewis Horner was on hand to clear the ball off the line.

Chorley forced Jameson into two vital stops just after the half hour mark. First he denied a strike from Carver with his legs before turning away a Wilson header.

A moment later Teague headed another Blakeman set-piece wide at the back post, when it was easier to score.

Spartans took the lead on 38 minutes after a simple long ball by Jameson saw Maguire round Eccles in the Magpies goal – the ‘keeper making his full debut bundling the forward over.

Sean Reid stepped up, rolling the ball to the keeper’s left, sending Eccles the wrong way.

Six minutes later, Maguire produced a moment of magic. Picking up the ball on the left hand side, he found space on the edge of the area before lofting and effort over the despairing dive of Eccles into the top right hand corner.

But in first half added time, O’Keefe gave the Magpies a lifeline. Teague floated in a cross from the right which was met by O’Keefe at the back post, the midfielder heading across goal to reduce arrears.

The sucker punch seemed to rejuvenate the visitors, as they controlled the game after the break, but suffered a second sucker punch ten minutes into the second half.

Blakeman rolled a right wing corner to the edge of area, meeting Elliot Newby in stride who lashed the ball past Jameson to level proceedings.

Spartans recovered well as both sides looked to garner control of the game, but the game turned when Armstrong introduced Rivers and Holmes in the 68th minute.

Six minutes later, Maguire once again was hauled down in the penalty area, this time Jordan the culprit. Holmes stepped up and rolled the ball into the side-netting, the perfect penalty to restore Spartans lead.

Seven minutes from time, Spartans regained their two-goal advantage thanks to a spectacular run my Rivers. Picking the ball up on the right, Rivers danced and dribbled his way past four defenders before finding Holmes 10 yards from goal – the winger making no mistake.

Spartans should have been awarded another penalty two minutes before the end, Holmes galloping clear was clipped down by Baines. The referee inexplicably booked Holmes for simulation, despite the defender saying after the game that he did catch him.