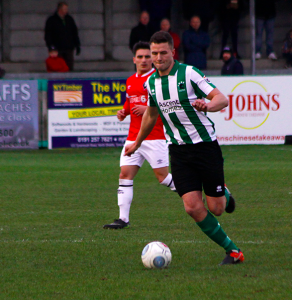 Blyth Spartans fell victim to a contentious penalty decision as they slipped out of the National League North play-offs following a third consecutive defeat.

The score was tied at 1-1 after Nick Haughton’s goal on the brink of half-time for Salford cancelled out Sean Reid’s 20th-minute opener.

However, after a first-half seemingly set up a pulsating second, linesman James O’Connor awarded a penalty after Nathan Buddle’s clean challenge on Mani Dieseruvwe was deemed as a foul.

Blyth boss Alun Armstrong was sent to the stands for his protests as Tom Walker dispatched the penalty to the disbelief of the Spartans management, players, officials and supporters.

And with Blyth continuing to feel aggrieved, the Ammies took advantage with a second goal from Haughton and a Liam Hogan header wrapping up the win.

Armstrong made two changes to the Spartans side that lost 1-0 at North Ferriby United on Saturday. Michael Liddle and Damen Mullen came in for Dan Maguire and Ian Watson.

Salford, on the back of an extraordinary comeback from 4-0 down at Kidderminster Harriers, made an expected bright start.

While the Ammies struggled to create any clear-cut chances, Haughton was making the most noise from his number 10 position with his two attempts failing to trouble Peter Jameson.

But with the pace of Jarrett Rivers on the left side, Blyth caught the hosts’ defence napping, with their first opportunity resulting in the opener on 20 minutes.

Rivers’ cross was only half cleared into the path of Reid, who slid the ball past keeper Tim Erlandsson.

The Ammies searched for an instant leveller with Haughton again on the end of it, although failed to beat Jameson again with a tame effort.

Salford continued to press for an equaliser right up until the half-time as only the head of Buddle on the half-hour mark prevented Dieseruvwe from heading home.

Spartans, overall, restricted the hosts to half chances but were undone on the brink of the break as Haughton aimed his shot into the bottom left-hand corner – beating Jameson at the fifth attempt.

In the second-half, the game quickly turned on Spartans following a contentious penalty decision awarded by the linesman.

Buddle clearly looked to have made an inch-perfect tackle to dispossess Dieseruvwe, however, the official thought otherwise and flagged for a spot-kick to the disbelief of the Spartans officials, who had a clear view of it.

Armstrong’s protests seen him sent to the stands, and had to watch Walker convert with Jameson unable to recover some justice.

Though, for all of Blyth’s obvious frustrations, Dale Hopson missed a gaping opportunity to level the scores as he raced through on goal, only to aim his shot wide with the goalkeeper beaten.

Hopson’s chance would be the last time Spartans got anywhere near their opponents as the Ammies found a quick-fire double to clinch the win by the hour-mark.

Haughton added his second of the game after tapping home Walker’s low cross before Hogan’s deflected header trickled past the helpless Jameson.