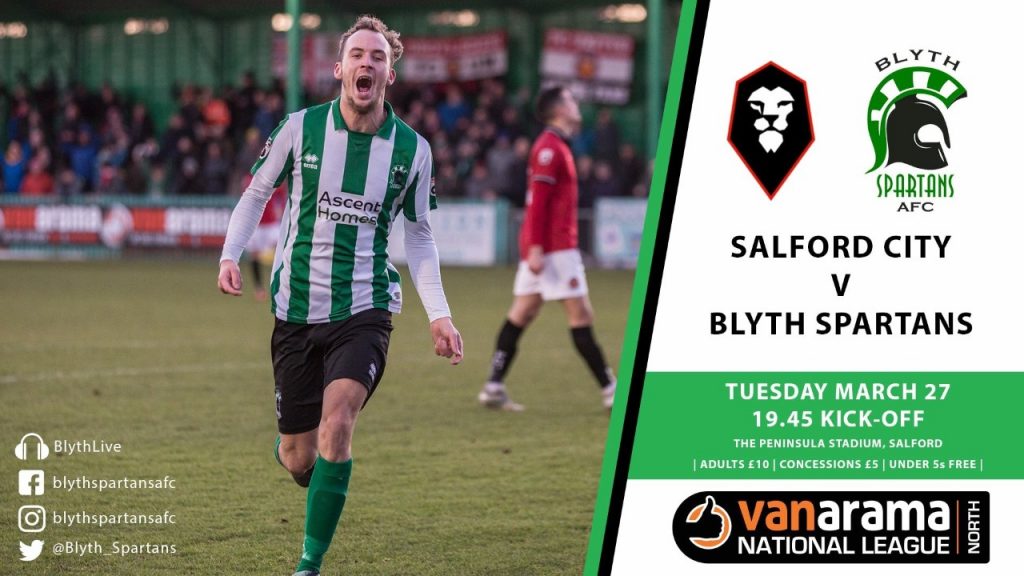 On Tuesday, the Spartans travel to the league leaders Salford City in a crucial match for both sides.

Following recent postponements, Blyth made the trip to North Ferriby United on Saturday but were disappointed to come away with no points. Jordon Cooke grabbed the only goal of the game as he nodded home a free kick on the hour mark. The Villagers ‘keeper, Durrant was man of the match as he produced a string of saves to deny Spartans.

Salford were involved in a titanic tussle as they fought back from four goals down to snatch a dramatic point away to Kidderminster Harriers on Saturday. Sonupé, Ironside, Vaughan and Bradley had put the Harriers four goals up after 57 minutes. However, Josh Askew scored in the 80th minute before Nick Haughton grabbed a 2nd in the 89th minute. The dram wasn’t finished there as Mani Dieseruvwe and Tom Walker scored in injury time to rtescue a point.

Salford currently sit top of the table, one point clear of Harrogate Town, although Harrogate do enjoy a game in hand and a superior goal difference. A win for the Spartans would see them jump to fourth, overtaking York and Kidderminster.