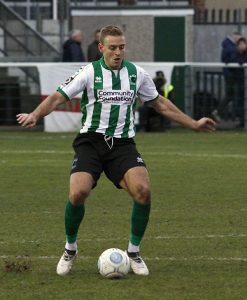 Spartans were six minutes away from setting up a replay with The O’s on Tuesday evening before Jamie Turley inflicted a cruel blow on Alun Armstrong’s men.

It came in front of the excellent 289-strong travelling supporters at the Breyer Group Stadium, who showed their appreciation for Blyth’s tireless efforts at the full-time whistle.

“It’s disappointing, it’s not what we deserved,” said Laing, after completing his second consecutive full game.

“We did well through all of the game – I thought we matched them everywhere. We got the formation right. It was just one of them things.

“Sometimes it happens in football. All the lads are obviously very disappointed but we can take the positives from it and take them into next week.”

Orient, who were only relegated from the Football League in 2017, are on course to return – occupying top spot with a three-point lead over close chasers Salford City and Solihull Moors.

Just four seasons ago, the margins between the two clubs were far greater with Blyth competing in the Evo-Stik Premier while The O’s just missed out on a place in the Championship.

“I know they might have rested a few players, but the players that they bring in are still top players – we’re still going to show them a bit of respect

“We’re a good team – but like you said, we’ve matched them throughout the full 90 minutes.

“It was a sucker punch at the end, but it happens in football, so keep we’ll keep our heads up and move on.”

Next up for Blyth is Darlington in the National League on Saturday, with Tuesday night’s Northumberland Senior Cup clash with Newcastle U23s set to provide an opportunity for fringe and reserve team players to stake a claim.

And Laing, who will be rested in midweek, is looking forward to the rest of the season as Spartans turn their focus towards the league, with a playoff spot very much still up for grabs.

“I’m enjoying it being back. Obviously last week against Hereford, I was a bit rusty!

“I hadn’t played since the last time I was at Blyth, so I think I’ve found my feet now.

“I enjoyed the game today. I feel like I am fit now.

“I’m looking forward to the rest of the season. We’ve just got to try and do as best we can in the league.”