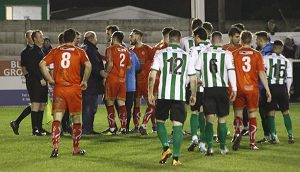 The centre-back rose highest from a Dale Gorman’s free-kick to head home as Spartans matched the National League leaders’ stride for stride at Brisbane Road for the majority of the game.

And almost snatched a deserved equaliser soon through Robbie Dale and Adam Wrightson – however it wasn’t to be for Alun Armstrong’s side.

Armstrong made one change from the side who lost 3-2 at Hereford – Jordan Watson replacing Jamie Holmes as Blyth switched to a 3-5-2 formation.

The visitors started on the front foot and almost forced an error from goalkeeper Dean Brill when Alex Lawless’ errant back pass was closed down by Dan Maguire – disaster narrowly averted by Brill.

Three minutes later, Maguire oversaw Blyth’s best opportunity of the half – this time found space in the penalty area with a deflected effort sailing agonizingly over the host’s crossbar.

From that point on, Orient began to test the Blyth back line, with Peter Jameson called into action a number of times.

The first of those came in the 10th minute when James Alabi tried his luck from the edge of the area – straight into the chest of Jameson.

Lawless and Gorman began to dictate the midfield – with the latter almost opening the scoring with a rasping drive – Jameson able to palm the effort away.

Jordan Maguire-Drew, a constant threat, should have done better when space opened up on the edge of the Spartans’ area – his tame effort claimed comfortably by Jameson.

With half an hour played, Jameson made another crucial intervention after Gorman went on a mazy run from the right and took aim from an acute angle before moments later lashing an effort goalwards – waved over the bar by Jameson.

The Blyth goalkeeper was left rooted to the spot when Alabi missed a sitter – glancing a Maguire-Drew cross wide from close range.

And shortly after, Spartans survived another nervy moment. James Brophy’s cross was turned toward his own goal by Nathan Buddle – straight into the chest of Jameson.

Early in the second half the hosts missed another golden opportunity. Maguire-Drew’s set piece was turned over the bar by Dan Happe at the back post – to Blyth’s relief.

In the 57th minute, Spartans had a huge appeal for a penalty. Substitute Shadrach Ogie man-handled Maguire in the penalty area but referee Lloyd Wood was left unmoved.

Wood did award a foul when Maguire ghosted past three defenders before he was scythed down by Turley.

Connor Oliver stepped up and lifted a 25-yard free kick over the wall and towards the bottom left hand corner – Brill tipping the elegantly round the post.

Spartans opened up Orient with a swift move in the 66th minute – a move involving Alex Nicholson, Maguire and Sean Reid led the Nicca having a shot, blocked by a last-ditch challenge.

With 20 minutes to go Maguire went close again. Running onto a Nicholson’s superb through ball as Maguire struck first time across goal – wide of the target.

A minute later Brophy broke away down the left wing with only a stunning sliding challenge from Buddle denying a shot on goal.

He picked up a loose Brill clearance and tried a lobbed effort from halfway – his effort falling just wide of the right hand upright.

Devastatingly for Blyth, the sucker-punch game six minutes from time when Turley rose highest from Gorman’s cross – powering a header into the top right corner as Spartans defender slumped to the floor at the cruel breakthrough.

Spartans almost levelled with a minute of normal time remaining. Oliver whipped in a left-wing set piece that fell at the back post to Robbie Dale.

His effort from close range was denied brilliantly by Brill – the rebound falling to Wrightson who took his time before connecting sweetly with a half volley, a diving block by an Orient defender securing a quarter-final berth for the National League leaders.